While most of the year you can find our Associate Naturalists leading walks and programs for the public in Cape May, every once in a while we get to take a field trip to explore somewhere we haven’t been yet, or haven't been lately. On July 19, eight of us took a day trip to Delaware to explore our sister cape, Cape Henlopen, the Delaware side of Delaware Bay, and pay a visit to our friends and allies in the protection of the Delaware Bay, the American Birding Association, headquartered in Delaware City. 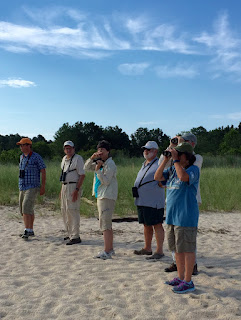 Our trip began on the 7:00am Cape May - Lewes Ferry. It was a gorgeous morning with clear skies and a calm crossing of the bay making for excellent views of inshore bottlenose dolphin as well as several good looks at WILSON’S STORM PETREL. Other birds encountered were a single Bonaparte’s Gull near the New Jersey side, a flyby Solitary Sandpiper, and two flocks of lingering (presumably non-breeding) Black Scoter, one about midway across and the other on the beach near the ferry terminal in Lewes, Delaware.

Upon arriving to Lewes we were greeted by several Osprey nests with young…the pair breeding right atop the boat lift at the terminal makes you question whether this species is susceptible to human disturbance! At least this pair doesn’t mind the constant attention. Once back on dry land we drove into Cape Henlopen State Park and stopped first at the Seaside Nature Center to walk the interpretive trail. Almost immediately we were greeted by both Ruby-throated Hummingbirds and BROWN-HEADED NUTHATCHES, the latter being a species that doesn’t regularly occur in New Jersey but is quite widespread in the state park on the Delaware side. Therefore seeing and hearing them, often quite comical in their antics, was a treat for all of us. Walking out to the water we found few birds, but once we reached the water Warren spotted a duck about a quarter mile away. Walking closer we realized it to be a Red-breasted Merganser, most likely another non-breeding bird that lingered through the summer. Our loop back to the cars turned up several of the regularly expected species, including Great-crested Flycatcher, Eastern Kingbird, and Eastern Wood-Peewee. 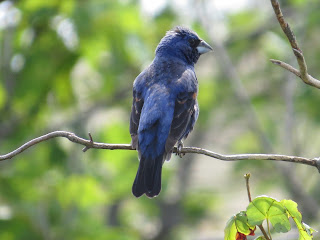 After a short break in the nature center we headed south to the parking lot opposite Herring Point, where we walked the newly constructed Gordon’s Pond connector trail - a state of the art multi-use boardwalk trail that traverses dunes, pine forest, marsh, and eventually Gordon’s Pond at the very south. This trail is very popular with day bikers and cyclists alike, and so requires one to pay close attention to where you’re standing! That said, the birding from here is excellent, and there are several pull-out sections that allow you to sit and enjoy the scenery while the commuters whiz by. At the beginning of the trail we spotted an Eastern Hognose snake. Eastern Hognose display some of the most fascinating anti-predatory behaviors. As Catherine Busch approached the snake, it flattened out its head like a cobra and assumed the strike position! Then it rattled its rattle-less tail mimicking a rattlesnake, and finally, once Catherine picked it up to show the group, it wrapped itself in a writing ball, defecated, and flopped its head back with its tongue lolling out the side; playing dead!!! Check out the photos for the full experience. 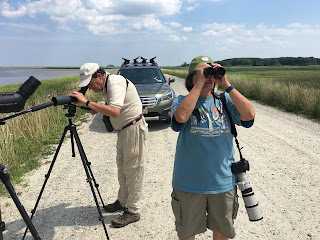 Along the 1.5 mile stretch we walked, we encountered several BLACK-NECKED STILTS, various expected terns and gulls, Blue Grosbeak, Orchard Oriole, Indigo Bunting, and more of the common marsh/scrub species. Several more Brown-headed Nuthatches were also seen and heard along the trail. While several species of dragonfly were present, the Seaside Dragonlet (Erithrodiplax berenice) was the most abundant as we crossed the salt marsh. Males and females of varying ages, and therefore varied in color and pattern, were everywhere. 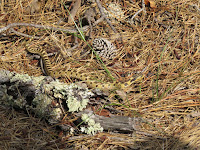 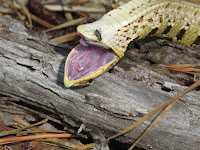 Doubling back, we returned to our cars and headed for Bombay Hook, but not without first stopping at the famous Sambo’s Tavern for some local seafood and a cold drink to temper the rising heat of the day. 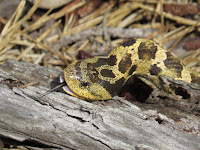 Although we arrived as the tide was falling fast, Bombay Hook still produced good numbers of shorebirds and wadingbirds. Hundreds of Short-billed Dowitchers (no definitive Long-billed this time though) joined a mix of Semipalmated and Western Sandpipers, with Westerns in much higher numbers than we typically get in New Jersey.  More Black-necked Stilts were present along the refuge drive, while Cattle, Great and Snowy egrets joined Great Blue and Little Blue herons. We were unable to turn up any American Avocet, which are common here in the late summer, probably due to the poor timing with the tides. Even still, Bombay Hook is aways worth the visit, even if you spend an equal amount of time trying to deter the greenhead flies from biting you as you do scanning the flats for the odd shorebird!

Leaving Bombay Hook we headed for Delaware City where we would meet up with Jeff and Liz Gordon, the President and First Lady of the American Birding Association. Delaware City is a quaint town with a great little waterfront on the Delaware River, just above the mouth of the Delaware Bay. This town is the gateway to the Delaware marshes and now boasts a 14 mile bike path connecting Delaware City to Chesapeake City. The bike path terminates (or begins, depending on your destination) right outside the American Birding Association headquarters, a four-story building with a rich history as a hotel, seafood packing house, and rowdy bar. Fully restored now it’s a beautiful example of historic preservation meets modern amenities. Jeff and Liz gave us the full tour, which wrapped up with a few beers on the back deck where we engaged in a great conversation of the history of the ABA, and the future of birding. 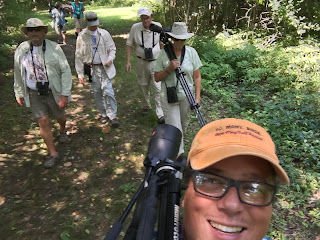 Also right outside of ABA headquarters is the dock for the ferry to Fort Delaware, located on Pea Patch Island a mere mile out into the river. On the island is both a heron rookery, and a great living history exhibit within the walls of the fort. On this trip we decided not to venture out to the island due to time, but did spend an hour watching the herons flying back to the rookery as the sun set. It was quite beautiful with Cattle Egrets, Little Blue Herons, Great and Snowy Egrets and Glossy Ibis making up the bulk of the birds. A Black-crowned Night-Heron made an appearance just before we headed to dinner.

Dinner was had at Lewinsky’s on Clinton, a great little gastro-pub which also happened to be hosting trivia night. You can imagine, with a team of associate naturalists, who won that game; We did! Following dinner we made our way back to Cape May via the Delaware Memorial Bridge, completing our full circumnavigation of the great Delaware Bay, and introducing us (or reintroducing us) to some of the wonderful birding and birder-centric stops in our neighboring state.

For anyone interested in joining us on a future visit to Delaware, CMBO and the Nature Center of Cape May are teaming up for a “Birds and Beers by Bike” tour of the twin capes. Saturday August 13th will be the Cape May area, and Sunday August 14th will be Cape Henlopen in Delaware.

Click Here for more information, and contact the Nature Center of Cape May to register; this trip is always a ton of fun! 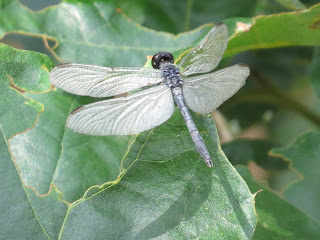 Photos by Barb Bassett, B.J. Pinnock and the Author

July is sometimes thought of as a slow month for birding, but shorebird migration is ON in a major way in the Cape May area, with new birds arriving from the northern breeding grounds in the boreal forest and Arctic tundra each day. In a series of posts, we will focus on a few species of shorebirds to help get us ready to identify and enjoy watching these migration athletes in flight!

Solitary Sandpipers have started to move through the mid-Atlantic region on their southbound migration, though they are a bit harder to detect than the obvious flocks of yellowlegs and dowitchers that are rushing through along the coast right now. Solitary Sandpipers tend to migrate in a, well, solitary fashion, and it's fairly easy to overlook one. 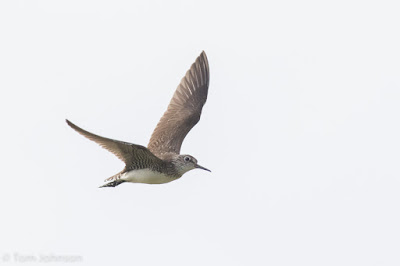 One tip that can help you detect and identify more Solitary Sandpipers is simple - learn the flight call! The thin, high flight call is typically doubled in a piercing "Tsee-Tsee!", higher and apparently less variable than similar calls given by Spotted Sandpipers.

To have a listen, check out this great recording from Mike Andersen at the Cornell Lab's Macaulay Library: http://macaulaylibrary.org/audio/132487

The flight calls on the recording starting at the 15 second mark are the ones that I hear most frequently on migration.

So, you hear that sharp "Tsee-Tsee!" call - what next? Look up! Typically, a Solitary Sandpiper makes that doubled call in flight. Dawn and dusk are particularly good times to see these shorebirds flying over, but it can happen at any time of day.

Solitary Sandpipers are small members of the genus Tringa, the same genus that includes the yellowlegs and Willet (and a number of Old World species that we won't discuss here). Yellowlegs, Lessers in particular, are relatively similar in appearance to Solitary Sandpipers, but they are longer in wingspan and body length, with longer legs that stick out farther beyond the tail in flight (on Solitary, just the tips of the toes project beyond the tail in flight).

Two things in particular stand out to me when I see a Solitary Sandpiper in flight:

1) Dark underwing. The underwing coverts of a Solitary Sandpiper are barred dark and white, but in real life when a Solitary flies overhead rapidly, this pattern just appears really dark, contrasting strongly with the bird's white body. Yellowlegs have a lot more white in the barred underwing coverts, so their underwings don't contrast nearly as much with their white bodies. 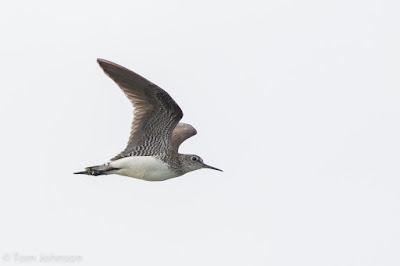 2) Flight posture and style. Solitary Sandpipers cover a lot of sky in flight while in a tucked position with the wings mostly folded in to the body. This gives the bird's flight a bounding look with the wings outstretched for relatively short periods of time during each quick flap. In comparison, yellowlegs have more regularly spaced wingbeats and aren't nearly as bounding in flight. 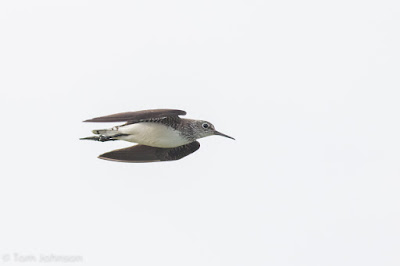 These three photos are all of the same Solitary Sandpiper flying over at the Meadows (AKA The Nature Conservancy's Cape May Migratory Bird Refuge) in Cape May on 17 July 2016.

Check this space for more identification tips and updates on shorebird migration. Good luck out there!
Posted by Tom Johnson at 11:35 AM