The fascinating beauty and biology of Monarchs will be on display for this School of Birding Workshop. Spend a day in the field with the Director of the CMBO Monarch Monitoring Project,  visiting gardens and other natural areas around Cape May Point to watch monarch behavior and see the principles of butterfly gardening in action.  Learn how to safely handle and tag monarchs, and also learn methods for conducting field research into these migratory insects.  Visit the CMBO Northwood Center to see the terraria where monarch caterpillars and chrysalides are on display, and learn about the proper husbandry of such displays.  We will take time to identify many other butterflies that can be found at this season in Cape May Point, and we’ll identify a few of the migrant birds that are sure to be around, but the primary focus will be on monarch biology all day.  There will be a short indoor illustrated talk on monarch biology, but most of the day will be in the field in Cape May Point. 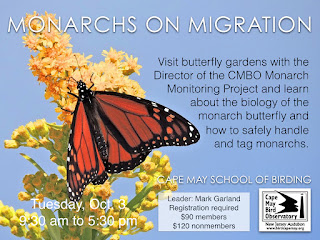 Experience the cutting edge of birding! Birds don't sing much in the fall - but they sure do call. Chip notes, flight notes, and critical listening are the primary subjects of this workshop, led by the man who wrote the book (well, maybe the CD-ROM) on flight calls. Two hours with Michael equals years of struggle on your own! Includes optional night-time listening for nocturnal migrants. Learn to dissect a single note, determining whether it rises or falls, is clear or burry. You will never listen the same way again. This workshop is spread over two half-days to allow us to be in the field at the best time of day; it includes an evening session to study nocturnal migrants, followed by an early morning listening session the next day - the perfect way to learn the subject! Hope you'll join us for this exciting School of Birding Workshop. 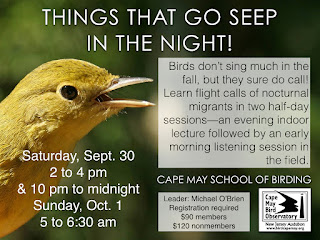 FALL MIGRATION AT CAPE MAY with Louise Zemaitis, Sept. 14-16

September straddles the migratory timetable; you're not too late for shorebirds, not too early for hawks, and right on time for warblers and other neotropical migrants. Indeed, it is the great variety of songbirds heading south during early September that will be the main target of this three-day birding workshop and we shall have ample opportunity to learn these birds both by sight and sound. Join accomplished local guide and artist Louise Zemaitis for a wonderful birding experience on this School of Birding Workshop! September 14-16, 7:00 am - 4 pm. $225 members, $300 nonmembers.

Register now or get more details at: CMBO School of Birding 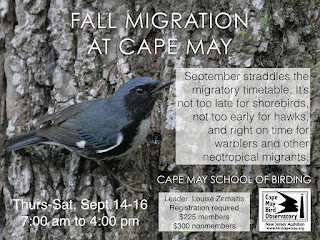 Each fall, as birds and butterflies pour through Cape May on their way to winter haunts, CMBO keeps its fingers on the pulse of migration. To accomplish this, we have gathered a stellar group of counters and naturalists for our four count sites and Monarch monitoring. Along with the George Myers Naturalist (9 month position that starts is April), they are the face of the organization in reaching out to the multitude of visitors and performing the research to back up our conservation efforts. With the Morning Flight, Cape May Hawkwatch, Monarch tagging and census, and Montclair Hawkwatch underway, they are already hard at work (Avalon Seawatch starts September 22). Please welcome them to Cape May!!!!!
Stephanie Augustine – Monarch Field Naturalist 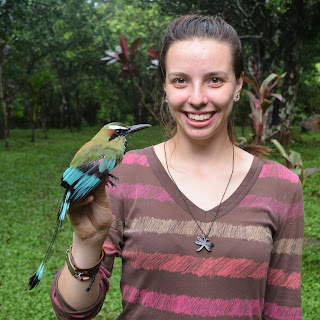 Stephanie Augustine has been surrounded by nature ever since she was two years old watching the cicadas emerge and fanning their wings to dry them. Every summer, she raised and released monarch butterflies, sketching life cycle stages and charting the caterpillars' progress through their instars. A childhood spent watching David Attenborough documentaries fostered a passion for wildlife, conservation, and education, and after finishing her B.S., became a Conservation Educator at a zoo, where she worked with animals of all shapes and sizes and taught educational programs. Her thirst for adventures led to a field technician position in Costa Rica banding birds (including the Turquoise-browed Motmot in her photo). And now, joining the team in Cape May as a Monarch Naturalist is a new adventure, combining her childhood love of butterflies with her desire to contribute to conservation research and continuing to work outdoors. She looks forward to the upcoming days spent chasing monarchs and learning more about these beautiful and incredibly tough creatures. 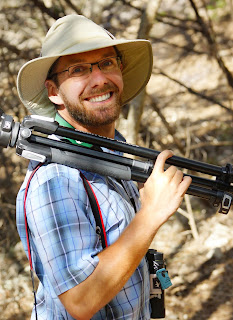 Erik Bruhnke has had a love for birds since he was a child. He graduated from Northland College in Wisconsin with a Natural Resources degree in 2008. Erik taught field ornithology various times at Northland College. Following his first six fall seasons following college, Erik worked as an interpreter at Hawk Ridge Bird Observatory in Duluth, Minnesota and was a board member of the Duluth Audubon Society. He has counted migrating raptors at the Corpus Christi HawkWatch in Texas. Erik’s wildlife photography has won national awards, and his writings have been featured in Birder’s Guide via the American Birding Association, BirdWatching, and Birdwatcher’s Digest. Erik leads tours for Victor Emanuel Nature Tours as well as his own business, Naturally Avian Birding Tours. He loves to cook and bake in his free time, often while sipping bird-friendly coffee.  Erik is thrilled to return to Cape May for his second consecutive year of counting the raptor migration! 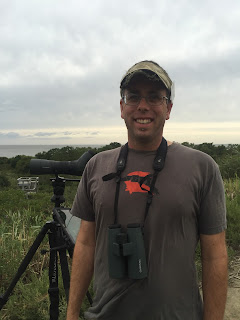 Glen hails from Brooklyn, NY, but has called Cape May home for more than 17 years. Simply put, he loves living and birding here! Working for CMBO in the fall of 1999 (and subsequently in 2007, and 2014-present) made the biggest of impacts on him. Glen has/has had lots of jobs: professional tour leader, biological consultant, start-up-tech-company tech, grad student, bartender, musician, school teacher, garbage man, veterinary technician to name a few. He has traveled, explored, and birded in 47 states and over 20 countries. Glen has worked seasonally for CMBO as a researcher, naturalist, and salesperson and is very excited to be returning for a third consecutive year as the 2016 fall season's official songbird counter with the Morning Flight Project. He resides and engages in BBQ in Cape May Point with his wife, Christina "Kashi" Davis. 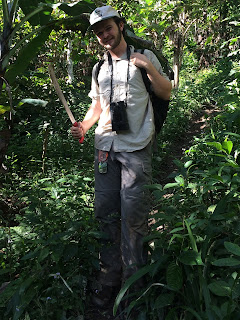 Andrew Dreelin fell in love with birds, birding, and ornithology during his sophomore year in high school, and shortly thereafter fell down the rabbit hole (or should it be petrel burrow?) of birding passion, leaving his humid hometown of Columbus, Georgia to pursue an education in ecology and evolutionary biology at Cornell University in frigid upstate New York. He is now freshly finished with his undergraduate education, and eager to get back into the real world and help connect people to biodiversity with a positive spirit.

Andrew is equally happy to put you on a bird, point out key field marks, or talk your ear off about any aspect of ornithology or ecology and evolution. At the end of the day, he has a passion for all of the biodiversity that we share this planet with, and looks forward to sharing and experiencing all of the magic that Cape May has to offer, together with everyone who comes to visit! Chris Payne was born and raised in western Pennsylvania and began birding with his parents as soon as he was old enough to hold his own binoculars. He graduated with a biology degree from West Virginia University in 2015. Since then, he has worked with horseshoe crabs in Maryland, Cerulean and Golden-winged Warblers in New Jersey, and was a member of the Florida Keys Hawkwatch last fall. He’s now looking forward to manning the Montclair Hawkwatch this season! 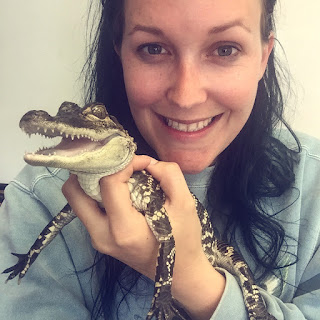 Erin was born and raised in sunny Florida just ten minutes away from the beach, and has actually seen an alligator crawl out of a storm drain.  While attending college at the University of Florida (go Gators!), Erin began working with local nesting Northern Mockingbirds, and she hasn’t looked back since. Since graduating college Erin has worked in Florida, New Jersey, Costa Rica, Texas, and Georgia, working with birds and as an environmental educator. Erin is excited to come back for another fall in Cape May after working as an Interpretive Naturalist in 2015. 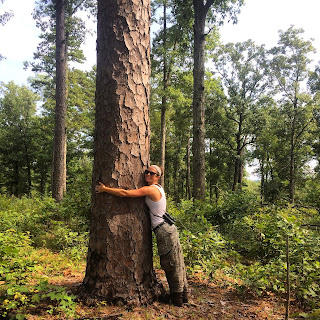 Melissa has been an avid birder and field biologist since 2008 and has been fortunate to travel and work throughout the country, including four falls right here in Cape May (first as a naturalist then two seasons as the Hawk Counter). A Virginia native, she’s contributed to various projects involving threatened and endangered songbirds, Saw-whet Owl migration, and most recently, the effects of environmental lead (Pb) in breeding birds. After completing her Master’s degree from the University of Missouri this past December, Melissa is very excited to return to beautiful Cape May this fall as the Migration Count Coordinator. 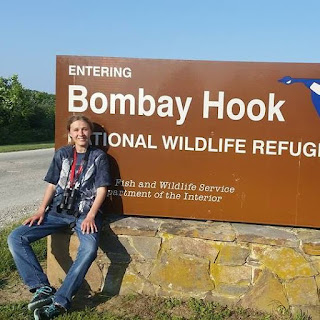 Carolyn Rubinfeld received her Bachelor's of Science from Fairleigh Dickinson University in 2013 and Master's of Biology from Montclair State in 2016. At FDU, she studied the effects of human trail traffic on tree leaf damage, insect abundance, and bird abundance. During the course of this study, she learned to bird by ear and eye at the Scherman Hoffman Wildlife Sanctuary. In the last two years, Carolyn has traveled all over the tri-state and beyond to admire birds while completing her degree and a term of service as an AmeriCorps New Jersey Watershed Ambassador. Her favorite places to bird include the Great Swamp National Wildlife Refuge, DeKorte Park, Duke Farms, Garret Mountain, and "Brig" or Edwin B. Forsythe National Wildlife Refuge. Beyond birding, she also enjoys watching "herps" (reptiles and amphibians), hiking, singing, and volunteering as a pet therapy club 4-H leader. 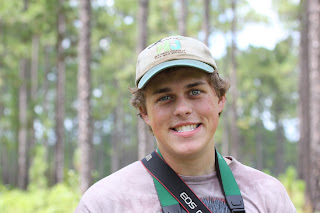 David is a Cornell graduate and South Jersey birder from Newfield, NJ.  He has worked a variety of other jobs, from behavioral observations of Acorn Woodpeckers and Red-backed Fairywrens, to breeding bird transects in NH, and as a naturalist and tour guide at the Cornell Lab of Ornithology.  He is most interested in bird migration, abundance, and status and distribution over time and space.  David was the Montclair hawkwatcher last fall and is excited to return to CMBO as the Avalon seawatcher and experience the spectacular migration along the Cape May coast. 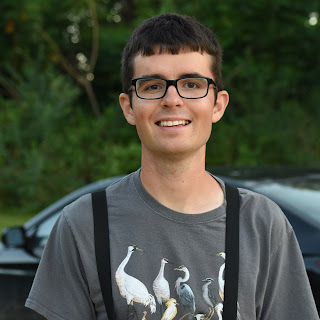 Benjamin West is an Iowa native, and graduated from Bowdoin College in Brunswick, Maine in 2016, with a Bachelor of Arts degree in Biology. Since graduating, he has served as an avian field technician in Newfoundland, Arizona, and Wyoming. He’s been birding for about 16 years, and his favorite bird is the Pileated Woodpecker. In addition to birding, Ben enjoys foraging, cooking, photography, and improving his plant identification skills. 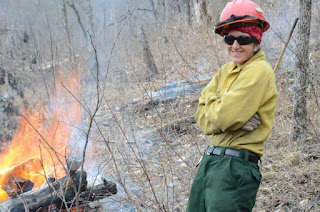 Rebecca Zerlin graduated from Unity College (in Maine) with a double major in Wildlife and Ecology. Since graduating, She has held a few seasonal jobs in the conservation field.  Her favorites so far have been working on prescribed burns and monarch tagging, so she is very excited to be joining the monarch team at Cape May!

Growing up, Rebecca remembers learning about metamorphosis, with the Monarch being used as the model. Since then, she has always been so excited to see one flying around. It takes her right back to being a kid again, a feeling she thinks is shared by a lot of people. She loves how passionate people are about Monarchs and can't think of anything better than seeing that excitement from people as they learn about them.
Posted by Brett M. Ewald at 1:29 PM