Join CMBO Program Director Brett Ewald on this exciting Cape May School of Birding Workshop. Over ten species of diurnal raptors and owls are possible, thanks to southern New Jersey's mosaic of prey-rich habitats. We'll spend time going over identification challenges and highlighting features to look for. You'll see a lot of other great birds too, along with some of the most beautiful and remote landscapes on the Eastern Seaboard. Learn to find and recognize good wintering hawk and owl habitat. Past years have featured hunting Short-eared Owls, Rough-legged Hawks and Golden Eagle. The bulk of this workshop is in the field, with an indoor session to heighten your understanding of wintering birds of prey. 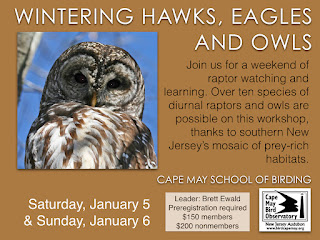 We had a great time on the CMBO Special Field Trip to the Barnegat area on Saturday, December 8th. The weather cooperated with lots of sun and light winds as we gathered at Barnegat Light State Park and proceeded to explore the jetty and beach areas. Waterfowl and loons were very much in evidence, with close looks at Common Loons, Long-tailed Ducks, Brant, Black Scoters, and Common Eiders. At least 7 Harlequin Ducks (males and females) were feeding in the waves, along with Bufflehead, Surf Scoters, and Red-throated Loons, while a couple Northern Gannets glided by in the distance. Several groups of shorebirds passed by, involving Dunlin, Sanderlings, and Ruddy Turnstones (one Purple Sandpiper was seen on the distant jetty). Away from the water, our attention was grabbed by a lone Ipswich Sparrow, 3 Horned Larks, Merlin, and Sharp-shinned Hawk. After lunch, we visited some nearby areas to view the back bay waters, and were rewarded with both species of Scaup, Common Goldeneyes, an adult Lesser Black-backed Gull, lots of Bufflehead, Red-breasted Mergansers, and even a Horned Grebe. Two very close Purple Sandpipers were a highlight of the trip. All together, we enjoyed 48 species and the camaraderie of fellow birders.

Join us on our next Special Field Trip and start the new year right - Kick Off Your Year List on Tuesday, January 1. Register and get more details at: CMBO Programs

There's still time to join Program Director Brett Ewald and CMBO naturalists for some exciting December birding at Barnegat Light State Park. Harlequin Ducks and Purple Sandpipers are almost guaranteed, along with scoters, Common Eiders, gulls, Northern Gannets and other winter specialties, such as Snow Buntings and Ipswich Sparrow. Past rarities have included Razorbill and Black-legged Kittiwake. This trip involves a long walk over sand and jetty, and is often windy and cold, but always productive. Hope you'll join us. 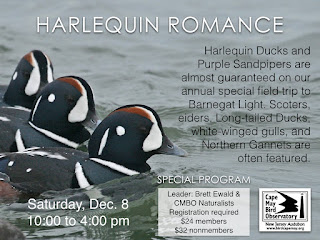