Register now for this Sunday's trip to Edwin B. Forsythe NWR (aka Brigantine). After birding the refuge, the group will head to nearby Mott's Creek for raptor watching. Join Janet Crawford and other CMBO Naturalists by contacting our Program Registrar at (609) 400-3864 or by email to cmboregistrar@njaudubon.org
Posted by Catherine Busch at 12:12 PM


January 14 & 15, 2017
Pete Dunne and Brett Ewald
Our first School of Birding workshop of the year was very rewarding, as a nice mix of raptors and other birds were studied and appreciated. A fun group of 15 participants made the workshop even more enjoyable, totaling 57 species (summary below).
The morning of the first day was spent surveying several bayshore locations, searching the extensive marshes for winter visitors and those that are already starting courtship for the upcoming breeding season. Stops included Thompson’s Beach, East Point Lighthouse, and Jake’s Landing. We were treated to the various ages and plumages of Northern Harrier, including an actively hunting adult male – Gray Ghost – a beautiful example of a species adapted for that habitat. Bald Eagles were very prominent, with numbers of adults and a few immatures seen. One presumably local pair was constantly escorted out of one area by a diligent pair of resident Red-tailed Hawks. At least five Short-eared Owls were patrolling the distant marshes, resulting in several inter-species interactions, as well as passes made at Northern Harriers and Bald Eagles. A lounging Peregrine Falcon on one of the platforms took it all in stride. Vultures, mostly Turkey, were always rocking back and forth over the surrounding landscape. The flashing past of a Sharp-shinned Hawk helped to conclude the morning’s sightings.

Some showers in the afternoon gave us a chance to get acquainted and go over the morning’s checklist at the Observatory’s Center for Research and Education. A presentation on the wintering raptors of New Jersey allowed for a comprehensive review of identification features and discussion on behavior, seasonality, and habitat.

The second day found us exploring coastal areas, this time on the Atlantic Ocean side. Our first stop was the famous Brigantine section of the Edwin Forsythe National Wildlife Refuge, where dikes though the tidal marshes allow for an immersion within the habitat. Renowned as a waterfowl stopover location, we were surrounded by many geese, ducks, and swans, with an occasional Great Blue Heron thrown in. The vocal flocks of Snow Geese were especially notable. Of course, where there is a prey base, there will be raptors. Bald Eagles were constantly perusing the area, often putting up flocks of birds as they passed. Northern Harriers also seemed to be coursing everywhere on the refuge. At least two Peregrine Falcons were present – one adult loafing on a post. A Northern Harrier made quite a show of expressing its displeasure at having the Peregrine around.

The environs of Mott’s Creek proved a relaxing environment to observe raptors in the afternoon, with Northern Harriers once again providing almost constant motion. The highlight here was our only Rough-legged Hawk of the workshop – a northern breeder that is only present in very small numbers in New Jersey. A Common loon drifting by and a Belted Kingfisher also caught our attention while scanning for raptors. All in all, a perfect setting and ending to another fantastic workshop.

It's a New Year, and a great time to come birding in Cape May!

Now that the New Year is underway, it's time to sign-up with CMBO for winter birding workshops and field trips!
Coming up next week, Pete Dunne's Wintering Hawks, Eagles, and Owls two-day workshop and a new field trip, Coastal Birding at Two Mile.
To register, call our Program Registrar at (609) 400-3864 or email her at cmboregistrar@njaudubon.org 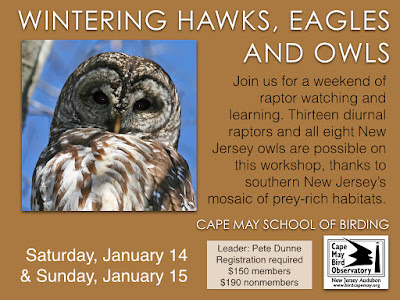 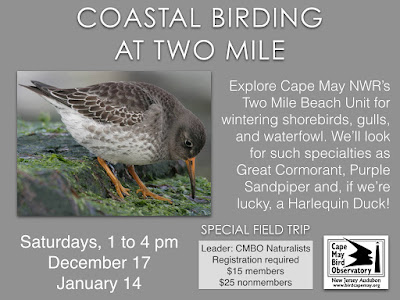 Posted by Catherine Busch at 10:34 AM