Well, as I pointed out in yesterday's post, although Steve Huy had noted a Snowy Owl leaving Cape Henlopen at approximately 2:13pm, and I was able to locate a Snowy Owl on Cape May Point at approximately 2:47pm, 34 minutes later and plenty of time for the bird to have crossed, photographs provided by Steve this morning show that the two owls are not the same! Thanks to Keith Betts, who snapped a few photos before the bird took off, we can confirm that the owls were indeed different individuals. Here are two photos of the bird that left Cape Henlopen yesterday afternoon around 2:13pm.

and here, again, is the bird found on Cape May Point at approximately 2:47pm:

The bird from Cape May Point, while showing some dark markings on the wings and breast, was considerably lighter marked throughout than the Cape Henlopen bird. The Cape Henlopen bird appears to be a classic Juvenile Female bird, large, and very dark. The bird at Cape May Point is unknown as to age/sex but if a juvenile bird it could be male or female. Without a good look at the spread tail, or better yet, direct measurements like wing chord length and body weight, it's very hard to tell. One thing we do know for sure, though, is that there are many snowy owls throughout the northern US right now, with New Jersey hosting upwards of a dozen individuals (but quite possibly more than that).

A dreary day turned SNOW day on Cape May Point

As I sat at my desk at the Northwood Center, working on my recent Cuba trip report (I promise I'll finish it this week), I got a text message from friend and Project SNOWstorm collaborator Steve Huy.

I noted the interesting sighting, but considered staying at my desk and finishing up the report...but the time it takes for a given species to cross Delaware Bay, from Cape Henlopen to Cape May, is something of interest to us at CMBO and something we try and track during fall migration as raptors stream over the bay on their southbound pilgrimage. Armed with that self-imposed task, I grabbed my camera and headed over to the Coral Avenue dune crossover. In the time it took me to get motivated, grab the camera, and head out the door, my arrival at Coral Avenue was approximately 21 minutes after the initial text from Steve. Based on other raptor crossings, I knew that this bird could have made it across in 15-20 minutes, so whether I would see the bird actually crossing open water seemed like a long shot. I scanned over the bay and picked up a few birds on the water: a small group of 4 Greater Scaup, a few Red-throated Loons, a lone Black Scoter, a few lines of scoter way out (Black or Surf; I couldn't tell with only my binoculars). Then a large distant bird could be seen coming directly towards me and my heart skipped a beat, but quickly recovered when I realized it was only a young Herring Gull (born last summer, and quite bleached out light brown). A few more gulls later, and a nice flyby calling Bonaparte's Gull, I still lacked any sign of the great white Arctic owl.

"Just a few more minutes", I told myself, as my mind wandered to the report I had left in limbo back at the office. I walked down to the water's edge to get a better look at the scaup, and continued on to the west wondering if the bird Steve had seen might have made landfall here and settled into the dunes.

I never saw the bird come over water, and I never saw it take off from the dunes, but before I knew it I saw it flying around the corner in front of me. I still don't know where it came from, and until I see photos to compare, at this point I don't know if it's the same bird that Steve had seen heading north from Cape Henlopen, but one thing was for sure: there was a Snowy Owl on Cape May Point! I walked up the beach quickly in order to determine whether the bird had flown on or perched, and realized it was indeed posted on a nice piling, in the dunes between two of the main crossovers. I backtracked to the perimeter road and walked the pavement to Surf Avenue, where from the dune crossover I could see the bird, relaxed but aware, taking in the dune scenery. Doubling back again I headed to the Cape Avenue dune crossover which put me about equidistant, but at a better angle given the light, and enabled me to spend a few minutes observing the bird, noting its plumage, and snapping off a few photos to compare to Steve's later tonight. I did notice that the bird was not carrying a transmitter, so is not one of our currently tagged birds. Whether or not it was the "big, dark female" Steve had mentioned remains to be seen. Stay tuned for an update later this week.

Of course the real adventure is in the journey, not necessarily the destination, and while the Snowy Owl was an absolute treat, getting outside on this otherwise dreary and cold day was something I didn't expect to do, but in hindsight really needed. There were numerous American Robins littering the lawns on Cape May Point, feeding on whatever berries or worms they could procure (the ground is well thawed right now, for a little while at least), accompanied by White-throated and Song Sparrows. Having run into Mike Pasquarello at Surf Avenue, I also heard that there was quite a Bonaparte's Gull show down at Sunset Beach near the Concrete Ship. No doubt a Black-headed Gull or two is somewhere to be found for the intrepid birder, as two were present on the Delaware Bay shore on Friday.

If you're looking for some help getting out this winter, this Saturday has several great options including our Birding Cape May Point walk from 8:00 - 10:00am (meeting near the Hawkwatch platform at Cape May Point State Park; $10 - Non-members; $6 - Members; FREE - Life Members) and the Cumberland County Winter Eagle Festival.

Click here to download our Kestrel Express which includes all of the offerings taking place this winter, of which there are many in February, which (gasp) is right around the corner!

Long-tailed Ducks court during the weeks surrounding Valentine's Day, with the males yodeling melodically to their mates.  We'll search for Long-tailed Ducks and many other waterfowl in the ocean, bays, inlets and ponds from Avalon to Cape May Harbor, enjoying all that late winter has to offer. Join Chuck and Mary Jane Slugg and other CBMO Naturalists on this exciting Special Field Trip. Preregistration required. 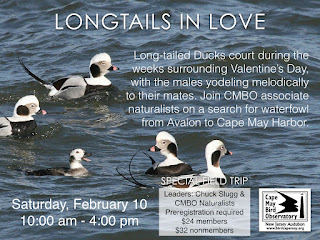 Ducks and geese are massing and Northern Harriers will be hunting. Short-eared Owls, eagles, and Rough-legged Hawks are also possible. Join Janet Crawford, Karen Johnson and CMBO Naturalists on this Special Field Trip for an exciting day of winter birding. Takes place at Edwin B. Forsythe NWR. After birding the refuge, the group will head to nearby Mott's Creek for more raptor watching. Preregistration required. 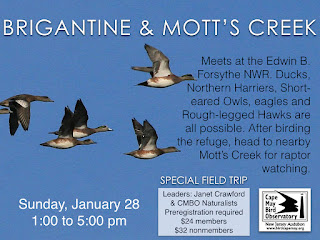 We had a wonderful couple days searching the extensive marshes along the Atlantic Ocean and Delaware Bayshore for raptors of all kinds on this exciting School of Birding Workshop. These marshes play host to a large diversity and number of raptors and other birds, as evidenced by the checklist below. Bald Eagles and Northern Harriers were especially numerous, allowing for the study of various plumages relating to age and sex. We encountered numerous adult and juvenile Bald Eagles, with several two and three-year old birds seen, as well. Northern Harriers were overwhelmingly in the juvenile category, but several adult females were noted, along with a single “Gray Ghost” adult male. Interesting behaviors were enjoyed both days, including a Merlin unsuccessfully chasing a Yellow-rumped Warbler and harassing a Cooper’s Hawk, a Red-tailed Hawk mantling carrion to discourage Turkey Vultures, a Short-eared Owl dive-bombing a Rough-legged Hawk, and a Rough-legged Hawk forcing a Northern Harrier to drop its prey. The adult Peregrine Falcon that passed by in the glowing sunset at Jake’s Landing was carrying some sort of prey. Even the gulls were very predatory, as we watched a Great Black-backed Gull catch and dispatch a Bufflehead along the beach. It was a fun weekend with many highlights, including an adult Golden Eagle. Although focused on raptors, a full accounting of the 62 species encountered is below:

We are embarking on a first-of-its-kind, citizen science study in January and February - a survey of wintering "Ipswich" Savannah Sparrows at selected sites throughout the coastline of New Jersey, from Sandy Hook in the north all the way around Cape May Point and up the Delaware Bayshore. Past observations have shown that the dunes and marshes of NJ are a preferred habitat for this unique subspecies with a restricted breeding range on Sable Island, Nova Scotia, Canada. We are also hoping to note the presence of color-banded individuals from the breeding grounds this past summer. We have selected the target dates of January 20 and February 17 for 2018 (with a bad weather day the following day). You can find out more about this fascinating bird in an article by Michael Kilpatrick in the 2017 Peregrine Observer - available to members or for purchase at NJ Audubon centers. If you have an interest in participating, and can identify and separate Ipswich Savannah Sparrows, please pass along you interest ASAP to Brett Ewald, Program Director at brett.ewald@njaudubon.org and get involved!

Join CMBO's Associate Naturalists on this Special Field Trip to the Cape May National Wildlife Refuge's Two Mile Beach Unit. We'll see shorebirds, gulls, and waterfowl as we walk the beach to the Cold Spring Jetty where we'll look for Great Cormorant and Purple Sandpiper. We'll go to the duck blind overlooking the salt ponds, and, if there's time, we'll visit a nearby back bay location for other wintering waterfowl. A great afternoon of winter birding. Preregistration required. 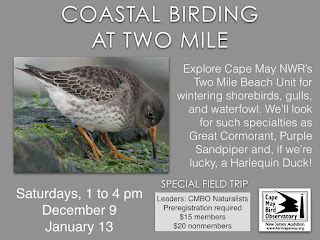 Over ten species of diurnal raptors and owls are possible on this School of Birding workshop, thanks to southern New Jersey mosaic of prey-rich habitats. You'll see a lot of other great birds too, along with some of the most beautiful and remote landscapes on the Eastern Seaboard. Learn to find and recognize good wintering hawk and owl habitat. Past years have featured hunting Short-eared Owls and Rough-legged Hawks. Join Program Director Brett Ewald for two days of  exciting winter birding. The bulk of this workshop is in the field, with an indoor session to heighten your understanding of wintering birds of prey. Preregistration required. 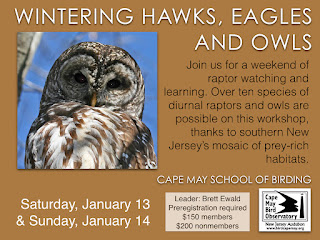