As each new bird for Cape May turns up, is observed, photographed, considered by learned committees and added to the ever-growing list, it becomes ever harder and harder to predict what the next 'big one' will be. An element of predictability exists around some species perhaps, but today's new bird came right out of the blind spot; just three quarters of the way back behind your left shoulder, right where the door post prevents you seeing that little spot that isn't covered by either your wing mirror or your rear view!!

Today's new bird was discovered by Rob and Lisa Fanning as they birded the front and backyard feeders at Cape May Point. Feeders that this year have already produced White-winged Dove, Painted Bunting and Black-capped Chickadee. As Rob and Lisa checked out the House Sparrow flock on Harvard Avenue, there, right on the pile of sunflower husks underneath the feeder was a wonderfully spotty-cheeked Eurasian Tree Sparrow! Although the bird disappeared after a few minutes, Glen Davis soon relocated it on nearby Lincoln Avenue and, before long, the masses were once again descending on the little borough of Cape May Point. As I write, the bird is still commuting back and forth between Harvard, Lincoln and Lehigh Avenues. 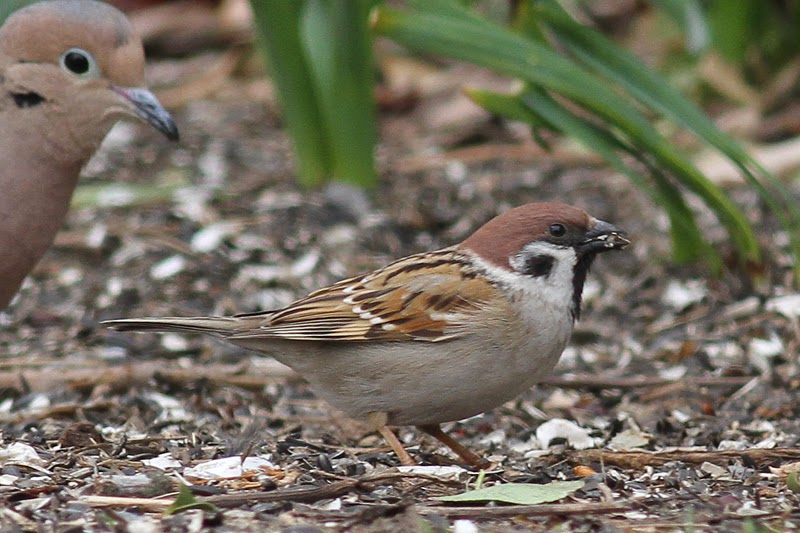 Eurasian Tree Sparrow on Lincoln Avenue today. This species is a little smaller than House Sparrow with a chestnut crown and a prominent black spot on the ear coverts. Upperparts are paler, tawny-colored compared with House Sparrow, the rump is brownish rather than gray and the wing bars are more prominent on average [photo by Mike Crewe].

Eurasian Tree Sparrow was introduced to the USA in Lafayette Park, St Louis, Missouri in 1870. From this original handful of 10-20 birds (accounts vary), the population has expanded to perhaps 50,000 birds (again reports vary, from 15,000 to 150,000!), spilling out from Missouri into neighboring parts of Illinois and Iowa with a general northward trend to the spread of the population. A look at eBird data reveals very few reports outside of this core area but, over the years, there has been a scattering of well-documented occurrences as far north as southern Canada in the Great Lakes region, with two records from the north coast of Lake Erie. Vagrancy to the west of birds from the species' native range in Eastern Asia is as yet unrecorded - though the species is abundant in eastern Asia, where it replaces House Sparrow as a commensal of man. Similarly, there has been no evidence of vagrancy to the east coast of North America from Europe (where the species has suffered massive population declines over the last 25 years or so). 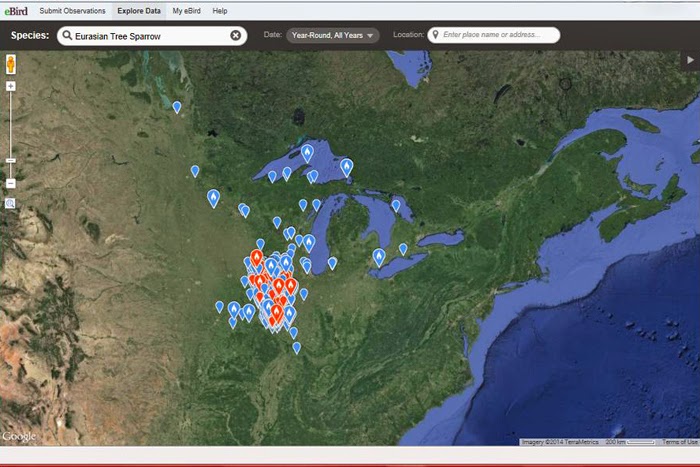 Current eBird records of Eurasian Tree Sparrow in North America. Red points show the most recent reports (last 30 days) and all fall within the current known breeding range of the species.

So what chance of this being a wild bird? Well, though Eurasian Tree Sparrows are known to be kept in captivity, they are not brightly colored nor are they accomplished singers, so it is unlikely that the captive population consists of more than a handful of birds. Turning to the range of the introduced population, proven vagrancy (albeit only involving a few records) to the Great Lakes is certainly interesting; given the winter we have just been through (and seem likely to see more of yet!), a bird turning up right now is very interesting. It is clear that large numbers of waterbirds fled the Great Lakes area as the lakes themselves froze over and remained frozen for long periods. Coupling this with above average numbers in South Jersey of species known to winter in the Great Lakes area in good numbers (e.g. Red-necked Grebe, Redhead, Canvasback), it seems apparent that there was a drift of birds southward and eastward, away from the big freeze. It is not beyond the bounds of possibility that this Eurasian Tree Sparrow could have pushed eastward and southward to escape the worst of the weather. It may then have wintered somewhere on the east coast and now be pushing back north - the same scenario is also possible for last week's Le Conte's Sparrow at Stone Harbor Point.

If this circular route to Cape May via the Great Lakes is indeed the case - what might we speculate on for the next new bird here?!! 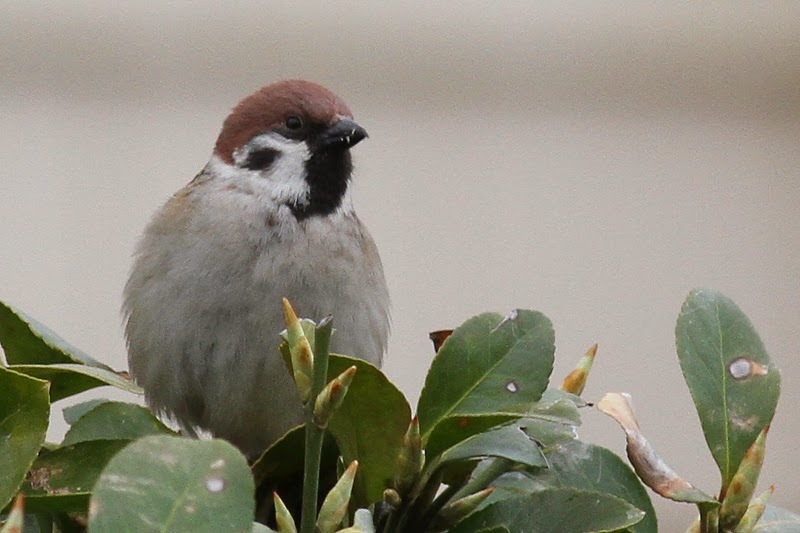 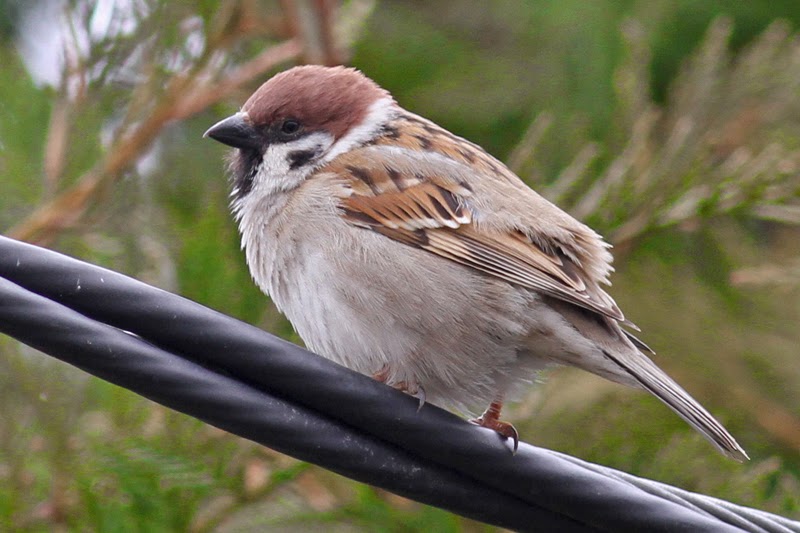 Eurasian Tree Sparrow, Cape May Point. Up to nine races of this species are recognized in its native range, with a general trend for birds to become subtly darker and more heavily marked towards the east. However, the trend is clinal and not all races are widely accepted. There is much individual variation within populations, making the identification of individuals of unknown origin rather difficult; however, this bird certainly conforms with the appearance of birds in the North American population [photos by Mike Crewe].
Posted by Mike Crewe at 3:41 PM