Preparing for Fall (and expecting the unexpected again)

After a relatively wet first half to the year, these past few weeks have been stiflingly hot and dry, which is really not good for the environment. Cape May has a water shortage approaching crisis level, and yet local townships allow those that so choose to throw water on their manicured lawns as though it were an infinite commodity. Thankfully, some of us are gardening for wildlife and thinking about future generations and, though our own property is looking a little sorry for itself we have not, yet, once had the hose pipe out this year.

The shortage of rain is showing itself in our local wetlands too, with the ponds at the The Meadows, for example, reduced to a narrow channel running through the middle of the site. But this is not all bad, as there is good feeding habitat here for migrant shorebirds - and the shorebird show is certainly now under way. Least, Pectoral, Stilt, White-rumped, Spotted and Semipalmated Sandpipers, Greater and Lesser Yellowlegs, Short-billed Dowitchers and more are all enjoying a good feed before continuing their southward journeys. At the moment, we are at prime time for returning adults, but the first few juveniles - in their spangly, pristine plumages - are now arriving too, and this is a great time to be in Cape May and checking out those 'confusing little brown jobs'...

While there is plenty of good birding to be had right now - terns on the beaches were perfect for our terns workshop yesterday and shorebirds are lining up for our suite of shorebird workshops coming up (check out our online calendar for details of these and other workshops) - it will continue to get better and better as the season progresses. Recently, a small band of us got together and did the annual tidy-up at Higbee Beach, in preparation for the start of our fall research season. August 16th will see Glen Davis climb the dike around dawn and check off the first flight call of a northbound migrant that will mark the official start to the season. Of course, migrant songbirds are already coming through even now and Yellow Warblers, Black-and-white Warblers, American Redstarts, Indigo Buntings and both Northern and Louisiana Waterthrushes have been noticeable lately.

That's the preparation dealt with, so what of the unexpected in the title? As ever, nature is producing its surprises for us and intrigue this season has started with a phenomenal and probably unprecedented northward movement of White Ibises. While small numbers of White Ibis are almost to be expected at the end of the breeding season, as birds spread out from southerly breeding grounds, numbers in recent years have been showing a steady increase. Single-figure counts are now expected, and even gatherings of up to 100 birds have been known to occur at least as far north as Delaware. But the estimate of 1,700 White Ibises reported from Chincoteague, Virginia on the Delmarva Peninsula caught everyone by surprise! While numbers in Cape May have so far been very modest in comparison, it's worth keeping an eye out for these birds at wetlands along our coast.

The stage is set, the ground is prepared, our seasonal staff will be here to greet you. Come on down to Cape May, the good times are already starting! 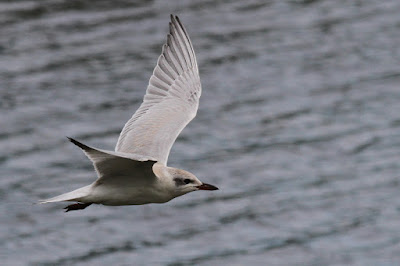 Perfectly-timed for our tern workshop, this juvenile Gull-billed Tern put on a great display for us as it snapped up dragonflies over the plover ponds. Gull-bills as young as this are not a regular sight in Cape May, so it was nice to get to grips with this distinctive bird, with its dove-gray wings, brown-speckled upperparts and distinct orangey tint to legs and bill [photo by Mike Crewe]. 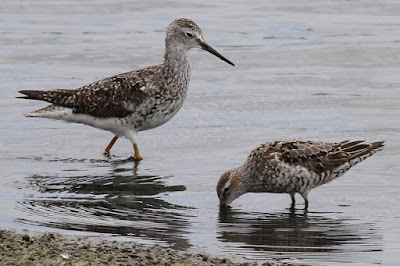 It's worth being out and about at wetlands during August to witness returning adult shorebirds. Such birds are generally darker and show more patchy plumage than the dapper juveniles that will come later. On the Lesser Yellowlegs and Stilt Sandpiper above, note the mix of black-centered, Alternate (breeding) plumage scapular and mantle feathers, and the pale gray, white-edged feathers of the incoming basic (non-breeding) plumage [photo by Mike Crewe]. 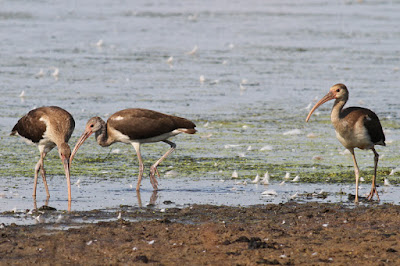 Keep an eye out for the unexpected over the coming weeks - these three juvenile White Ibises were on Bunker Pond for a short time on August 5th, but at least 1,700 are 'absent without leave' from Chincoteague and they have to be somewhere! [Photo by Mike Crewe] 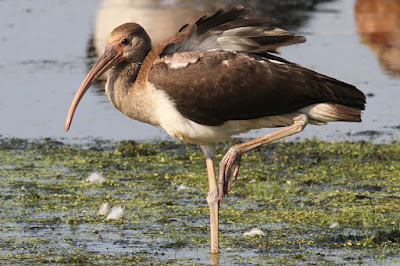 A White Ibis ponders the lack of white in its plumage... [photo by Mike Crewe]. 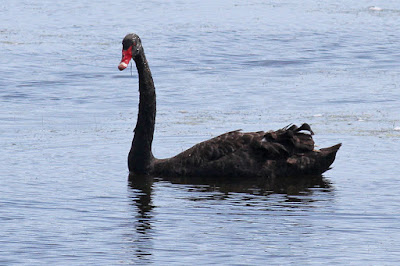 Expecting the unexpected doesn't always throw up pleasant surprises. Though Black Swans are unarguably graceful birds, the place for them is in Australia, not on Bunker Pond, adding to the eutrophication of the water already being caused by record-high (and still growing) numbers of non-native Mute Swans and introduced Canada Geese there. Our migratory birds desperately need good, well-managed habitat to rest and feed up in before continuing on their arduous journeys - providing such habitat at critical stop-over sites like Cape May seems to be the very least we can do for them [photo by Mike Crewe]. 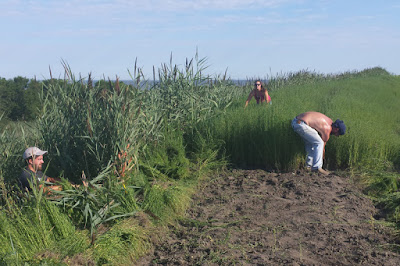 Getting prepared - our brave die-hards risk life and limb tackling invasive aliens to ensure that Higbee Beach is ready and waiting for the birds that will surely be arriving soon. Preparing the ground will ensure we can continue with long-term migration studies using thorough protocols that will provide us with the right answers when questions about the environment need to be asked [Photo by Mike Crewe].
Posted by Mike Crewe at 2:54 PM