I got my lifer Connecticut Warbler from the Morning Flight Songbird Count back in the fall of 2011. Yes, I saw it flying high overhead the "Higbee Dike", or more accurately, someone called it out and I got on a large bodied, yellow-bellied, gray/brown-headed warbler flying overhead and away. As you can imagine, it left me wanting a better view. Connecticut Warbler had been my nemesis bird for many years, but I consistently justified it each year by saying "yeah, but they're hard hard to see, they're skulkers, they're notoriously shy (except when they're not) and they come through Cape May during a small window of time each fall". The reality, of course, is that Connecticut Warblers are actually quite common during their migration window, and the habitat on Cape Island is quite good for them such that with some understanding of where and how to look, and an eye on the date, you don't have to wait a lifetime to see this highly prized wood warbler, and you don't have to see it as a fleeting glimpse from atop the Higbee Dike (although that too is a thrill of its own!).

We at New Jersey Audubon's Cape May Bird Observatory, with the help of a dedicated volunteer, have recently completed development of a research database for all of our migration count data (the Cape May Hawkwatch, Avalon Seawatch and Morning Flight Songbird Count...the Monarch Monitoring Project is next!). This will allow us to analyze and to collaborate on analyses of our datasets to better understand bird populations and inform our conservation priorities. As I was preparing for a talk to deliver in Sweden in early September, I ran analyses on several species of concern for which we have data in our database. I also considered the fact that birders from Europe are interested in seeing our North American Wood Warblers, and Connecticut is at the top of many lists due to their secretive nature. When I crunched the numbers on CONW (the 4-letter alpha code that bird banders use for Connecticut Warbler) I was impressed with how well the data described the small window of time where CONW peak in Cape May. 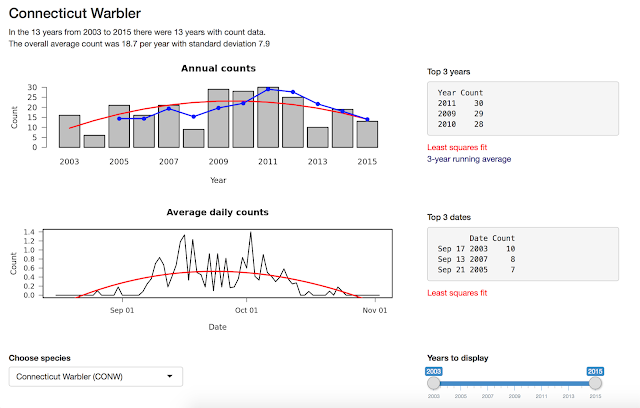 While the bulk of CONW pass through Cape May during the latter two weeks of September and the first week of October, the top three high count dates occurred on September 13, 17, and 21 in three separate years. The top three years for CONW were 2009, 2010, and 2011, over which two different counters counted (so not the effect of a single hotshot counter). So if you were looking to maximize your chances of seeing a Connecticut Warbler during fall migration, a good bet would be to aim for  the latter half of September, especially during the 13th - 21st timeframe.

Looking at this year, we didn't see CONW numbers start to materialize until this past week with a few earlier records on the 8th and 12th of September, while most came in after the 21st. So far this year eight individuals have been tallied from the Morning Flight Songbird Count with a daily maximum of two. While it's not shaping up to be a record CONW year, there have been several cooperative birds around Cape Island posing long enough for folks to get a look, and even some photos.

On Cape Island Connecticut Warbler like ragweed (Ambrosia sp.) and the fields at the Higbee Beach Wildlife Management Area are full of it! These little skulkers also like a variety of field plants in the aster family, so diverse fields including ragweed and things like goldenrod (Solidago sp.) are places where you can strike CONW gold during peak migration. Of course these birds are skulkers, preferring to walk away from you rather than fly, so patience is key. These birds are actively migrating, so like other actively migrating warblers they are seeking out food and shelter during the day. Early mornings after a night of northerly winds at Higbee can be productive as birds tend to be settling in after a nocturnal flight. They're hungry, and searching for where they will spend their day, and therefore tend to be more visible. As you walk the fields, look for birds flushing short distances from you.

Common Yellowthroat is also common throughout the Higbee fields, but with a little scrutiny can be quickly discounted. CONW is larger overall, larger bill, chunkier-bodied and rounder-bellied, with complete yellow underparts, and has a distinctive full eye-ring with a light brown (but contrasting) hood in young birds, and gray hood in adults. Young and adult female Common Yellowthroat in contrast have yellow primarily in the under tail coverts and throat, with a white belly and dingy olive chest, and a broken eye-ring.


Nashville Warbler is less common but definitely present and also noticeably smaller and more "flitty" than Connecticut Warbler. They do have a complete eye-ring and gray head, but show a yellow throat and breast (not a hood as in CONW) and show extensive white around the legs and belly contrasting with yellow undertail coverts and throat. Nashville Warbler also commonly feed at the tops of Goldenrod and other seed-bearing field plants with apparent disregard for birders, something very atypical of CONW.

Good luck on your search!

Now that you're equipped with the skills you need, I hope you head out and find some Connecticut Warblers! If you find yourself in Cape May, please stop by the Northwood Center and we can fill you in on what's been seen most recently, including any known sightings of Connecticut Warbler, and of course we'd love to hear your stories if you've been successful, either in person or in the comments of this post.

For full details on what's going on in Cape May, download our quarterly program guide, the Kestrel Express, here.