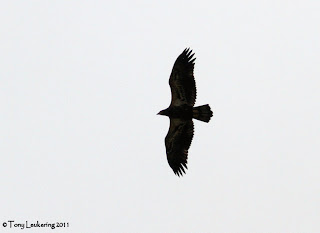 ... well, lots of things: awesome, incredible, fascinating, one-of-a-kind. That point was driven home to me, if it hadn't already been, by seeing a particular Bald Eagle over Stevens St. in West Cape May this afternoon. Here in Cape May, we like to spout that there's rarely a time in the year that something isn't migrating through the peninsula when, in actuality, we don't even have to rely on the broad spectrum of taxa that violate local air space on their way between points A and B. To prove the point, all we really have to know is Bald Eagles.

In Cape May, virtually any westerly or northerly wind -- particularly northwest -- brings raptors. It doesn't matter if it's October, February, April, or July; here, NW equals raptors. One of the species that is seen at the very beginning of hawk-count season in the fall here is Bald Eagle, as the last of the youngster Florida eagles pass through heading north cross paths with the first of the older Florida eagles on their way south for the breeding season. Somewhere near the beginning of the fall hawk count, young northern Bald Eagles start showing up on their way south and the rest of the season probably sees a mix of southbound northern and southern Bald Eagles. The last southbound birds, probably immature southern birds and adult northern birds, pass through in January.

Shortly after the southward migration ceases, north-bound birds start appearing. This year, sometime in early February, I started doing a bit of hawkwatching at various Cape May sites, but particularly at the east end of Stevens St. in West Cape May. From the get-go, I noted Bald Eagles coming from across the bay and past me heading north. I wonder how many a spring hawk count would tally here.

Yesterday, along with others, I counted raptors passing over Stevens St. from 11:30 am to 2:15 pm, recording 12 species of raptor, including that wonderful Swallow-tailed Kite and all three expected falcon species. The flight was dominated by Cooper's (17), Broad-winged (9), and Red-tailed (12) hawks. Nearly all of the Cooper's and Red-taileds were juveniles -- last year's young -- while there was a mix of ages of Broad-winged Hawks, which is to be expected, as the species' local migration timing is considerably later than that of Coop and Red-tail. In that flight were two immature Bald Eagles, both obviously heading north. The wind was southwesterly.

In today's northerly winds, many of those same observers conducted the informal hawk watch from about 10 am to 12:30 pm, seeing roughly equivalent numbers of birds, but of fewer species; no kites or falcons this time. However, we tallied 7 migrant eagles, 1 adult and 6 young birds. For most of the spring -- counting early February as spring for Bald Eagles -- all of the juveniles were obviously worn and, in recent weeks, most of them had initiated their prebasic molt -- many were missing at least one innermost primary on each wing. These are birds that are around one year old produced from northern nests.

At 12:21 pm, when most of us were starting to pack up to look into other birding options, everything changed. The last counted Bald Eagle of the day (pictured above) came in from the south right over our heads and prompted this essay. That is because this bird is obviously in fresh juvenal plumage -- no molt, no wear, and all secondaries nicely pointed. Local juvenile Bald Eagles are still wearing downy white and adult Bald Eagles in the very far north may still be sitting on eggs. Thus, this bird probably became independent of its parents just this month and is the vanguard of the hordes of Florida-produced Bald Eagles that will be moving through Cape May and other eastern localities for the next few months.

So, as you can see, there is rarely a time that at least one Bald Eagle is not moving through Cape May heading in one direction or another.
Posted by Tony Leukering at 9:19 PM