With an afternoon free, I headed down to Cape Island in hopes of the FOY Broad-winged Hawk in the NW winds. That was not to be, but the low-density, but steady flight of American Kestrels heading west around the Cape was enjoyable. A very quick visit to the Cape May Migratory Bird Sanctuary (on the West path only) produced a FOY Bank Swallow, but nothing else of particular note. However, later in the day, Chris Vogel found an American Golden-Plover along the East path. I knew I should have walked the whole loop!

At the east end of Wilson St. in West Cape May, I ran across a strongly singing Prothonotary Warbler; a nice surprise and another FOY. In the northern wet woods at Villas WMA, a red bird caught my attention while I was trying to photograph Hermit Thrushes. I am glad I looked at it, as it wasn't the male Northern Cardinal that I was expecting, but an adult male Summer Tanager (FOY)! Also in the wet woods was a FOY Pearl Crescent and my personal FOY Prairie Warbler. 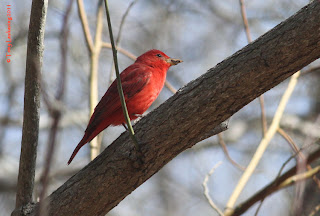 At the Bridge Pond, I saw FOY Fragile Forktails and my personal FOY Blue Corporal, though the latter I misidentified as Stripe-winged Baskettail as I didn't really look at it -- I just photographed it extensively. When Mike Crewe showed up to look at my good find, I realized that I had seen, but not really noticed, the typical corporal bars (see below). Ah, well. 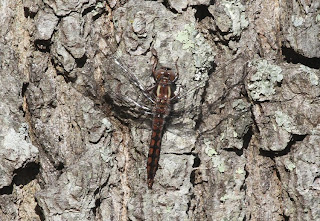 North of the Bridge Pond, I ran across a nice mixed flock of birds, with the below strongly-singing Eastern Bluebird (perched on last year's Common Mullein stalk) and the two remaining regular 'P' warblers for New Jersey: Pine Warbler and Palm Warbler (the Palms were all Yellow Palms as expected this early in the season). So, I managed all four NJ 'P' warblers (warbler species whose names begin with 'P') despite only running across four species of warblers all day! 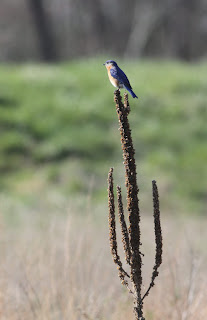