There's a great big dike somewhere north of Cape May and its job is to hold back all those birds that breed up there, until the time is right. A growing swell and restlessness builds behind it until finally, one day, when the weather and number of birds and so many other things conspire against the dike, the whole lot bursts and we get swamped with avian delights. Well, the past few days has seen a crack in that dike; a little chink in the concrete wall that has allowed a few birds to tumble out and head south.

On our Wednesday walk yesterday morning - my chance to sneak out into the field - there was certainly a whiff of migration in the air. A waterthrush of uncertain species flew a couple of circuits high over the state park parking lot before heading back north, little groups of Glossy Ibises, egrets and shorebirds circled the point and steady parties of Red-winged Blackbirds and Brown-headed Cowbirds ran the dune line. I just heard there is a Black Tern currently on Bunker Pond, while highlights for others included 42 Whimbrel passing the point on Sunday, a remarkably early (though not a record-breaker) female Cape May Warbler seen by Tony Leukering along Stevens Street on Monday, a Cerulean Warbler in Brian and Karen Johnson's garden at Eldora and a male Ruddy Duck which turned up on Lake Lily on 17th and still seems to be present. Tony Leukering reported a juvenile Ring-billed Gull at the state park on Wednesday and a Bank Swallow there the same day is the first I have heard of locally this fall.

Brigantine has certainly been the place to be with apparently large numbers of shorebirds present, six Black-bellied Whistling-ducks on Sunday and various reports of a White-faced Ibis and two White Ibis over the past week or so.

Look who came to breakfast!
When you live in Cape May, even a brief walk into the garden before work can turn up surprises! Here's a couple of unexpected visitors from this week... 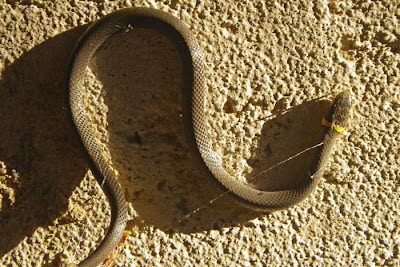 I found this Ringneck Snake (Diadophis punctatus) yesterday morning in our garage, caught up in a particularly sticky spider's web. This species is often split into Northern and Southern subspecies, but South Jersey lies in an overlap zone where many individuals are intermediate in appearance. This one seems to be a Northern with a complete neck collar and a poorly-marked belly pattern (which you can't see here). I unravelled the little chap and he pottered off into the leaf litter behind the house. 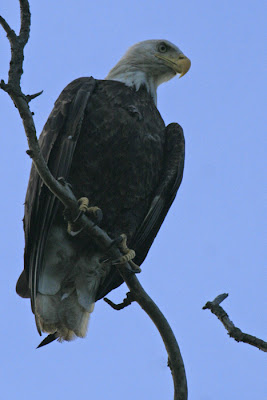 A much bigger surprise this morning came when I was out watering the plants and heard a Laughing Gull mobbing something overhead. I discovered this mighty adult Bald Eagle watching me from the top of our Siberian Elm, right beside the house!! No wonder my car needs a wash so regularly...
Posted by Mike Crewe at 12:18 PM