Even though migration is steadily getting into full-swing, it's still worth getting up into the backwoods every now and again once things quieten down after mid-morning - that is if you can handle the 90+F temperatures at the moment! Recently I've been checking out some new places, which sometimes proves to be a little disappointing, other times you chance across the totally unexpected. Cape May County is still blessed with a fair amount of wet woodland, though it's often hard to get away from the ATVs and trash dumpers, but now and again you can find yourself in a quiet haven, away from it all. Recently, a short walk brought me out onto a powerline cut and the sound of Woody Woodpecker caught my ear (I think it was the left one!). At the top of one of the powerline poles, there was a smart adult Red-headed Woodpecker, drumming as though on territory. And sure enough, he was - for he was shortly joined by his mate. And then the unexpected happened... 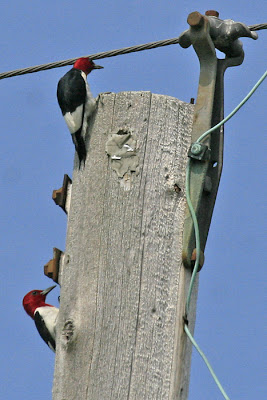 A pair of Red-headed Woodpeckers caught red-handed making holes in a power pole... 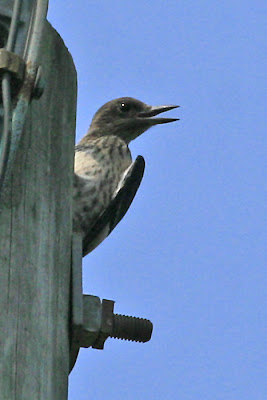 Even better - they were joined by two youngsters. Red-headed Woodpecker is a rare breeding species in Cape May County with just a handful of pairs known to be around, so this was a nice find. 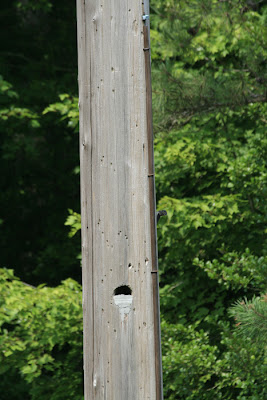 To complete the set, here's the other youngster. Can't see him over there on the right? 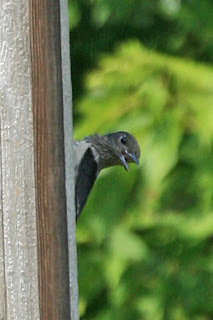 OK, here he is!! Note that young Red-headed Woodpeckers have gray heads. I'll be hoping to see these guys heading south through Higbee's Beach in a month's time.
As well as checking on local breeding birds, late July can be a good time for the Platanthera orchids. This is a group of often very showy species, most of which are in serious decline due to loss of habitat and probably a number of other factors. For this reason, locations of plants are usually not revealed, but they can be found if you look for them. However, if you are out looking for such rare plants, please do remember that non-flowering individuals are easily missed and great care should be taken not to trample vegetation. 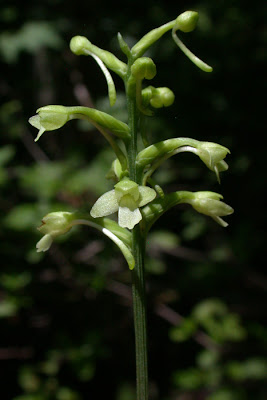 Perhaps the commonest but least showy of our local Platantheras is the Small Green Wood Orchid (P. clavellata) which is fairly widespread in wet woods but easily overlooked in the shadows. 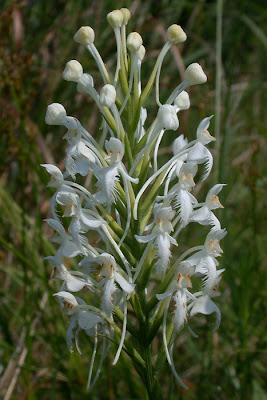 Also common and far more showy is the White Fringed Orchid (P. blephariglottis), a big, chunky species that is hard to miss. It's widespread in boggy clearings and not too hard to find. 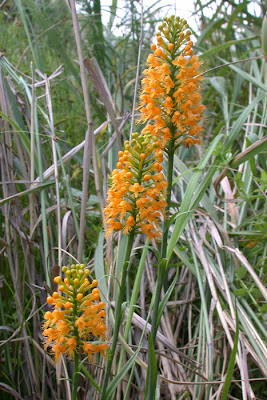 More spectacular yet are the brilliant orange spikes of Crested Fringed Orchid (P. cristata); this is much rarer and not at all easy to find now, but one or two sites still hold reasonable numbers of plants. 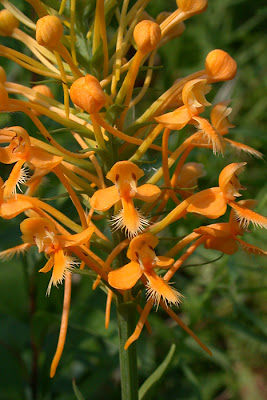 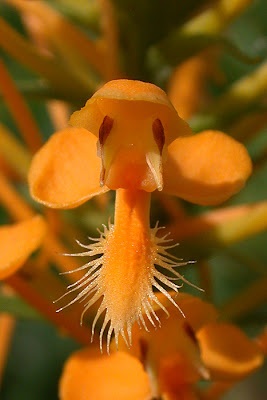 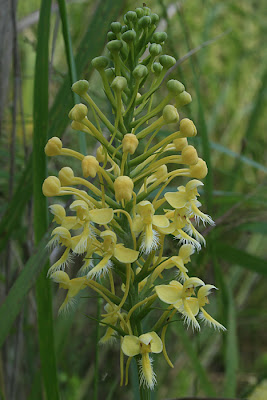 The presence of Luer's Fringed Orchid (P. x lueri) is another potential threat to Yellow Fringed Orchids. This is actually a hybrid between Yellow Fringed and White Fringed Orchids, as can perhaps be deduced by its pale yellow flowers with white trim. It is possible that subtle habitat changes are allowing the more common White Fringed Orchid to spread and come into contact with the rarer Yellow Fringed Orchid and the two are then cross-pollinated by insects. Many orchid species still appear to be in a high state of flux and hybridization between many species is commonplace, suggesting that species limits are still evolving and not entirely clear yet.
Posted by Mike Crewe at 11:31 AM