Those rather tricky, rather 'samey' little brown birds that are oh, so confusing to beginners are well known as 'Little Brown Jobs', but the term could be applied to the highlights of the Cape May Butterfly Survey this year too. Rather annoyingly, after weeks of glorious sunshine and soaring temperatures, the weather decided it was time for a change and drab skies and cooler weather no doubt played a part in keeping our count numbers down. But we all persevered! This annual survey follows similar lines to the well known Christmas Bird Counts; the area is split up into manageable chunks and teams of observers go out and count what they can find. Covering the Lower Township area from the Cape May canal north to Rio Grande, Tony Leukering, Glen Davies and I had a fun time, despite the dull weather (which even dropped some spots of rain on us) and found a good range of butterfly species. Typically in dull conditions, it's the darker species that are more active as they can soak up the sun more readily than paler species and this indeed proved to be the case, with the skippers - the epitome of little brown jobs - being relatively numerous and second only to the abundant Red-banded Hairstreaks that crowded the Sweet Pepperbush flowers. Here's a few photo highlights from our afternoon. 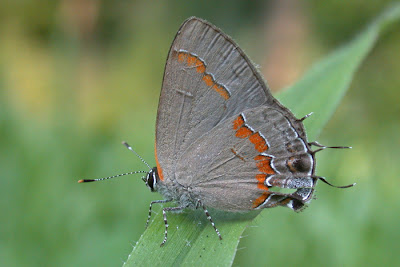 Red-banded Hairstreak is a plentiful - though easily-overlooked - species in Cape May County. 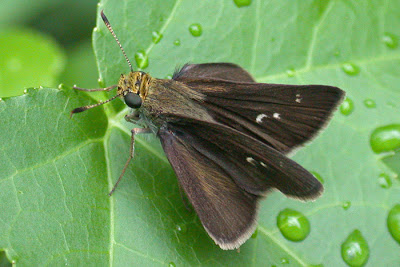 Dun Skipper - another easily-overlooked species as it lurks low in long grass a lot of the time. This is a male with a distinctive, ochre-colored head. 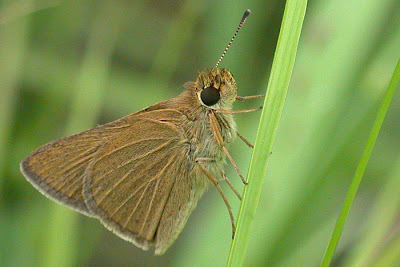 Swarthy Skipper - another long-grass lurker, this time with a butterscotch underside and pale veins. 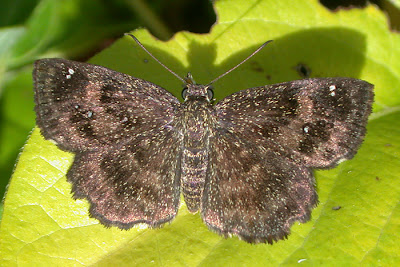 One we missed on the survey but which I spotted in the garden this evening, Hayhurst's Scallopwing - probably one of the best butterfly names of all! Note the shadow - the sun was back again this evening! 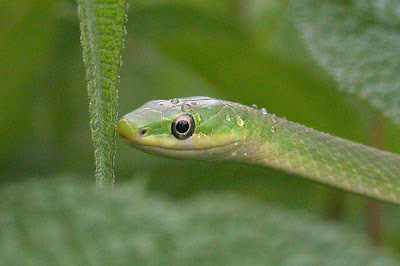 And the great thing about taking part in surveys is that it gets you out into the field - which means you never quite know what you are going to find. This Rough Green Snake was a real bonus as it climbed through a large stand of Joe-Pye-weed and Common Boneset. [All photos by Mike Crewe]
Around Cape May Point, Fall migration grows a-pace. Michael O'Brien's terns workshop started well today with both Black and Sandwich Terns and six Lesser Black-backed Gulls on the beach, with the bonus of a fly-by Brown Pelican. No sooner had Karl Lukens reported that a Eurasian Collared Dove was still present on Lincoln Avenue than news came through that two were present - is this rapidly-expanding species finally going to settle at Cape May?

The wet weather overnight maybe stalled a few things, but Northern Waterthrushes and Yellow Warblers are leading a slow but steadily-growing vanguard of songbirds heading through the point now - the weekend looms and Higbee's beckons!
Posted by Mike Crewe at 7:45 PM