Things seem pretty much back to normal at Cape May today, though I am sure that there are still odd birds re-positioning after the hurricane that have yet to be found. First things first, Cape May Point State Park is open; the staff have done a good job cleaning the trails out of debris and it all looks good again. I had a quick look this morning and the beaches are remarkably intact, with evidence of overtopping by the sea but no damage. The ponds are at winter height (!) so there's little or no marginal habitat for shorebirds at the moment, but Derk Visser reported an American Bittern at Bunker Pond this morning and Black Terns continue both there ans at Lake Lily. The male Ruddy Duck continues on Lake Lily too - he first turned up somewhere around July 17th if I remember rightly, but hasn't had much of a mention on the blog here.

Both Cape May Point and Higbee's Beach had good flights of commoner bird species this morning and Michael O'Brien found two Sandwich Terns and confirmed three Eurasian Collared Doves still alive and well in the area. There's been a massive clear out of terns in general, but a good selection of species can still be seen on the beaches around the point. At the Northwood Center, I seem to add a new bird to the day list every time I look out of my office window, so there's certainly a nice trickle of birds going on. Most recently, Yellow-billed Cuckoo, Black-throated Blue Warbler and Swainson's Thrush were out there, the latter just on the early end of migration here.

At the coastguard base, Chris Hajduk reports one or two Brown Pelicans on the Poverty Beach pilings and the local pair of Peregrines still using the water tower from time to time.

Finally, please be aware of possible traffic congestion locally as people return after the passing of Irene, and please stay cool, have fun - and tell us if you find something good!! 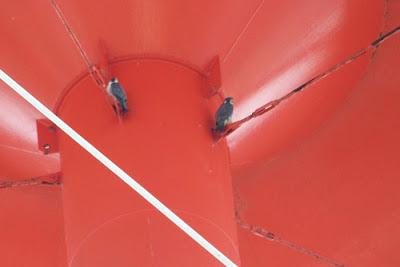