Flying fish and the magical platform

[All pictures are copyright 2011 by Tony Leukering. Click on image(s) to see larger version(s).]

With the prediction of NW winds all day in Cape May, I headed my car to the point to see if Dave Hedeen's prediction of a count of 13 American Kestrels moving by the Hawkwatch Platform in Cape May Point S.P. would prove out. I arrived at 9:30 and spent two hours watching the tern show there (more on that in a bit) before Dave and Meg showed up a bit after 11:30. By that time, I'd "counted" one Broad-winged Hawk and noted one juvenile Cooper's Hawk, one Osprey, and one distant adult Red-tailed Hawk not moving, so I didn't "count" them. Then the dam... well... it started leaking. A bit after noon, we had two female American Kestrel go by and by the end of the day (I quit at 5 pm), I had tallied 10 American Kestrels. Ah, well Dave, you were a bit off. But, the raptor total for the day was 16 migrating birds, with two each of Cooper's Hawk, Broad-winged Hawk, and Merlin. Not too shabby for 22 August! 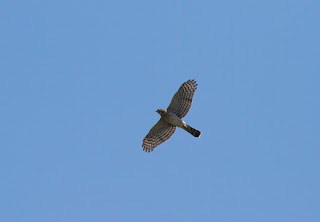 [This Cooper's Hawk was one of two juveniles that were "counted" today from the Hawkwatch Platform.]

The fall count season started, though the Hawkwatch has not, when Tom Johnson climbed the dike at Higbees Beach SWA before sunrise on 16 August to initiate the Morning Flight count for the fall, which will continue to 31 October. In a bit over a week, Melissa Roach will arrive in preparation to conduct the hawk count once again, starting on 1 September, with the count continuing through 30 November. Also at that time, Tom Magarian will start his efforts as the Swing Counter, filling in for the three primary counters on their days off. Finally, on 22 September, Tom Reed will get the Seawatch going, which will end on 22 December.

So, back to the subject of this essay. The platform, as I've written before in this venue, is a magical place. Its large sky, variety of nearby habitats -- particularly the adjacent coast and Bunker Pond, and elevated viewing make this site hard to beat for racking up ABA-area bird variety while sitting on one's bum! Today, the magic was provided primarily by terns, with an uncountable number of six species coming and going throughout the day. Particularly interesting were the Black Terns, which are putting on a good show in many areas of lower Cape May County. Though I never saw more than five at once today, Black Terns were dropping in and departing regularly, particularly in the middle and late afternoon, and I would hazard that 75+ popped in over the course of my 8.5-hour tenure there. 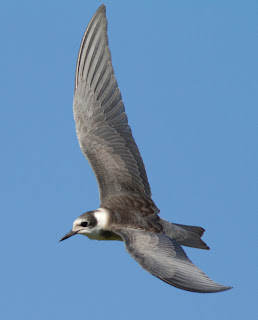 [This juvenile Black Tern was one of many flying by the Hawkwatch Platform today, after toodling around over Bunker Pond. It is readily aged as a juvenile by noting the slight wash of brown on the face, the brown in the lesser primary coverts, and -- particularly -- the extensive brown on the back.]

Bunker Pond's lowish water levels are providing for loafing areas and a great place to study the variety of ages and plumages of both Common and Forster's terns. One (or more) Royal Tern made several appearances, as did one (or more) Least Tern. Finally, an adult Caspian Tern with one kid in tow was present most of the day, with a second adult being seen once in the afternoon. The adult, in addition to giving its youngster fishing lessons, was also, apparently, attempting to give at least one fish flying lessons. 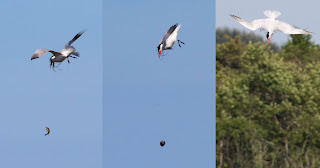 [This adult Caspian Tern caught a fish in apparently very weedy water in Bunker Pond and, while apparently trying to maneuver the fish and all those weeds in its bill, let it slip. As can be seen in this composite of three images, it chased after it, exhorting it to flap its wings and stay aloft, but to no avail, with the fish hitting the water and neither the tern nor a nearby Laughing Gull being able to save it from that horrid fate.

In related news, Chris Vogel noted 1000s of terns on the beach at Cape May Point early this morning and others noted one Sandwich Tern and a leucistic Laughing Gull there. Chris also saw two Parasitic Jaegers (an adult and a younger bird) close to shore. Tom Johnson and others had their slow day on the Higbees Beach dike enlivened by a close Cerulean Warbler. Michael O'Brien reported large numbers of Laughing Gulls and terns -- including two Sandwich Terns -- moving by the South Cape May Meadows in the evening and, a bit early, the first Yellow-rumped (Myrtle) Warbler of the fall. On the subject of warblers, Bernie Master noted a Brewster's Warbler (the dominant form in the hybridization of Blue-winged and Golden-winged warblers) at Higbees Beach SWA.

The adult female Brown Booby continues to delight observers, whether they are standing at Two-Mile Landing or taking a two-hour cruise of the back bays on Bob Lubberman's Osprey. Though it is readily seen from shore, the views provided aboard are incredible!