Western Grebe and other news

Scott Whittle found a Western Grebe on the bay just off Sunset beach this morning; it seems likely that this bird wintered somewhere in the area and is now reorienting itself. It may even be the bird that that spent the end of last year in Cape May Harbor. An adult Parasitic Jaeger was also present briefly at the same site. It looks like we are in for some showers on Monday and Tuesday so make the best of the sunny weather to scan the Cape May skies for a kite or two - we must be due for a Mississippi Kite around now!

Elsewhere, a gentle trickle of warblers continues to filter through our area. Our Beanery walk had a nice singing Prothonotary Warbler this morning and I heard of an American Redstart at Mays Landing (one was also at Higbee Beach on 25th). If you are really keen on getting a good list up tomorrow, Karen Johnson tells me that her tour of the Belleplain/Peaslee area this morning turned up 17 species of warbler, four species of vireo and both Summer and Scarlet Tanagers, while two Ruby-throated Hummingbirds, Indigo Bunting and Rose-breasted Grosbeak have all been at her feeders - what a morning! This morning saw a nice steady movement of small parties of egrets and Double-crested Cormorants passing through, Forster's Terns are returning to the Bunker Pond railing and several reports of Red-headed Woodpeckers have come from The Beanery, Cape May Point and Cox Hall Creek WMA. Recent reports of shorebirds continue to be headed by a Wilson's Phalarope which was still present at Heislerville today. One or two Blue Grosbeaks are popping up in scrubby fields around Cape May and a good scattering of Blue-headed Vireos continues to be reported. Cape May Point State Park continues to provide a good swallow show along the dune edge with at least four Cliff Swallows among the Barn, Bank, Tree and Northern Rough-winged Swallows there yesterday and a single Cave Swallow this morning (the latter presumably the continuing bird that has been around on and off for a few days now). 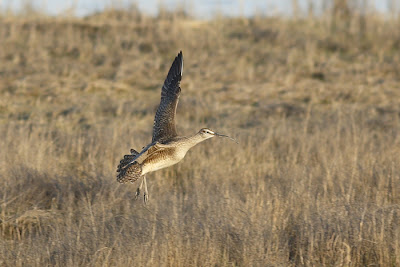 Whimbrels are starting to appear in our back bay marshes now - keep an eye out for the around Nummy's Island, Shellbay Landing and other saltmarsh areas [photo by E J Nistico] 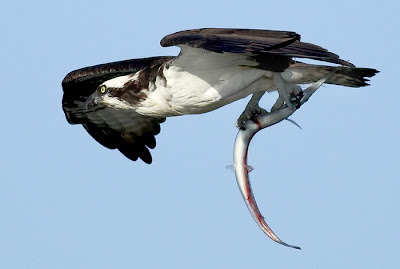 It's amazing what Ospreys will pull out of the water for lunch! This one caught a nice-sized Atlantic Needlefish near Nummy's Island [photo by E J Nistico]. 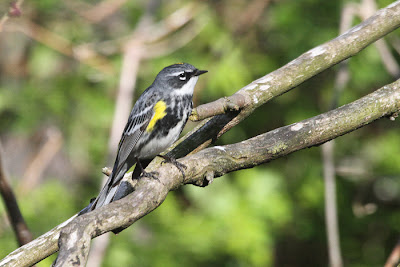 Yellow-rumped Warblers are back in our area and many are looking very smart in their breeding plumage now [photo by Mike Crewe]. 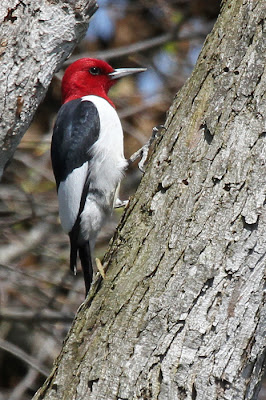 Keep an eye out for Red-headed Woodpeckers as a small passage of these birds is taking place through our area right now. This bird was one of two at the Northwood Center yesterday [photo by Mike Crewe].
Posted by Mike Crewe at 5:42 PM