What's happening at your feeders...

I have had some photos kicking around for a few weeks that I wanted to post here but somehow something else always seemed to turn up and take priority, so I'll squeeze them in here before the spring season really gets crazy. One of the first signs of spring that I notice is when the male American Goldfinches start to turn up back at the Northwood Center feeders; you look at them and you think to yourself, well you really look appalling! So why is that? Why do male American Goldfinches look so slovenly while all the other birds look relatively smart? The answer comes in their pre-breeding molt and how it compares with the molt strategies of other species.

Birds have a problem that is more or less unique to them and it stems from having feathers. Feathers are light but can be relatively strong and supportive, allowing birds to develop the power of flight. But the down side of feathers is that they wear rather quickly compared with hairs, and certainly when compared to scales, such as are found on reptiles. To cope with this wear problem, birds molt regularly, dropping old feathers and replacing them with new ones. There are a number of different strategies for doing this but overall it all sounds pretty straightforward - drop your feathers when they are getting old and get a new set. The problem here though, is that molting is expensive in terms of energy - it takes a lot of the individual bird's resources to produce a whole batch of feathers, and doing so all in one go could be very costly for the bird. Molting feathers has also allowed birds to change their appearance - it allows for a breeding (= fancy and showy-offy) plumage and a non-breeding plumage (= less showy and making the bird harder for predators to spot). But to achieve this, the bird would need to molt its feathers twice a year.

So what to do? Well, there are a number of different ways that the various groups of birds get around molt issues, but the one common to most songbirds is to turn the fact that feathers wear into an advantage. Most songbirds have just one complete molt a year and this usually takes place toward the end of summer, after the breeding season. During this time the birds molt all or most of their feathers, replacing breeding plumage with non-breeding plumage (if these are the same, then you won't notice a difference of course). This is costly for the bird, but takes place at a time when there is a relatively high amount of food available. But now comes the clever bit; to avoid having two complete molts a year, with the second coming in late winter when there is a lot less food available, many bird species have a non-breeding plumage which consists of feathers with a breeding plumage pattern on them, but with the addition of duller tips to the feathers. So what happens is that the duller tips and edges of these feathers gradually wear away with the daily wear and tear of life, slowly revealing the full colors of breeding plumage hidden underneath. A few birds such as American Goldfinch don't adopt this strategy, but many other species do...

Backyard feeders give a golden opportunity to study birds close up so take a moment to look at your birds and consider what is going on with them throughout the year. Are you watching a species that has two complete molts like the American Goldfinch, or are watching a species that gradually acquires breeding plumage through wear? 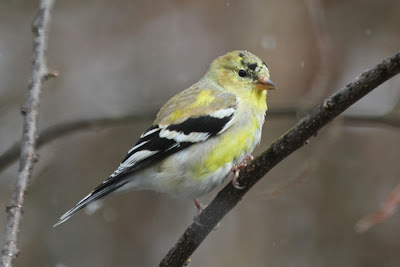 Male American Goldfinch at the Northwood Center feeders. Look carefully at the plumage and you will see irregular splotches of yellow on the back and belly and odd patches of black on the head. These are new, breeding-plumage feathers coming through among the older, less colorful, non-breeding feathers. This strategy produces a rather messy look for a while until the bird is done with the whole business of molting [photo by Mke Crewe]. 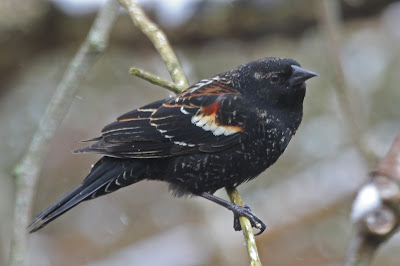 In contrast to the goldfinch, this first-winter male Red-winged Blackbird looks somewhat more regular in its markings. This is a classic sign of a bird that doesn't molt into breeding plumage but acquires it by wear. All those pale tips and edges will gradually wear off to reveal a smart, all-black breeding plumage (actually, in first-winter birds like this, some of these markings are more extensive than in adult birds and will remain through the first breeding season, but let's not get too technical at this stage) [photo by Mike Crewe]. 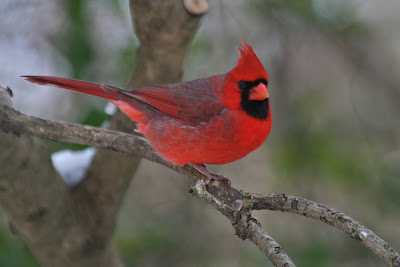 This picture is a bit soft, but hopefully you can see that the back looks grayer than the rest of the plumage on this male Northern Cardinal. This photo was taken in late December and shows the typical appearance of a male cardinal in mid-winter [photo by Mike Crewe]. 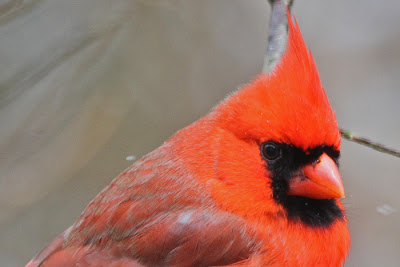 This picture was taken in late March and if you look closely at the back feathers, you will see that there is far more red than gray in them. The gray has gradually worn away and is reduced to narrow fringes, revealing the red bases to the feathers - breeding plumage without the stress of a molt [photo by Mike Crewe].

Recent Sightings
Our Wednesday morning walk at the state park revealed a nice build up to spring migration, with fabulous numbers of Northern Gannets pouring around the point, Black and Surf Scoters all over the place and skeins of Double-crested Cormorants passing overhead. A couple of Chimney Swifts, two Blue-gray Gnatcatchers and at least eight Eastern Willets were also noted. Karen Johnson reported both Ovenbird and Black-and-white Warbler at Belleplain today and she heard her first Whip-poor-will yesterday evening. 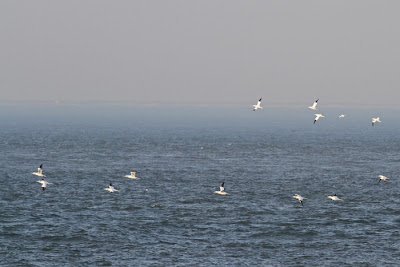 It's impossible to capture the scale of the Northern Gannet movement off the point this morning, but here's a few of them cruising out of the bay [photo by Mike Crewe]. 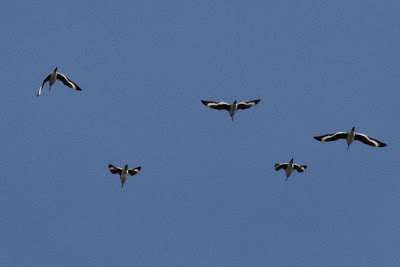 A big lens is sometimes needed to capture Willets as they pass high overhead. These five birds can be identified as returning Eastern Willets by the relatively small amount of white in the outer part of the wing bar [photo by Mike Crewe]. 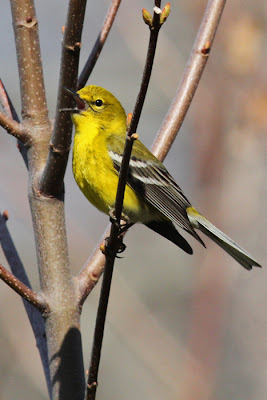 Always so happy when they first return! One of several bright, male Pine Warblers singing in the state park this morning [photo by Mike Crewe].
Posted by Mike Crewe at 11:11 PM