Out for the Count

Cape May's birdwatchers have been out counting birds this week, all in the name of research. Last Sunday saw many of the nation's birdwatchers taking part in the 115th annual Christmas Bird Count (CBC), organized by the National Audubon Society and, as ever, there were surprises in store on the Cape May count. These counts don't set out to produce a precise count of every last bird in the area - that would be nigh on impossible. Rather, the figures collected over time provide us with an idea of long term trends; an indication as to whether species are increasing or decreasing. In addition, because winter bird populations can move around from year to year, and because the counts take place across the whole continent, any local changes that might be detected can be put into context. In other words, a localized drop in numbers for one species may not mean that it is declining; the species may simply be wintering somewhere else.

Such long-term trends are helping to produce valuable data - data that is based on sound information, rather than guess work. One bird that has been intriguing in its behavior so far this winter is Bonaparte's Gull. Despite being a regular, even common, wintering bird around the coastline of Cape May County, not a single Bonaparte's Gull was logged on the Cape May CBC - a surprise to everyone. Is this a local trend or a wider phenomenon? It will be interesting to review the results of all the 2014 Christmas counts once they are in and compare them with those of previous years. It seems very unlikely that the species has suddenly drastically declined, so what is going on?

But CBCs can produce surprising guest appearances as well as noticeable absences and this year's Cape May count was no exception. Not all results are in yet, but by the last count, some 160 species had been reported within the 15-mile diameter circle that makes up the Cape May count. Among these were certainly a few surprises; Ross's Goose, Cackling Goose, Eurasian Wigeon, Osprey, Northern Goshawk, Northern Bobwhite, Western Kingbird, Blue-headed Vireo, Pine Warbler, Vesper Sparrow and American Tree Sparrow were all nice bonus birds, while the Black-capped Chickadee that turned up last winter made it onto this year's count, constituting the first modern count record of the species. Top prize went to Michael O'Brien, who found a Magnolia Warbler lurking in the back streets of West Cape May - the first time the species has been recorded on a Cape May CBC.

While the Cape May CBC is, of course, dear to our hearts, there was another reason to be out counting with great anticipation this week - this year's Avalon Seawatch was fast approaching the magical one million birds mark for the season. That wonderful milestone was reached on Monday, when Skye Haas and Tom Reed watched a female Black Scoter break the tape and become the millionth bird counted so far. There has been much celebration and Skye has posted a great report on the moment on our Seasonal Research blog. But the season is not over yet and you still have a few more days to enjoy the often impressive spectacle of birds heading south along the barrier islands. 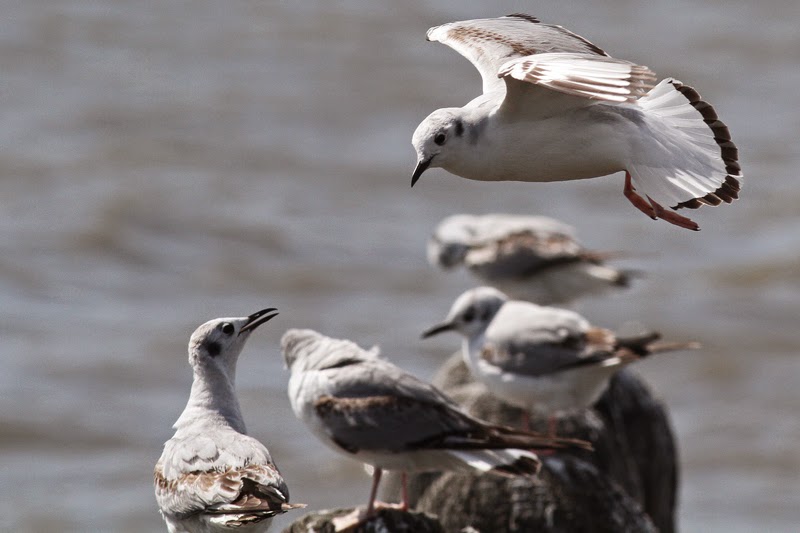 Bonaparte's Gulls have shown some interesting behavioral swings in 2014; while wintering birds have yet to appear at the back end of this year, birds in the early half of the year seemed reluctant to leave and first-year, non-breeding birds could still be found in South Jersey well into May. The above birds were photographed at East Point, Cumberland County and were part of a gathering of some 50 birds there on May 13th. Though no adults were present, even first-summer birds such as these would be expected to be north of our area well before this date [photo by Mike Crewe].
Posted by Mike Crewe at 11:45 PM