The run of great birding at Cape May that began way back in the fall and continued right through into winter by way of a spectacular Avalon Seawatch, finally paused for breath and Cape May Bird Observatory's staff had the chance to take a well-earned break. The holiday period at the back end of the year gives all of us a time to take a breather, catch up on things, visit friends and family and reflect on the year. Hmmm, seems there's a lot going on so maybe it's not so much a break as a change of direction for a while, but a change is as good as a rest as they say. My 'change' this year came in the form of an opportunity to spend Christmas in Costa Rica, something that was certainly a change from the norm. Though images of reindeers, Santa and even penguins were there to be seen, the warmer climate and ever-present coffee plantations and banana trees certainly made for a different bird list on Christmas Day - but there was nevertheless a distinct connection with Cape May.

If you have ever wondered where all those migrants that pass through Cape May in the fall are headed, then Costa Rica is a great place to start looking, for a good cross section of North America's Neotropic migrants can be found wintering there, especially wood-warblers. Seeing such birds on their breeding grounds in the northern USA or Canada, or even witnessing them flitting through the trees at the Northwood Center is, of course, only a part of their life histories. Though we may think of these birds as 'ours' because they originate from eggs laid in nests on our continent, we really should think of these as tropical birds; tropical birds that have worked out a successful breeding strategy, whereby they head north to breed in under-utilized habitats, then head back south again once the colder weather starts to close in and their insect food gets too hard to find.

Seeing such birds working through the tropical forest canopy in mixed flocks is to understand the other part of their lives. Chestnut-sided Warblers and American Redstarts pirouette through the trees in the same way that they do back home, but seeing Blackburnian and Golden-winged Warblers scooping up flies around Cecropia fruits is quite unexpected. Even more unexpected for me was watching a Mourning Warbler, bold as brass, bathing in a bird bath at our lodge and - even more startling - watching Tennessee Warblers feed on bananas at the bird table!! 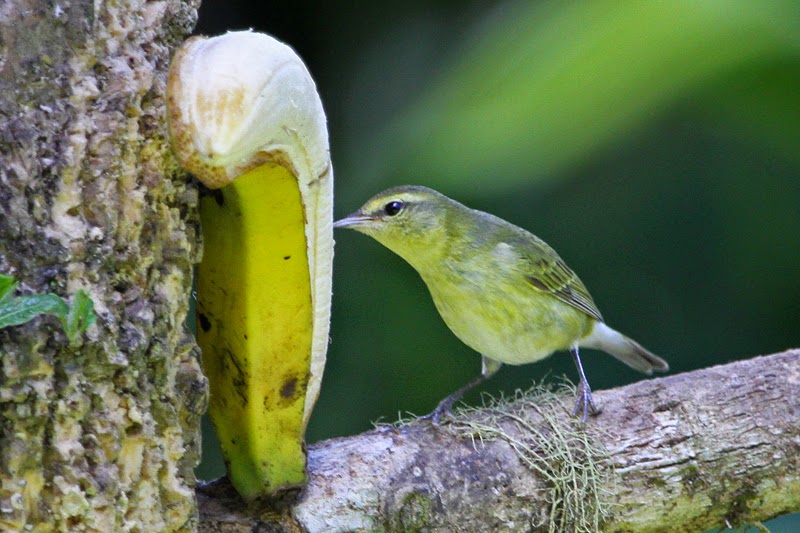 Migratory birds live nothing if not interesting lives - it certainly came as a surprise to me to see Tennessee Warblers eating bananas in Costa Rica! [Photo by Mike Crewe] 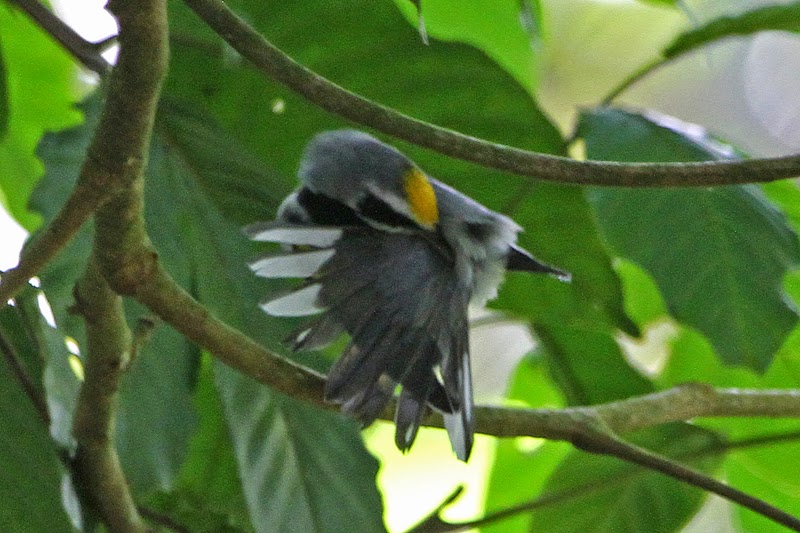 As Golden-winged Warbler populations continue to decline, strong initiatives are needed to determine what is going on and to make robust conservation decisions based on that information. Good numbers of Golden-winged Warblers (like this one, preening after a bath) winter in Costa Rica and much work is still needed to determine how best to help them. Buying wildlife-friendly, shade-grown coffee is a good first step in the right direction [photo by Mike Crewe].

Back to Cape May and the start of another year... CMBO's traditional 'Kick Off Your Year List' walk was a very different affair to last year's when we had a crazy number of unexpected birds waiting to be enjoyed on New Year's Day. That, of course, is the beauty of living in a temperate climate; we might complain about the cold, but having four seasons per year certainly offers up much opportunity for the weather to produce some interesting bird movements and every year is very different from the last. While lounging in the Tropics might seem like fun for a while, after a time one can get bored with laying bets on how long the rain will last today - give me the amazing variety of a northern temperate weather system any day!!

New Year 2015 was chilly but sunny at Cape May and a morning walk around the state park and along the streets of Cape May Point turned up a good selection of birds. An adult and two first-winter Tundra Swans continue on Bunker Pond, where busy parties of a wide range of ducks are now displaying their full-on courtship plumages. The sunny weather seemed to bring the raptors out in good number and we notched up seven species, including an adult Bald Eagle, and an adult Cooper's Hawk that seemed determined to catch a duck on Bunker Pond - though seemed to be failing miserably! Milder weather this winter meant that Golden-crowned Kinglets were easy to find around the point, as well as a Brown Creeper and Yellow-rumped Warbler, while we were also able to confirm the continued existence of at least one Eurasian Collared Dove on Yale Avenue.

A Black-headed Gull reported from the bayshore off the west end of Avalon Road eluded us, but checking the beaches there did reveal parties of Black and Surf Scoters, Red-breasted Mergansers and an array of gulls. The ferry terminal and canal inlet is always a good place to check in the winter too, and Purple Sandpipers and Ruddy Turnstones were busy on the stone jetties. If you are visiting Cape May Point, keep an eye out for the group of four Common Eiders that have been loafing around the jetties there of late; on January 1st, we found them between St Mary's and Coral Avenue.

The birding year begins again - Happy New Year and let's hope its a fun and bird-filled one! 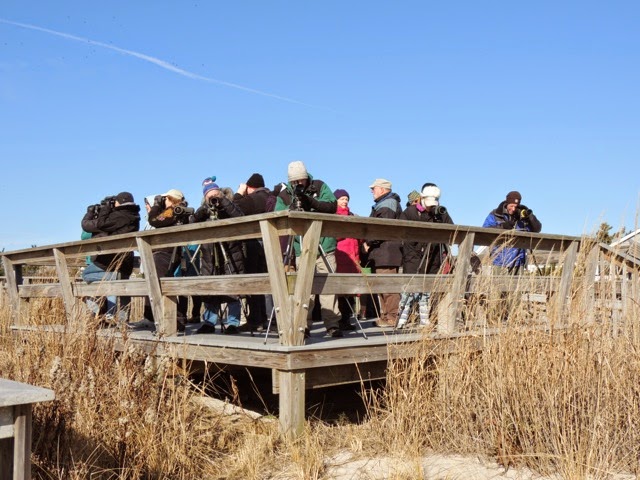 It may have been sunny on January 1st, but hats and gloves were needed to keep out a keen wind - our group scans the shoreline for Common Eiders [photo by Megan Crewe]. 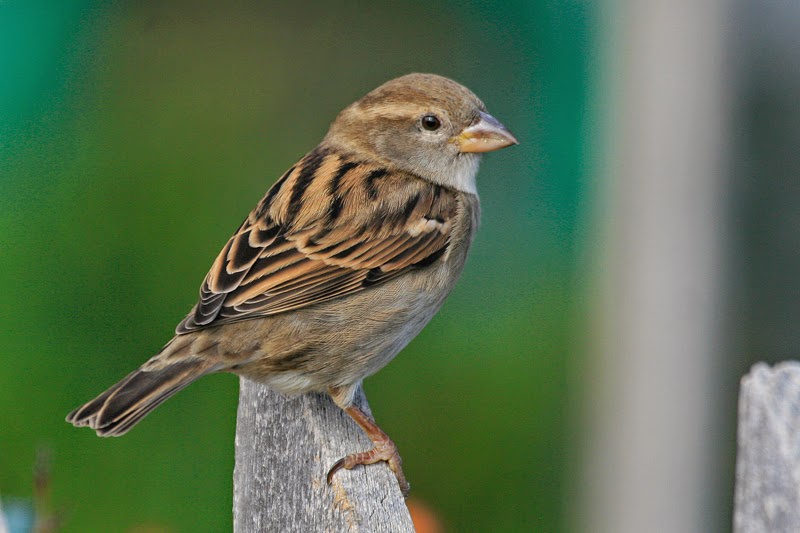 January 1st is perhaps the only time that most birders show an interest in the much-maligned House Sparrow. But this bird, like so many species, makes an ideal subject for study and getting more from your birding. I discovered on our walk, for example, that few people know about the interesting social structure of this species, demonstrated to us on our walk when we discovered that one of the Cape May Point House Sparrow meeting points had been removed ready for (yet more!) development and the birds had moved to another location just across the street - what will this do to the social structure of this community of House Sparrows? [Photo by Mike Crewe] 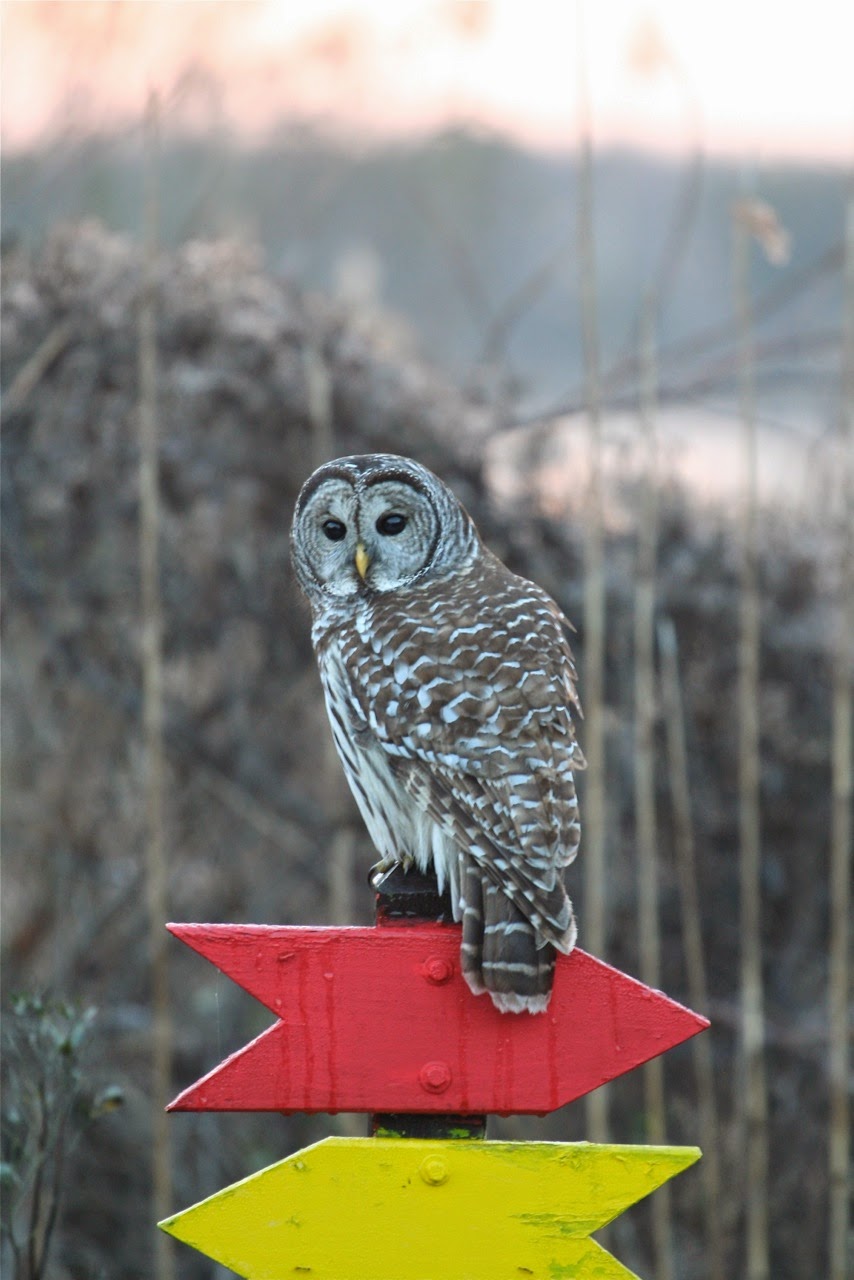 Well, it is Cape May and, although my own year has started a little on the light side, others are enjoying some fabulous birding experiences here. This Barred Owl, perched out as bold as brass on one of the state park trail signs, is just reward of you put in the time in the field - good birding to you all! [Photo by Don Fraser]
Posted by Mike Crewe at 3:53 PM