Things to do on a snowy day - sorting out the sparrows

Sometimes it can be tough making the decision to go birding when there is snow lying on the ground, the temperatures hover around the freezing mark and there are so many diversionary tactics close to hand, like hot coffee, an unread magazine and isn't it time to dust behind the radiators or sort the M&Ms into alphabetical order - or something....

Well, right about now you really should be thinking of dressing up warm and seeing what's happening in the natural world, for winter can be a very interesting time - and certainly a great time to observe and contribute to our knowledge of wildlife. In the past few days, two locations have featured strongly in the observational reports we are receiving from around Cape May - Sunset Beach and Stone Harbor Point. Sunset Beach, overlooking the concrete ship is currently a great place to sit and study Red-throated Loons, Bonaparte's Gulls and Surf Scoters, all of which are feeding on an apparent wealth of food there right now. Scan carefully and you might also find the Black-headed Gull that has been showing well there early mornings (I hear there may have even been two yesterday), as well as several Forster's Terns. Other birds ferry up and down the bay and parties of Black and Surf Scoters, Brant, Red-breasted Mergansers and others should be expected.

A phone call at the Northwood Center at 08:30 this morning revealed that a Snowy Owl had been found near the southern tip of Stone Harbor Point - now there's a gung-ho observer! Stone Harbor Point was in the news this time last year for a number of good birds - Snowy Owl, Smith's Longspur and Le Conte's Sparrow were all there for the finding. At present, at least one Lapland Longspur is hanging out there, but one of the best reasons to head out to the backbay marshes right now is that it is a good time to get to grips with those elusive marsh sparrows! Seaside, Nelson's and Saltmarsh Sparrows all winter in good numbers in New Jersey's spartina marshes but getting a good look at them can be tricky. So here's what you need to do. Pick an area of marsh that has easy access - somewhere that a road passes right through the saltmarsh, or where a boat ramp gives you easy access (Stone Harbor Point and Nummy's Island are good places, but there are many more). Take a look at the tide tables for the area of marsh that you choose and plan to visit an hour or two either side of the highest spring tide of the month. On such tides, the birds can be pushed right off the marsh and onto the roadsides. Wrap up warm and walk quietly along any line cover that there might be along the side of the road and you should soon be spotting dark and elusive shapes flitting ahead of you. Careful watching and patience are required but, almost inevitably, you will eventually get birds settling where you can see them. And now the fun begins - identifying them!

Armed with your favorite field guide, take careful note of face and chest color and pattern, consider the relative size of the bill - and get photos if you can. Here's a quick photo guide to help you in your quest, oh, and don't forget to eBird your sightings afterward. If you find a good spot and visit it on a regular basis, you can really contribute to citizen science and give researchers some useful data on these elusive birds. 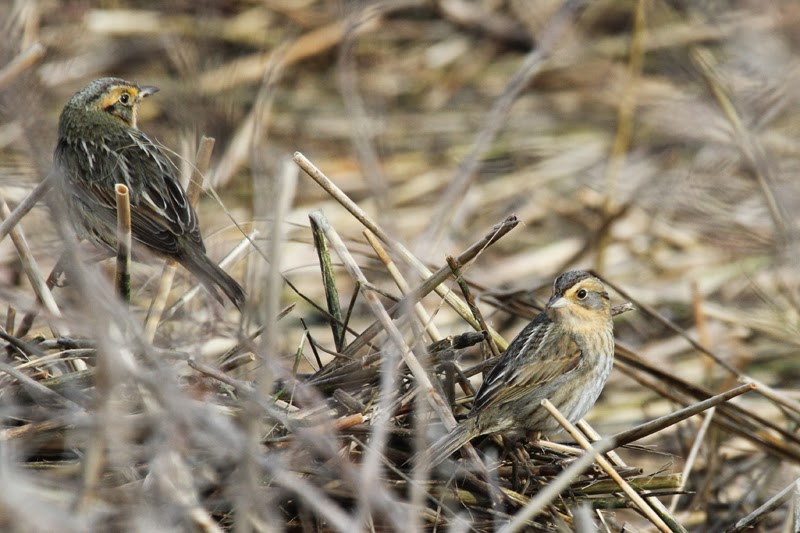 Given a high tide and a good strand line of dead plant material, there is plenty of opportunity to study the elusive 'little brown jobs' of the backbay marshes. Typical views like this can leave one bemused and confused; these birds are perhaps not identifiable from this single shot and such brief views are commonplace. Take it from me though, the left hand bird turned out to be a Saltmarsh Sparrow and the right hand is a Nelson's! [Photo by Mike Crewe] 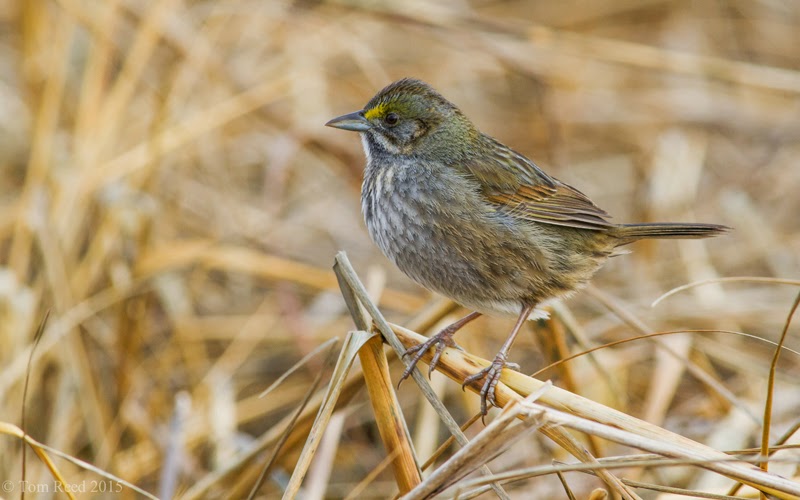 Views like this are to be dreamed about, but they can happen! Seaside Sparrow is the largest, plainest and grayest of your target species. They have long, stout bills and a yellowish patch on the front of the supercilium. Note how dingy-looking the bird is on its underparts. [photo by Tom Reed]. 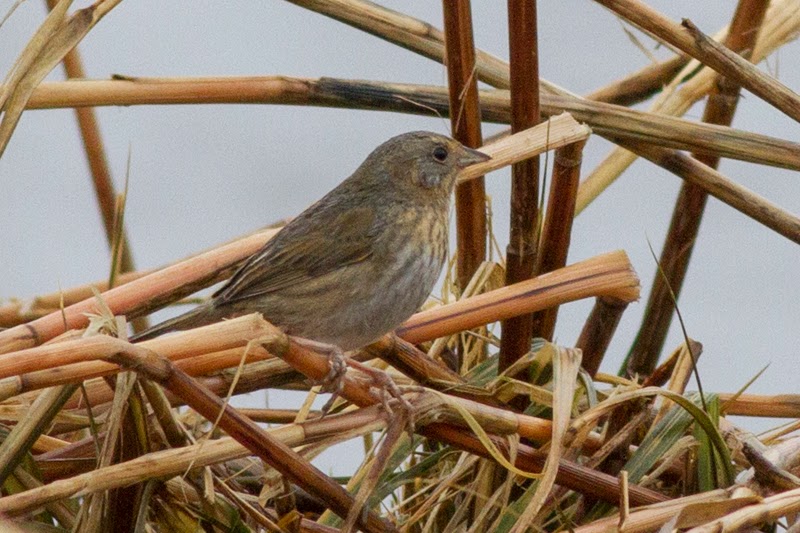 Nelson's Sparrow can be a complicated species as we have birds from more than one population wintering with us. Birds like this come from a coastal population that breeds in New England. They are overall dull and gray-looking but they differ from Seaside Sparrows in being shorter-billed and whiter underneath, with an orangey wash to the breast [photo by Sam Galick]. 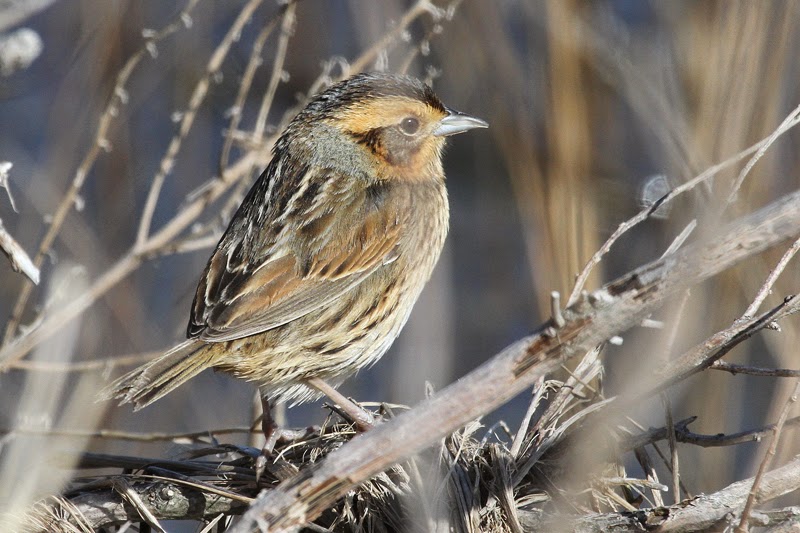 We also have Nelson's Sparrows from an interior breeding population, centered around Alberta, Saskatchewan and North Dakota. These birds are more brightly colored and can be hard to tell from Saltmarsh Sparrow. Indeed, until recently, Nelson's and Saltmarsh Sparrow were all considered a single species and you will find them called Sharp-tailed Sparrow in older books. On this bird note the clean, orangey supercilium, contrasting gray nape patch and well-defined dark flank streaks, as well as the relatively small bill [photo by Mike Crewe]. 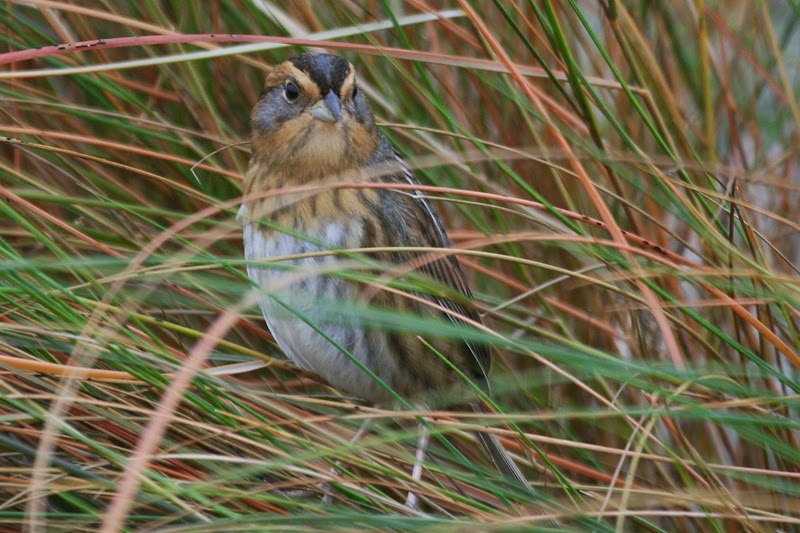 Seen from the front, interior Nelson's Sparrows usually show a strong and well-defined contrast between the orangey wash on the breast and the white belly [photo by Mike Crewe]. 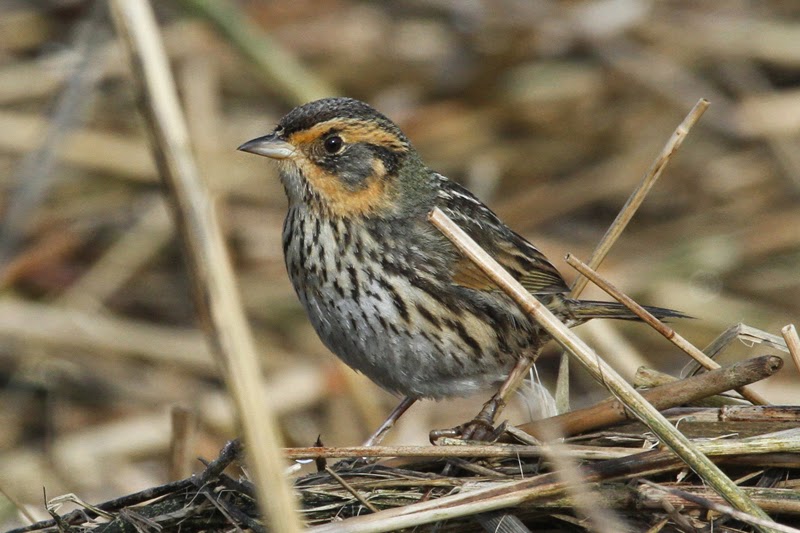 The final species of the marshland trio is Saltmarsh Sparrow and this is probably the hardest to find of the three species. This species has many differences in plumage from interior Nelson's Sparrows, but they are all rather subtle. Note the lack of color contrast between the chest and belly, the dark flecks in the orange supercilium, subtly longer bill and stronger flank streaking compared with the Nelson's Sparrows above [photo by Mike Crewe]. 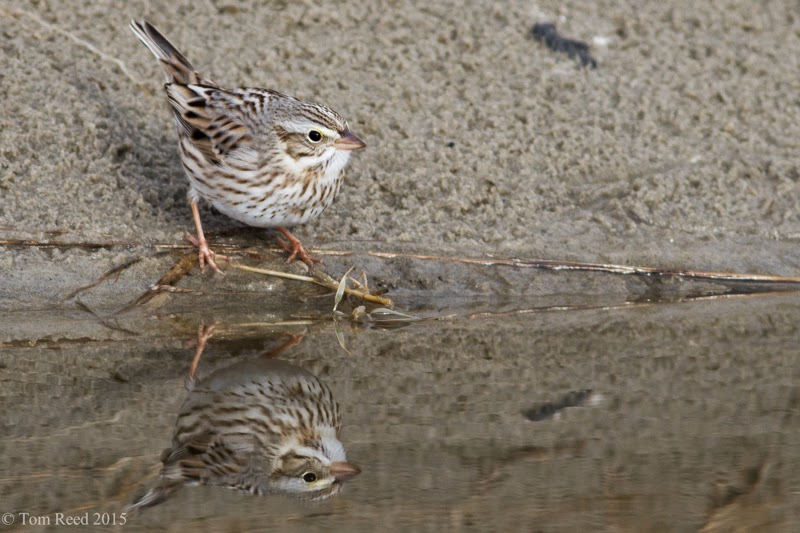 Now that you have those all sorted out, here's something to be aware of - Savannah Sparrow! Savannah Sparrows are common birds of the saltmarsh edge, which means you are more likely to find them along the roadside or edge of the dunes than right out in the saltmarsh. So they will be around if you go searching for the other sparrows at high tide. Savannahs are much paler and finely streaked all over. Many of our coastal wintering birds are from the Sable Island population known as Ipswich Sparrows - like the bird above - and these are especially pale and frosty-looking [photo by Tom Reed].

Go check out the sparrows and put all this into practice. It won't be easy, but that's all part of the fun - any bird that you have to work a little harder for will be so much sweeter once you crack it!
Posted by Mike Crewe at 3:52 PM