Owls in the News

Owls have been a recurring theme at the bird observatory the past few days and winter often does seem to be the time of year when these birds become more obvious to us. The larger species of owl have pretty long breeding seasons so need to start early and, at this time of year, Great Horned Owls are always very vocal as they reconfirm territories with their duet calls. Yesterday evening, a number of us were out at sites along the coast and bayshore throughout South Jersey, taking part in a long-running survey to monitor wintering raptors on our coastal wetlands. At the site I was counting, we finished off with a stunning bayshore sunset, flaming the sky behind the silhouette of a Great Horned Owl, perched on an Osprey platform. Surely one of the most iconic images of the Delaware Bay in winter.

The earlier anticipation of another Snowy Owl winter has faded, but one or two of these wonderful Arctic birds has been reported along the New Jersey coast so it's certainly worth keeping an eye out - there's a few out there somewhere. In the meantime, Project Snowstorm continues to provide us with amazing data on these birds and it is well worth visiting the project website on a regular basis to see what else has been learned.

Down here at Cape May Point, the buzz about owls has mostly been about Barred Owls - and one Barred Owl in particular (though maybe there is more than one...). Back in late fall, a Barred Owl showed up at the state park and bucked the usual trend by sitting out in full view for all to see. Ideas of keeping the bird's presence quiet to allow it not to be unduly disturbed seemed rather moot - this bird was free to go off and hide in the darkest depths of the wet woods, but was choosing to watch the world go by from prominent perches right beside the trails! With the start of a new year comes the start of new year lists and interest in this bird was renewed. Was it still around? Well, yes, and it's still disporting itself for all to see! Tales of close encounters with this bird have been many and we have received a lot of photos of it. There's no telling exactly when and where it will reveal itself as it does move around but, if you are at Cape May Point State Park, keep your eyes peeled. A couple of evenings ago, I received a phone call from one of our volunteers and was soon watching the bird right near the lighthouse, before it wafted across the road and sat watching traffic right in a roadside pine tree. 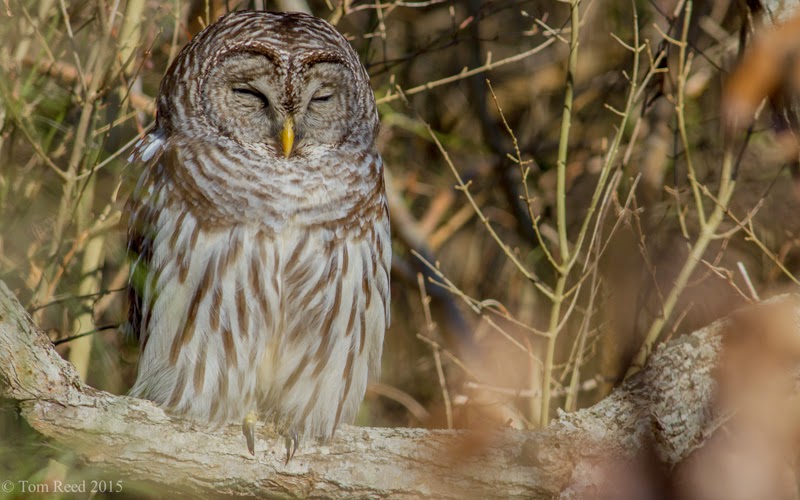 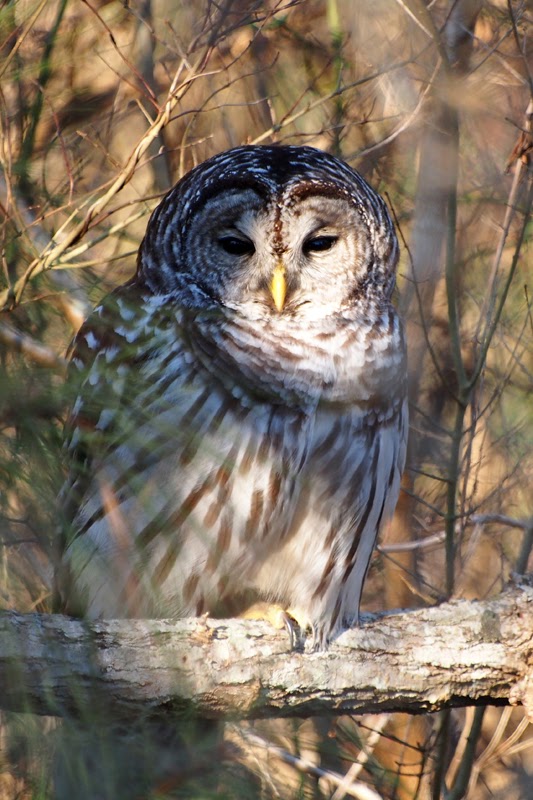 Two wonderful portraits of the Barred Owl that is currently calling Cape May Point home. There's little in the way of suitable breeding habitat for this species down here, so we will probably lose this bird in due course, as it wanders off to set up a territory elsewhere. But for now, it's a welcome addition to the neighborhood [top photo by Tom Reed, bottom photo by Sean McDermott]

One other encounter that I had with owls this weekend was not quite so wonderful - but was interesting as it involved a bit of detective work. At the bird observatory we received a phone call from a resident in North Cape May who had found what she thought to be a dead owl beside the road near her house. Expecting the usual blunt trauma encounter with a vehicle during the night, I went over and soon found the bird - a majestic Great Horned Owl. These birds often hunt along roadsides as many animals have to break from cover to cross open roads, making them easy targets for silent owls during the hours of darkness. Indeed, since owls, like most birds, have a very poor sense of smell, Great Horned Owls are probably the most significant predators of skunks and the well-eaten remains of a skunk in your yard is almost certainly a sign that Great Horned Owls are in your area.

Picking up this unfortunate owl, I was immediately struck by a strong smell. Not the smell of decay, for this was a freshly dead bird. This was a smell of burning. So what had happened to this bird? A closer look revealed that many of the bird's feathers had blackened melted tips with blackened blobs at the ends. I had seen this before and knew that this was a sign that the bird had been electrocuted. Sadly, a number of owls and diurnal birds of prey meet an untimely end when they collide with power lines. Landing on a power line is fine - it's if they touch two lines and complete a circuit that the problem arises. Talking by phone with the original caller later in the day, she revealed that they had experienced a power outage that night. It seems that our owl was the reason. 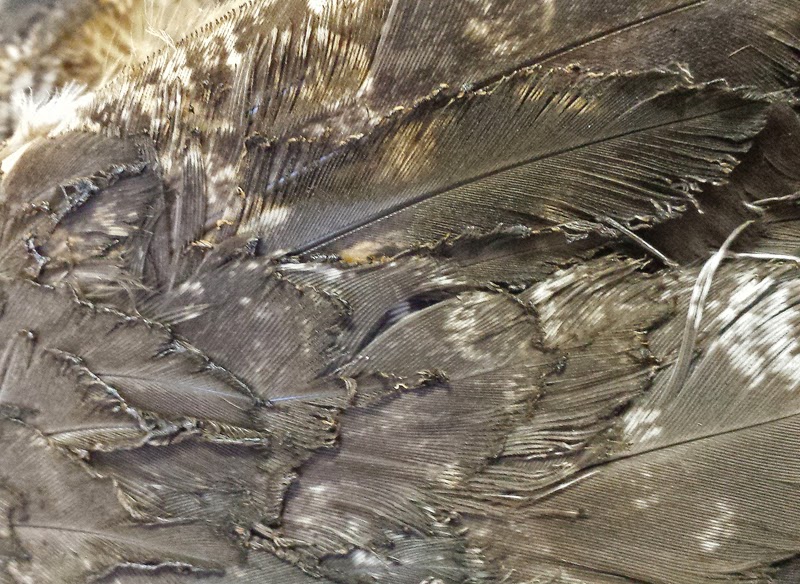 Some of the upper wing coverts of the unfortunate Great Horned Owl. Note how the feather edges are curled up and melted. Learning to be a nature detective can be useful in understanding the lives of the animals that live around us, such that we can learn to share space with each other in the best way for all of us [photo by Mike Crewe].

Though the loss of this owl is sad, some benefit for science can be gleaned from it. The bird will go to become part of the ever increasing collection of study skins at the Academy of Natural Sciences in Philadelphia. In addition, the bird carried a US Fish & Wildlife band on its leg and the details of the finding have been submitted to the banding lab, adding to our knowledge of bird movements and longevity in the region.

Humans have always had a great fascination with owls. If you want to know more about these fabulous creatures and have a chance to go and look for some, our Wintering Eagles, Hawks and Owls program is filling fast but still has one or two places left. Check out the details and give us a call on 609-761-0700 - we'd love to have you along! 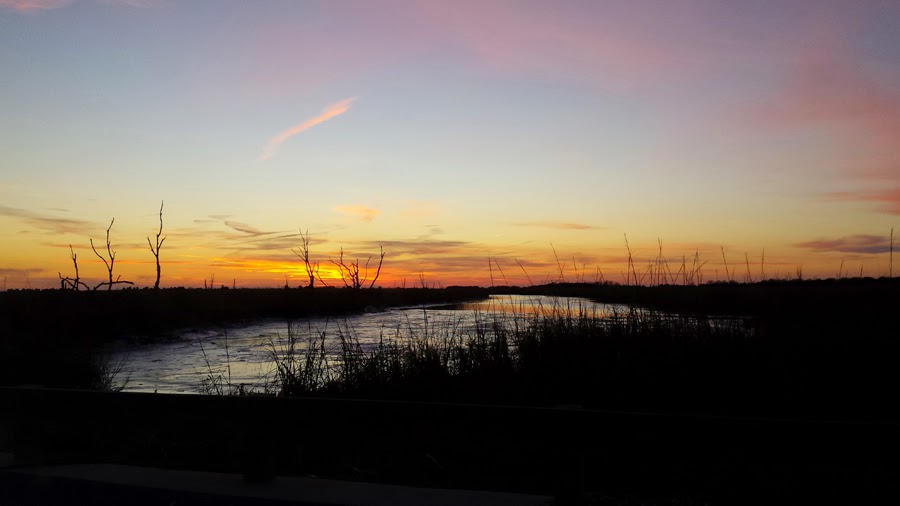 A bayshore sunset at Thompson's Beach - Great Horned Owl in there somewhere! [Photo by Mike Crewe]
Posted by Mike Crewe at 12:03 PM