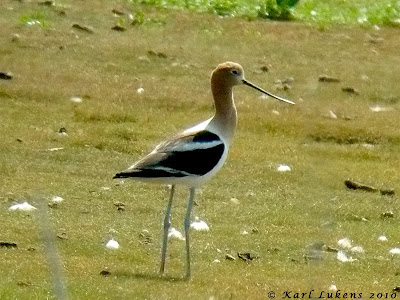 [Yesterday's American Avocet at the South Cape May Meadows has not been reported today. Photo by Karl Lukens.]

Tom Reed had flyover Bobolink and Gull-billed Tern at Tuckahoe, where he's doing a harrier survey, and Richard Crossley had an Eastern Meadowlark and another Bobolink at the South Cape May Meadows. Eastern Meadowlark can sometimes breed south of the canal (but seems not to have this year), but the Bobolinks are southbound migrants, nesting no nearer than Salem County. The BOBO's (love that banding code) have a long way to go, wintering from Brazil southward. 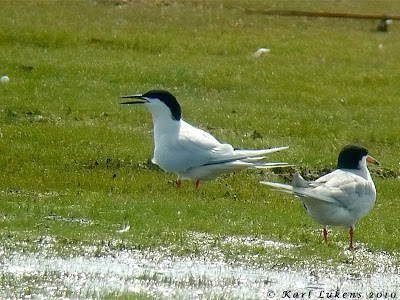 [Karl found this Roseate Tern in the meadows yesterday after locating the avocet (not sure who found that). If you see a tern and have to "make it" a Roseate, it probably isn't one - they really look the part, so pale and with the thin, long black bill.]
Posted by Don Freiday at 11:56 AM