[One can guess that the two juvenile Wood Ducks at the South Cape May Meadows today hatched at the Beanery - where the species was detected for much of June. Click to enlarge photos.]

Hot though it was, "fall" migration was evident at the South Cape May Meadows a.k.a. TNC Cape May Migratory Bird Refuge this morning. My favorite was the fast flying flock of 4 Short-billed Dowitchers and 5 Lesser Yellowlegs, headed straight for, and presumably across, the bay. The dows were my first southbound ones of the year; Vince Elia had a single yesterday, also at the meadows. Other shorebirds included a single breeding plumage Sanderling on the beach; 3 Least Sandpipers and a Semipalmated Sandpiper in the east pool of the meadows; and a breeding plumage Spotted Sandpiper on the edge of the plover pond. The Glossy Ibis parade continues as well.

Meanwhile the breeders continue strong, including a boisterous Yellow-breasted Chat west of the parking area, which sang and display-flighted much of the morning. Chuck Slugg detected the very first baby Least Terns, so it's time to watch their education - learning to scuttle along the sand, then fly, then finally catch their own food. It takes about 3 weeks for Least Terns to go from hatching to flying.

[25-30 Black Skimmers have been loafing at the meadows, with some sitting in obvious pairs with one member of the pair in a scrape (bird on left in photo.) I haven't heard of anyone seeing eggs, which might not be visible from outside the fenced off area (where birders MUST stay!). The only large skimmer colony this year is west of Ocean City, one of the highlights of CMBO's Somers Point Thursday night boat trips.]

We saw chicks of both American Oystercatcher and Piping Plover, not to mention one of the Gadwall broods. The full list is up on field trip reports. 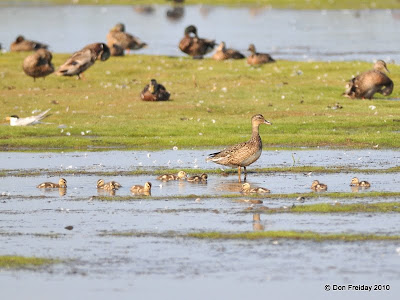 [Hen Gadwall and her brood, Cape May meadows today. Several pairs of this species nested here this year.]
Posted by Don Freiday at 3:45 PM