The 4th of July Butterfly Counts are the lepidopteran counterpart of the Christmas Bird Counts, and the the three Cape May and Cumberland CBCs each have their butterfly counterparts in the same circles. Today was the day of the Belleplain count and Glen Davis and I joined a bunch of other butterfly afficionados in counting in that circle. Unlike bird counts, it's not necessary (or even useful) to go out at night, nor to start the day at dawn -- butterflies are just such reasonable beasts! We met at the Belleplain State Forest HQ at 9 am to get area assignments from the compiler, Teresa Knipper. And, quickly, before you get lost in today's details, the Cumberland count (compiler is Pat Sutton) is tomorrow (30 June) and the Cape May count (compiler is Michael O'Brien) is 22 July.

The overcast start to the day made for slow butterflying, at least for Glen and me, who had probably the cream of the areas, Area 5 in the NE section of the circle, and supporting most of the cool, boggy habitat in the circle. The area hosts such beasts as Two-spotted Skipper, Mulberrywing, Banded Hairstreak, Bog Copper, and Georgia Satyr, among a plethora of other rarer and interesting butterflies. Early on, we found one of our two Banded Hairstreaks for the day north of Tarkiln Pond (photo by Tony Leukering). 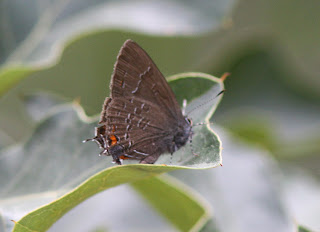 But, most unfortunately, that was the end of our day's list of interesting butterflies, as the mostly overcast skies kept butterfly activity to an incredibly low level in our area, despite our hiking and slogging through such wonderfully juicy habitats. Though we couldn't make any great contribution to the butterfly count, we thoroughly enjoyed the odonate (dragonflies and damselflies) show, with each of us adding a number of lifers to our lists. Among the most exciting were the emeralds in Cumberland Co. along the dirt road south of Hwy 49 across from Estelle Manor Road. There were a lot of emeralds (>50) flying at various levels over the road and my 2 of 5 successful net swings garnered two lifers, one each of Clamp-tipped (left by Glen Davis) and Treetop (right by Tony Leukering) emeralds (note the differing shapes of the terminal appendages on these males and the Treetop's two dorsal bands near the tip of the abdomen).

Amazingly, later in the day, I found a perched Treetop Emerald below eye level along the "road" on the way into Tarkiln Bog, Cape May Co. 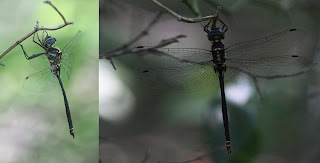 The other lifer odonates are pictured below (all photos by Tony Leukering). 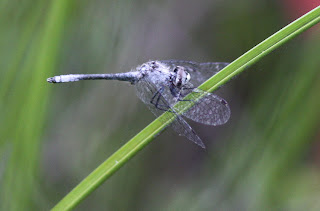 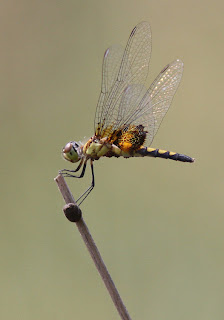