Back into the old routine

Having been away for a couple of weeks, it's hard slotting back into the good old regular routine, so I'll start with a quick apology. Of course, this being Cape May, you can be sure that birds have been out there to be found in South Jersey and there has been much to enjoy. Primary on the minds of most folks has been - without question - the continuing invasion of Snowy Owls along the eastern seaboard of North America. Much has happened since we last posted on them and the fact that so many people are not only looking for, but reporting, these birds has meant that we may yet learn much more as the winter progresses. We encourage anyone seeing a Snowy Owl to get into the habit of entering the sighting into eBird, where data collected can be made available to those who are studying this notable movement of birds. If as many sightings as possible are lodged in a single place, rather than scattered across any number of different forms of media, it will be much quicker and easier to make sense of what is happening.

At the simplest level, studying photos of birds has allowed us to follow the local movements of a few birds. Further afield, a bird was trapped and had a satellite tracker attached; these pieces of kit cost over $2000 so we're not going to see too many of these out there, but the information so far received has already clearly demonstrated how much some of these birds are moving around. The bird was tagged at Assateague Island on the Maryland coast and has since moved north to Cape Henlopen, Delaware, across the bay to Cumberland County and was last reported from Cape May County. Cearly this bird is not just moving in one direction. You can read more about this story here: http://mdcoastalbays.wordpress.com/2013/12/21/the-snowball-effect-of-project-snowstorm/.

Also of great interest are the reports coming from Bruce Mactavish in Newfoundland. The numbers of Snowy Owls have been truly staggering, with over 300 birds counted during a concerted effort a couple of weekends ago!! For a full story, follow this link: http://brucemactavish1.blogspot.com/2013/12/300-snowy-owls-in-newfoundland-weekend.html?m=1

As for our local situation; the last time I checked, there was still at least one, perhaps two, Snowys in Cumberland County, possibly up to seven in Atlantic County and around five or so in Cape May County. With no shame what so ever, I present here yet another set of awesome photos of Snowy Owls, photos that have been sent to me over the past couple of weeks by people enjoying these wonderful birds. If you still haven't been out to enjoy the bird that the Inuits call 'Ukpik' then it is likely that birds will be around for a while yet. Both CMBO through our regular programs and Scott Barnes and Pete Bacinski through NJA's All Things Birds programs will be running a series of winter birding programs that offer a chance to enjoy the great owl of the north; if you want to treat yourself to the very best of starts to the New Year, check out our January programs, book yourself a place and we will see you in the field! 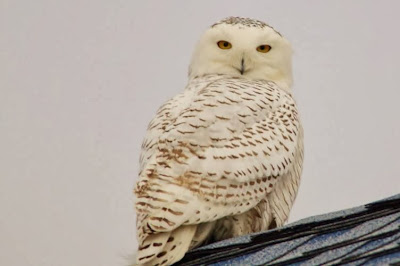 Snowy Owls are birds of the high Arctic, where Humans are rarely perceived as a threat to them. As such, they can be surprisingly tame at times and probably look at us more with bemusement than anything else. This male spent time loafing on a rooftop in Stone Harbor, so check out all those plastic owls around the barrier islands - one of them just might be looking back at you! [Photo by Kimberly Royster] 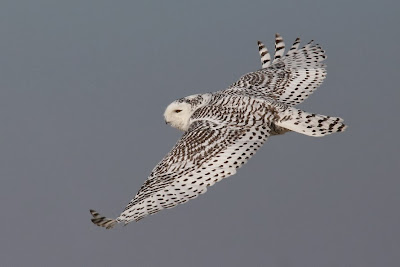 Shiny white male Snowy Owls might be more immediately eye-catching, but beautifully marked females such as this bird at Stone Harbor Point have a magnificence all of their own [photo by Joe Debold]. 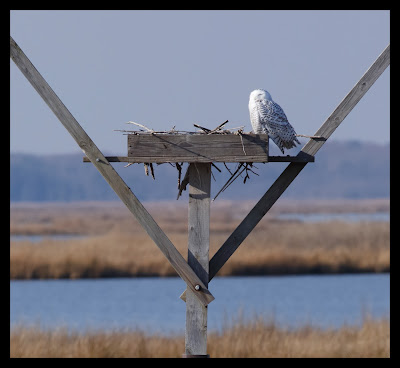 As well as the open beach fronts and dunes of the barrier islands, it is worth checking all those Osprey nesting platforms that you can see from the boulevards across the marshes. Here's one idling away the daylight hours on a platform at the Forsythe NWR (Brigantine) recently [photo by E J Nistico]. 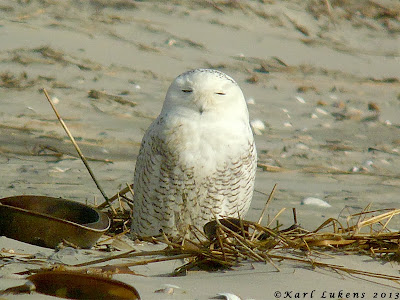 This male was at Two-mile Beach until fairly recently and may look familiar in this photo if you have been studying all the birds posted so far... I particularly like this shot of a Snowy Owl sitting among the molted shells of Horseshoe Crabs - a real South Jersey special! [Photo by Karl Lukens] 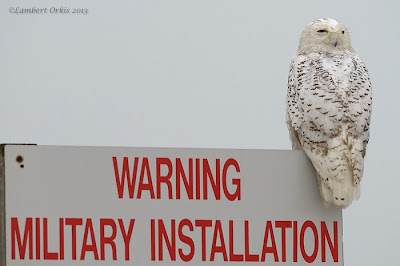 This second shot of the Two-mile Beach bird reveals that this bird was at Stone Harbor Point back in early December and is one of two that I posted pictures of from there on this blog on December 2nd. Note, especially, the tail pattern and the pattern of the lower scapulars (sorry for being technical!) [photo by Lambert Orkis].


Other news
You could easily be forgiven for thinking that the Snowy Owls have driven all the other birds out of New Jersey, such has been their grip on the world of bird news - but far from it (though conversely, I noticed in town today that it is impossible to find a fluffy Snowy Owl gift anywhere in Cape May right now, but there's plenty of other species to choose from!) So what else has been happening? Well, most recently, the local highlights have included up to two Western Kingbirds at the eastern end of Cresse Lane in Erma, two female King Eiders that have been hanging out at the free bridge at Nummy's Island and - briefly on 19th at least - a male Harlequin Duck at Cold Spring Inlet.

The 2013 Avalon Seawatch finished on something of a yucky day of wintery rain and wind yesterday and massive thanks are due to Calvin Brennan for carrying out this sometimes demanding, but essential, count. Razorbills put in a good appearance towards the end of the count last week as well as a scattering of Redheads and Canvasbacks. News on the six Sandhill Cranes seems to have dried up of late, with the last report I heard of coming on the 17th, but they may still be in the area.

Other news includes continuing late hummingbirds at a number of feeders - with Ruby-throated Hummingbirds competing with Rufous Hummingbirds to be last of the year. A Baltimore Oriole was at a Cape May Court House feeder on 22nd, a presumed escapee Whooper Swan continues to be reported along East Moss Mill Road in Atlantic County and a Laughing Gull was at Sunray Beach on 23rd. 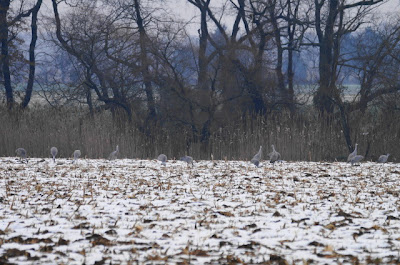 It seems that it is not just Cape May that has had a recent influx of Sandhill Cranes. Though small numbers of these birds have been established in Salem County for some time now, there has been a marked increase in number of late with perhaps 10 new birds having appeared. This photo shows 13 of a flock of 16 that was around mid-month [photo by Jeff White].