Well, the prediction of a Snowy Owl for Thanksgiving certainly came true - and the wonderful run of Snowy Owl sightings looks set to continue. Trying to find time to work out how many we have in South Jersey is proving difficult simply because news of new birds just keeps on coming!

To date, the minimum number of birds in our neck of the woods seems to include three or four at Brigantine/Holgate, one at Barnegat Light, one in Gloucester County, one or perhaps two around Corson's Inlet and at least four different birds at Stone Harbor - and even as I write, news just came in of two flying south past the Avalon Seawatch, one of which landed on the 8th street jetty. How much overlap there is between sites we won't know until we can get time to properly study photos of all birds from all angles so I would encourage as many people as possible to send photos to CMBO to help us make sense of all these sightings.

As time progresses, owls are being reported from more and more locations along the eastern seaboard; yesterday, Newfoundland birders co-ordinated a count and came up with 138 Snowy Owls in the SE corner of the island - what an awesome total!! While at the southern end of the coastline, individual Snowys have reached Cape Hatteras in North Carolina and - believe it or not - Bermuda!

One thing that should be mentioned here is a word to allay fears. For many years, it was always assumed that irruptions of Snowy Owls like this one - which are actually not that unusual - are an indication that the birds are starving and that the movements are indicative of a crash in the lemming population. In actual fact, for some years now, researchers have been indicating that movements like this are more often a result of a really good breeding season for the owls (probably due to a good lemming year) and the movements almost entirely involve first-winter birds seeking good hunting grounds elsewhere. It may be some time before we find out why this is happening - and maybe we never will - but for now, let's just enjoy these spectacular birds and hope that we get 138 at Stone Harbor Point!!

Here's some pictures from Stone Harbor, taken this weekend and showing details of the three birds that were there - a female on Saturday and two males on Sunday. Neither of Sunday's males were the same bird as was present there earlier in the week. 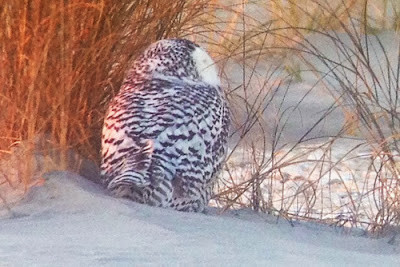 I still haven't managed to clap my eyes on a female, but this bird was at Stone Harbor Point on Saturday and is clearly a female - and most likely a first-winter. Note the well-barred pattern of the tail and tertials and the heavy black marks on all the upperparts. The tail pattern is difficult to see here, but the central feathers appear to have at least four bars on them, with the marks almost continuous across both inner and outer webs of the feathers [photo by Tom Reed]. 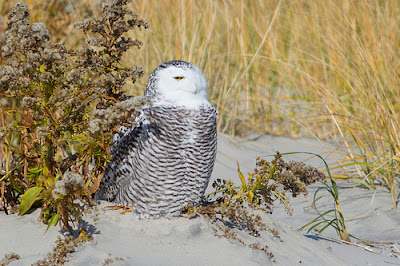 The same bird as above, Stone Harbor Point, November 30. Again, a typical female; note the heavy barring on all but the face and note how small the frontal bib is on the top of the chest. Many of these features in isolation are not necessarily conclusive, but all together we have a pretty certain female here [photo by Sam Galick]. 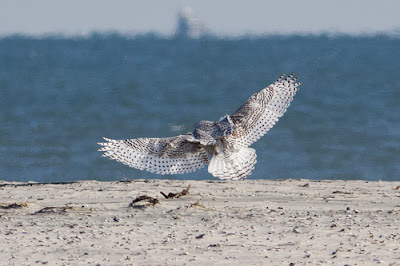 A third picture of the same bird above, Stone Harbor Point, Nov 30. The tail pattern is easier to see here and shows two more or less solid bars and two broken ones on the central tail feathers - indicative of a female. Note also here that the barring on the inner primaries appears to be more or less evenly spaced along the length of the feather; though I have not read anything about primary markings in Snowy Owls, a heavy session on the internet last night, studying what appear to be reliably labelled photos of Snowy Owls, suggests to me that males typically have the dark marks on the primaries concentrated toward the distal part of the feather, leaving an obvious pale patch at the base of the primaries [photo by Sam Galick]. 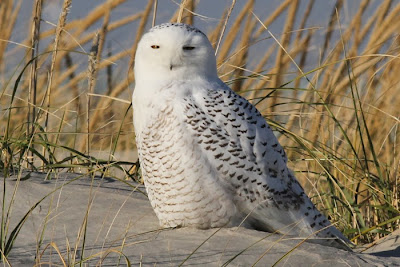 The first of two birds that I saw at Stone Harbor Point on December 1. Somewhat unexpectedly, this bird was in almost the exact spot as the bird I saw earlier in the week and it would be all too easy to assume it is the same bird. The relatively large, white, frontal bib, relatively narrow dark barring and smudgy marks on the greater coverts all suggest a first-winter male, like last week's bird [photo by Mike Crewe]. 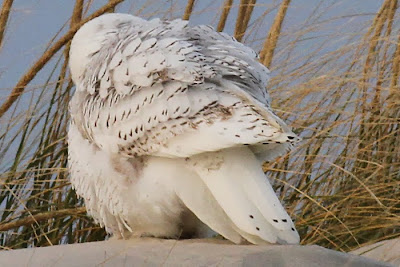 But here's the same male as above, in a different position. Last week's bird had two and a half dark bars, broken into isolated spots on its central tail feathers. On the one central feather that can be seen here, there is clearly just one dark bar, formed by two, well isolated, dark spots [photo by Mike Crewe]. 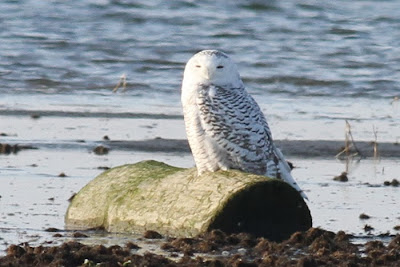 The second of two birds at Stone Harbor Point, December 1. This bird is one of those inbetweenies that can be hard to call, but I'm sticking my neck out on it being a young male. The smudgy marks on the greater coverts certainly suggest this is a first-winter bird, while the tail pattern suggests a male. This bird was roosting on a log on the tidal mudflats, so was guaranteed to have to move at some point [photo by Mike Crewe]. 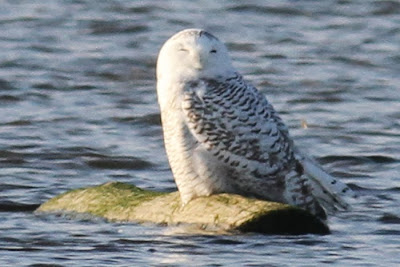 With the tide getting higher, the bird lifts its tail and makes it a little easier to see - now we can see three, rather small bars, made up of isolated dark spots - a typical male tail pattern [photo by Mike Crewe]. 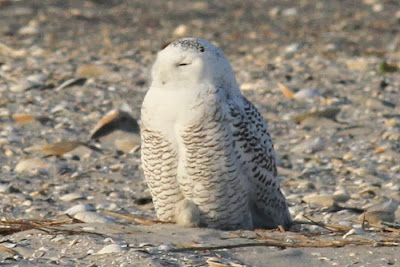 Having moved from the incoming tide, I got a chance to photograph the front of this second bird, and it certainly shows a typical male pattern - fine dark barring and a relatively large, white bib. Note the heavy, dark crown spotting on this bird which is very different to the other two males [photo by Mike Crewe]. 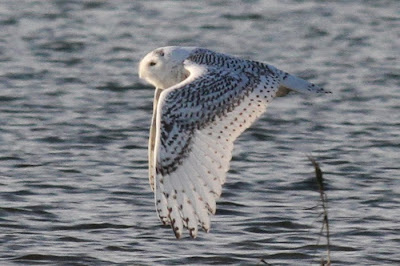 The second of two Stone Harbor Point birds, December 1. Of course, having to move from the rising tide meant that this Snowy had to fly past us to get back to the beach. Features mentioned in the two photo captions above indicate why this appears to be a male. With this in mind, note the unspotted section of the primary bases that I detected on many birds on the internet. Could this be a useful feature for telling male Snowys from females? [Photo by Mike Crewe]
Posted by Mike Crewe at 4:59 PM