Well, November 2013 may not be remembered for producing any really big rarities, but it certainly dealt Cape May an exciting batch of other goodies. Most memorable among these at the end of the month will be the record-breaking count of Golden Eagles, as well as those infuriating Sandhill Cranes! I say infuriating because they really have been giving us the run-around this past few days. It's only when you jump into a car and try to get from one side of Cape Island to the other in time to track down some wandering cranes that you realize that four miles is a long way! Back and forth they had people going, up and down Sunset Boulevard, but eventually, today, three of the birds settled for a while in an old Sweet Corn field between Shunpike and Seashore Roads and allowed a number of people to get good views of this stylish bird.

With two more sightings of Rough-legged Hawks today (perhaps involving the same individual) it does seem as though there could yet be more opportunities to catch up with this species in Cape May this year. Northern Goshawks are putting in an appearance now too and reports today included the remarkable sight of a Northern Goshawk chasing an American Woodcock over the meadows!
A female Snowy Owl popped up at Stone Harbor Point today and I at first assumed that it would be the Brigantine bird from a couple of days ago, but it seems that that bird is still present, so numbers of this fabulous Arctic wanderer continue to grow down here and - with much luck - we could see the odd bird staying for a while and giving us plenty of opportunity to enjoy them. 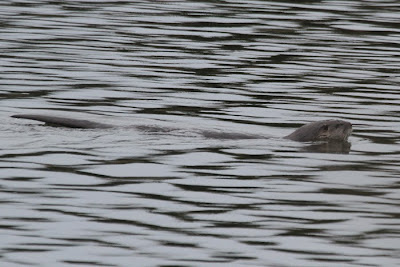 Keep an eye out for River Otters at this time of year, this one was in Lake Lily right in front of the Northwood Center a couple of days ago [photo by Mike Crewe]. 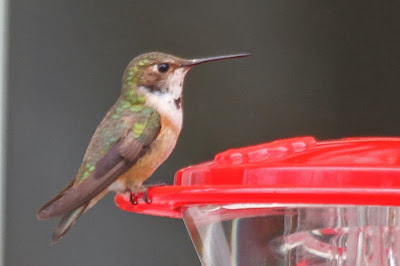 Despite recent cold snaps, a few new Rufous Hummingbirds are still popping up at feeders in the area. This male Rufous (confirmed by call) was at Cambridge and Coral Avenues at Cape May Point on 26th [photo by Mike Crewe]. 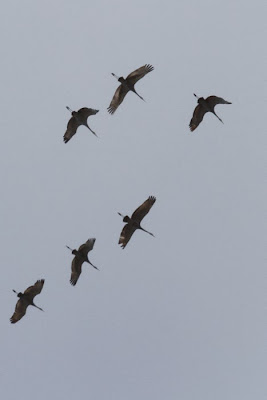 Up to six Sandhill Cranes have been wandering around Cape May Point over the last three days and have largely proved elusive. I managed to get myself perfectly positioned for some great flight shots - only to find I had blown it by having the camera on the wrong settings! O well, this one's not too bad... [photo by Mike Crewe]. 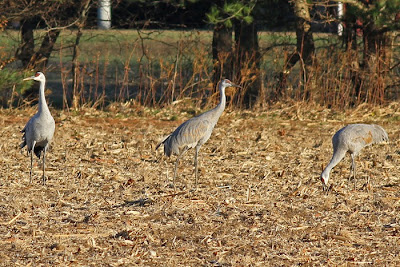 Eventually today, three of the Sandhills descended to ground level and gave good views off Seashore Road. You can just make out the duller head pattern of the younger bird in the middle, showing this to be a family party [photo by Mike Crewe]. 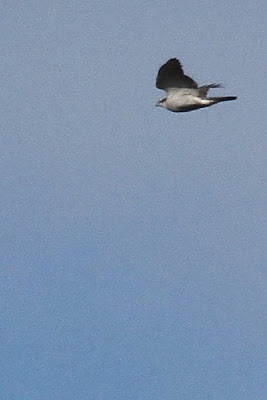 Same day, similar camera failure as the cranes! A chunky, adult female Northern Goshawk is a scarce sight at Cape May Point - most birds that pass through here are youngsters - so this bird was a real treat. When seen close enough like this, it's easy to tell the broad-beamed, short-tailed, heavy-chested shape of a Northern Goshawk from the more streamlined look of a Cooper's Hawk [photo by Mike Crewe] 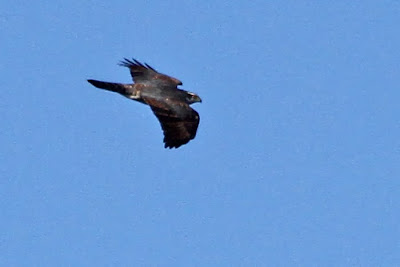 The same Northern Goshawk as above; you can just make out the well-defined dark ear coverts and white supercilium on this bird [photo by Mike Crewe]. 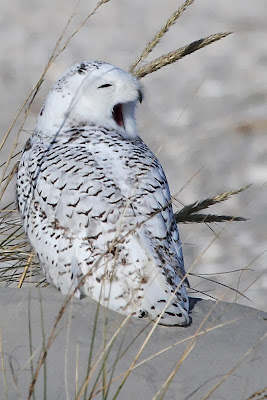 I hope you enjoyed a beach stroll yesterday or today and took the opportunity to go and look for Snowy Owls. At least three and perhaps four birds have been reported in South Jersey over the last couple of days so photos will be of great benefit in helping to decide how many individuals are involved. This one looks as though he's already bored with the whole process though! [Photo by Mike Crewe]

Don't forget, Saturday is the last day of the 2013 Hawkwatch at the state park, so do come and join in for the final tally.
Posted by Mike Crewe at 5:28 PM