In search of rarities

It's become something of a low key event that Cape May's birders look forward to in late November each year - the rarity round-up. Over a chosen weekend, we try to rustle up as many enthusiastic folks as we can to have a good root around Cape May and see what's lurking out there. While the well-known locations around Cape May Point are, of course, given a good going over, the opportunity is also taken to check out other, likely-looking yet less-visited locations. While I haven't heard the full role-call of finds as yet, a small band of us certainly enjoyed a few hours checking the beaches around the point, then the back streets of West Cape May.

The Snow Bunting flock - still some 60 birds strong - on the South Cape May Beach continued to conceal the nicely-marked Lapland Longspur today and was a precursor to our enjoyment of a first-winter male King Eider, found with a young male Common Eider by Matt Jewell. It's also worth mentioning here that the bay was crammed full of Red-throated Loons almost riding the surf along the beach, as well as good numbers of Northern Gannets riding the air currents further out. Off Coral Avenue at Cape May Point, at least two Purple Sandpipers were on one of the rock jetties, but the highlight for us here was a gleaming white, first-winter Glaucous Gull found by Megan Crewe. The gull certainly added its place on the rarity list for the day and was followed later by an Iceland Gull, reported by Bob Fogg from The Meadows.

Our tour of the streets of West Cape May was a little quieter than we might have hoped, but sometimes it's all about the timing. There was certainly a nice gathering of blackbirds a couple of blocks away at one point that we looked forward to working through but, by the time we got there, a Cooper's Hawk had moved them all on and the trees were bare. Good numbers of House Finches moving through the streets gave us hope though and, half way along 6th Avenue on the edge of town, Megan again produced the goods with an immature Blue Grosbeak - a common breeding bird around Cape May but certainly an unexpected treat in late November.

Elsewhere, Kathy Horn found a late Blue-gray Gnatcatcher on the final CMBO Beanery walk of the season, but perhaps the real star of the day was the 39th Golden Eagle checked at the Hawkwatch for the season, setting a new record - with still one more week to go. 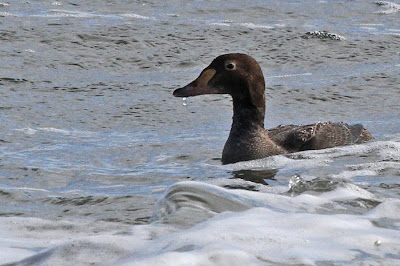 First-winter male King Eider, South Cape May Beach. King Eiders are regular but rare visitors to Cape May County and a bird feeding just beyond the surfline is always a treat. Compared with Common Eider, note the squarer, more compact head shape, the broadened base to the bill that creates a bump in the profile and the pale eye crescents. The largely unmarked, chocolate-brown appearance and pale chest identifies the bird as a male rather than a female [photo by Mike Crewe]. 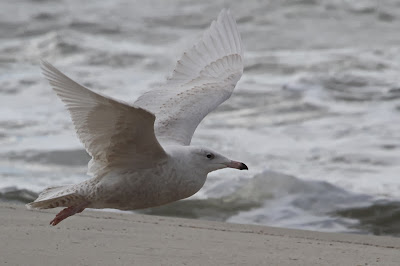 First-winter Glaucous Gulls, with their gleaming white wings, bicolored bills and subtle beige markings are always a fine sight but they never seem to stay for long at Cape May. Though this bird was sitting on the beach when we first noticed it, it wasn't long before it was off and drifting around the corner toward the bayshore [photo by Mike Crewe]. 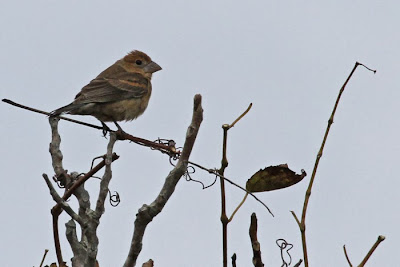 Young Blue Grosbeaks may not be blue, but they are nevertheless easy to identify based on their heavy bills, peaked crowns and warm buff wing bars. This bird was in a hedgeline along 6th Avenue in West Cape May today [photo by Mike Crewe]. 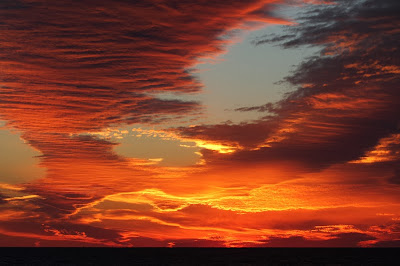 And, as if to prove that Cape May really does have it all - here's an annoyingly spectacular Cape May sunset to round off the day [photo by Mike Crewe].


Coming up
Don't forget next weekend we have a Thanksgiving weekend special trip to Brigantine on Black Friday - the best of ways to finish off the week and to set you up with some great birding. Check out details on our Activities Calendar.