The trouble with hummingbirds... revisited

The trouble with hummingbirds is, even when you think you have them right, it's not necessarily so! Having written the previous post somewhat prematurely when it came to our Black-chinned Hummingbird, it's time to confess to being too hasty. Seeing a hummingbird out in the field is often just the first step to identifying it and, perhaps more often than not at this time of year in Cape May, you find it is necessary to ponder over the photos and even to go back and check the bird again. Michael O'Brien did just that and quickly alerted us to a worrying problem with our bird.

In the first post, I made the point that structure is important when identifying hummingbirds and that is indeed the case. Although our bird looks to all intents and purposes like a Black-chinned based on plumage, it was only when we zoomed in close on some of the photos of perched birds that the horrible truth really came out - the wing structure was unarguably wrong for Black-chinned, but pretty much right for Ruby-throated. So what is going on? Well, Ruby-throated and Black-chinned Hummingbirds are closely related and are both placed in the same genus - Archilochus - by taxonomists. As such, they will be genetically quite close and thus it is possible that they may occasionally crossbreed and produce hybrid young. Hybridization among hummingbirds is actually known to be relatively common in some areas, even between species that are not each other's closest relatives so a hybrid possibility should not unduly surprise us. What makes it surprising among Ruby-thoated and Black-chinned however, is that there are few documented cases (The Birds of North America cites just two references for example) and the overlap zone of the normal distribution of the two species is quite small. However, there is the possibility that a wandering Black-chin could have ended up anywhere within the breeding range of Ruby-throat and found itself with little option other than to get familiar with the locals!

When two different species successfully produce hybrid young, the outcome can be one or more of a variety of options. The individual can look more or less like one or other parent, with perhaps a few tell tale signs of something amiss; it can look like a 50:50 mix of the two parents, or it can even look completely different to both parents - and perhaps even resembling a third, unrelated, species. One thing that can be tell tale in hummingbirds comes as the result of a stuctural point. The glistening throat feathers of male hummingbirds are astonishingly eye-catching, but what you might be surprised to discover is that the feathers are actually black! The razzmatazz of a hummingbird is in fact caused, very cleverly, by the refraction of light. Things get rather technical now and I suggest if you want to read more on this, you could try the Structural Coloration page on Wikipedia. Different species of hummingbird have different colors to their throats and this is achieved by having different structural arrangements to the feathers. Since this structural arrangement has to be very precise to ensure that the correct color is produced, it should follow that the genes of a hybrid may very well end up producing something inbetween the two parents - the end result of which can be a muddy brown. Though at least one person detected flashes of purple (= Black-chinned) in the throat of our bird, others only came away with a dull, brownish, reddish, purplish mess.

Another hummingbird - probably a Rufous - was reported to CMBO today, this time at West Deptford, so still more birds are appearing in New Jersey. Looking ahead to the weekend though, things don't look too good for these birds and all we can do is wish them a speedy southward journey - and soon. 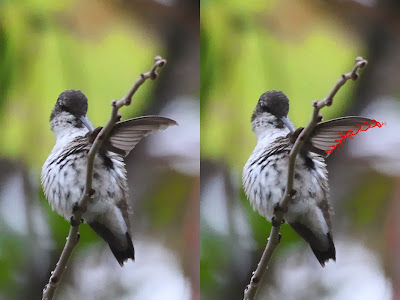 Structure, structure, structure is what you have to keep telling yourself with hummers. You might have to click on this picture to get a larger version up, but I have marked the primaries as in the last post. Take careful note of the shape of the outermost, tenth primary. In Black-chinned this primary should be roughly the same width as the ninth primary, in Ruby-throated it is much narrower - the evidence here is clear. There is, in fact, a slight chance that this bird may simply be an aberrant Ruby-throated rather than a hybrid so we may never get to the truth - and that is what birding is all about sometimes [photos by Mike Crewe]. 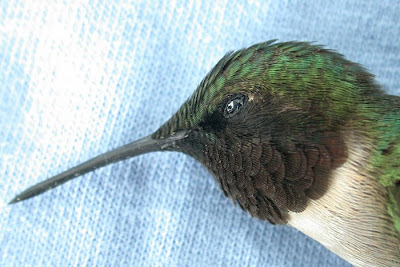 Structural color in hummingbirds - in this side photo, notice how the throat of this adult male Ruby-throated Hummingbird looks dull blackish-brown [photo by Mike Crewe]. 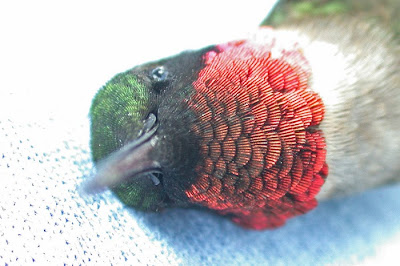 Turn on the lights! When seen from directly in front, the throat of the same male Ruby-throated Hummingbird shimmers with ruby red color. What is important to realise here is that directly in front is the view point of a female hummer when the male goes a-courting in the spring [photo by Mike Crewe].
Posted by Mike Crewe at 8:28 PM