At the risk of sounding repetitive, Cape May is simply the best... The past 24 hours has been truly awesome at Cape May and if you need proof, there can surely be no better testament than when the tired, jaded locals who have seen it all before are out on the streets at 11:30PM birdwatching (yes, truly!!). After such nocturnal activities, you would think that a good lie-in the next day is in order - not a bit of it. For the same tired and jaded birders who had seen it all before were up and out at 6:00AM and doing it all over again. Why? Because radar pictures of Cape May were lit up like a New Year's Day firework display as birds flooded through the area like an avian tsunami.

Everyone will have their own stories of today's events and everyone's stories will be very different, as there were birds throughout the area, no matter where you went. Birds just waiting to be watched and enjoyed, from minuscule, dusky Winter Wrens that played hide and seek in the ivy thickets behind the Northwood Center, to the four enormous American White Pelicans that soared across Cape Island mid-afternoon. No-one could possibly have seen all of the birds that passed our way today, for there was just too much to take in during a single day, so all the beaming faces will have tales of their own to relate; here's mine, in pictures.... 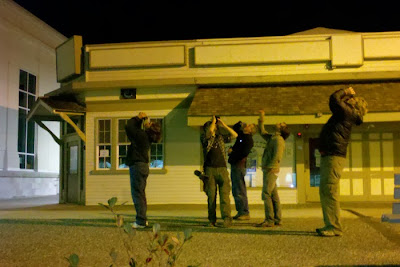 As so often happens, it all started in a bar! A hair-brained scheme to go and check if we could see any of the blips on the radar and turn them into birds. So many of our songbirds are nocturnal when it comes to migration and their movements take place unseen by us as we sleep in our beds. But coastal migratory hotspots like Cape May offer some unusual birding opportunities, one of them being the remarkable sight of night time migration, lit up by the street lights in town. A small group of us started with what we thought would be a brief vigil outside the Convention Center (and, perhaps more appropriately, outside Morrow's Nut House!!)... [photo by Mike Crewe]. 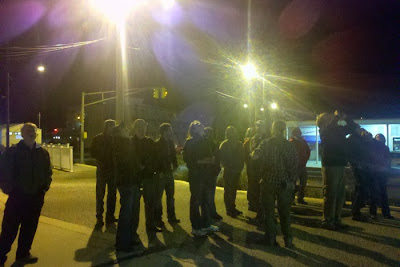 But before long, the number of watchers was entering double figures - including several passers-by! Timed counts indicated that an average of 20 birds per minute were visible passing over our tiny piece of sky - and this continued throughout the hour or so that we were there. Flight calls indicated that the vast majority were American Robins, Yellow-rumped Warblers and assorted sparrow species, but Killdeer, American Woodcock (announced to everyone within a five mile radius by a certain tall person!!), Red-breasted Merganser, Hermit Thrush, Great Blue Heron and Northern Flicker were also in the mix. The next day was clearly going to produce something special [photo by Mike Crewe]. 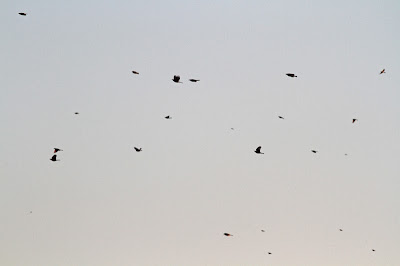 As today dawned, it was apparent that many thousands of American Robins were spread out from horizon to horizon, in many-layered, moving planes. Large numbers were teeming over our house and along Bayshore Road as we soon headed toward Cape May Point [photo by Mike Crewe]. 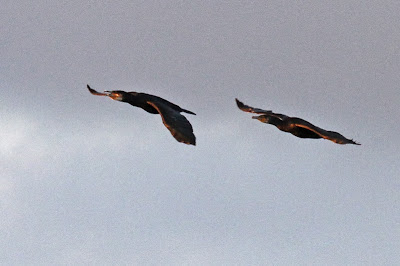 Cape May Point itself focuses and concentrates birds by its geography. As birds reach land's end, they head west along the tip, until they run out of land again. Then its time to make the decision - to cross the bay, or head back north and wait until dark again... Standing at the point gives a great opportunity to watch this focus of landbirds, while also giving opportunities to watch what is ferrying up and down Delaware Bay. Our arrival at the point was soon marked by these two Great Cormorants that were heading back out toward the open ocean [photo by Mike Crewe]. 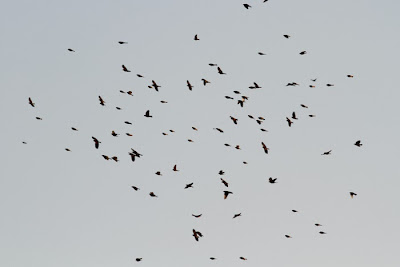 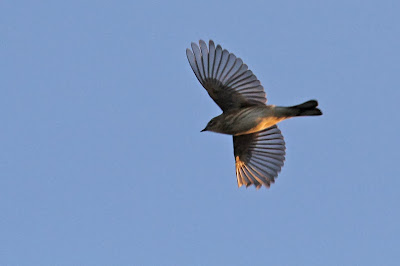 The tumbling balls of blackbirds were interspersed with open waves of Yellow-rumped Warblers, some of which even started landing on the platform that we were viewing from... [photo by Mike Crewe]. 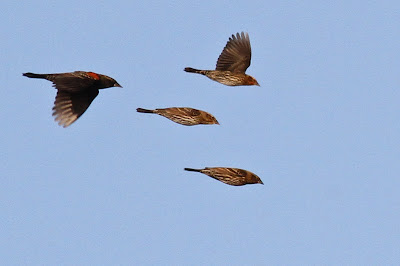 And as the light improved, the views improved too. Red-winged Blackbirds continued to swoosh past us and better light meant more opportunity to compare the streaky females with the red and black males [photo by Mike Crewe]. 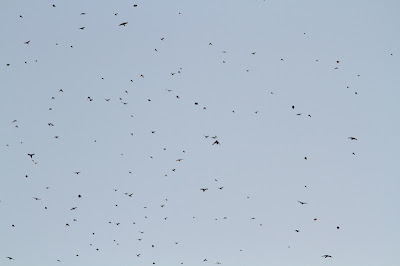 And still the birds came... A great gathering of Common Grackles hurtled toward the point and filled the skies with their noisy calls for several minutes [photo by Mike Crewe]. 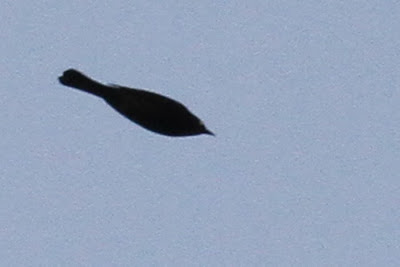 Such large gatherings of blackbirds and grackles need to be sifted through carefully for the ones that look a little different. Picking out Rusty Blackbirds from the feathered throng is not easy, but look for the different combination of structural points - a longer tail than a Red-wing, but shorter than a Common Grackle, a spike-like bill and - just visible on this one - a pale eye [photo by Mike Crewe]. 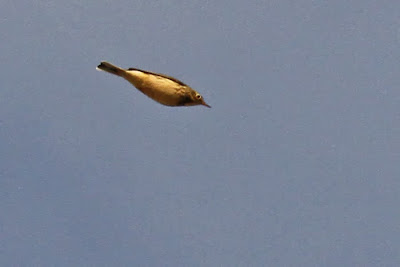 Another species that rushed all too quickly through Cape May Point today was American Pipit. This species finds little habitat to its liking in the county and is most often seen (and heard) as it passes overhead. But birds do pause and even spend much of the winter here and can be looked for in open, grassy areas, such as sod farms and airfields. Note this bird's long-tailed, slender appearance, heavily streaked chest, pale belly and clean eyering [photo by Mike Crewe]. 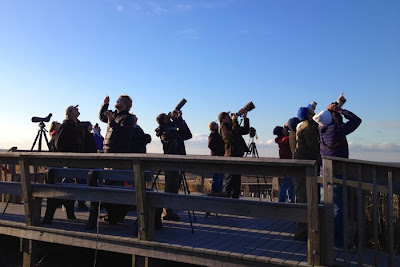 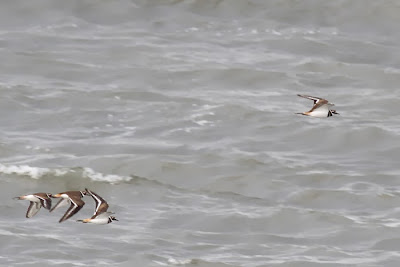 With our vantage point providing views over the bay, we could witness parties of shorebirds scuttling along the coast, including a number of Killdeers, with their distinctive combination of narrow, white wingbars and orange rumps [photo by Mike Crewe]. 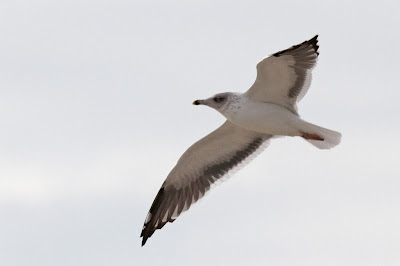 As an added bonus, at least three adult Lesser Black-backed Gulls were on the beach nearby. Note the heavily streaked head which readily distinguishes this species from Great Black-backed Gull during the non-breeding season [photo by Mike Crewe]. 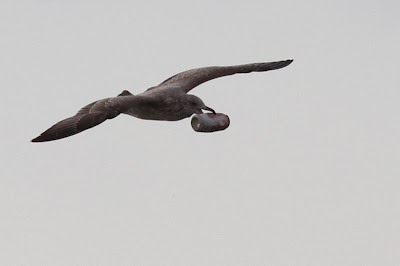 Though we had a certain amount of fun watching this young Herring Gull try to open this beer can up like a clam by dropping it from a great height, it is nevertheless sobering to reflect on just how many birds get injured by people who think that it's OK to litter Cape May simply because of laziness and lack of respect for others [photo by Mike Crewe].

As the morning 'rush-hour' of birds began to subside, we decided to tour the area and see how many bird species we could tally for the day - without going too crazy. We limited ourselves to the area south of the Cape May canal and headed to Higbee Beach, where birds were literally carpeting the ground in places. Here in the parking lot, Yellow-rumped Warbler, Chipping, White-throated and Song Sparrows and Dark-eyed Junco share a watering hole [photo by Mike Crewe]. 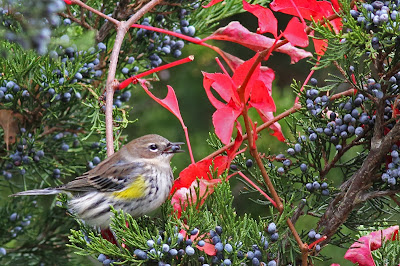 Perhaps an iconic image of the day - a Yellow-rumped Warbler stocks up on juniper berries in a landscape stained with brilliant scarlet by the leaves of Virginia Creeper [photo by Mike Crewe]. 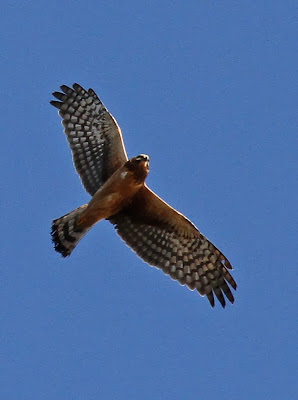 Meanwhile, down at the Hawkwatch Platform - Northern Harriers were queuing up to be counted as they scoured the cattail marsh for lunch [photo by Mike Crewe]. 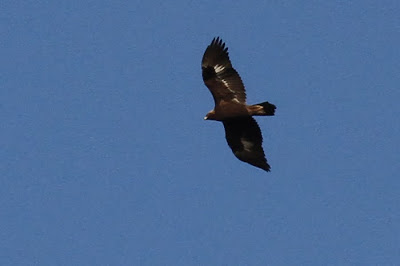 Choosing 'bird of the day' today was nigh on impossible, there was just too many candidates of impeccable quality. For sheer power and presence though, Golden Eagle must surely have been in the top three - especially as a total of 10 birds was counted at the Hawkwatch. This one is the second of two that we found today [photo by Mike Crewe]. 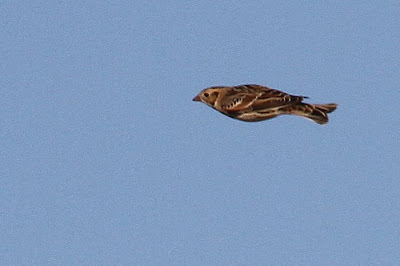 Also high on the list of nice finds today was this Lapland Longspur, that did a complete circuit around us at South Cape May beach in the afternoon. Note the chestnut greater wing coverts and dark corners to the ear coverts. These birds are most readily picked up by their distinctive, triple-note flight call, mixed in with a rather sad-sounding 'pleu' note [photo by Mike Crewe]. 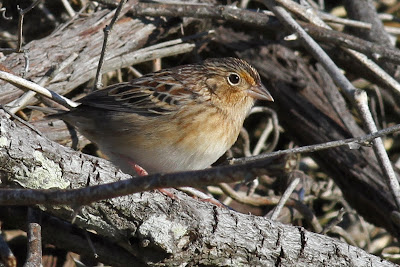 Perhaps our nicest find of the day was this Grasshopper Sparrow, that showed unusually well in the large brush pile on the south side of Bunker Pond; another was also found today at the TNC's Cape Island Preserve. Note the plain orange face with pale eyering, but no eyestripe [photo by Mike Crewe]. 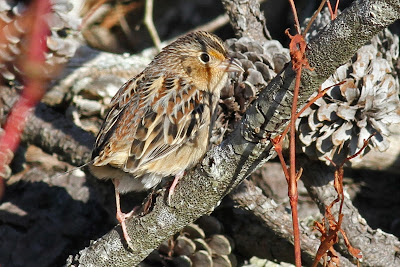 It's from behind that Grasshopper Sparrows truly look spectacular, with an amazing combination of markings and a full palette of colors. This bird is almost always impossibly skulking away from the breeding grounds but, just occasionally, one decides to buck the trend and perform for the crowd [photo by Mike Crewe]. 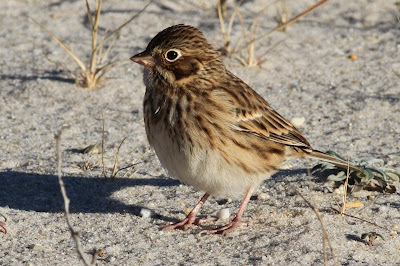 Not a rare bird, but one that can be hard to photograph well, Vesper Sparrows were much in evidence today with up to nine reported from the Magnesite Plant, four at the state park and others at Higbee Beach and The Beanery [photo by Mike Crewe]. 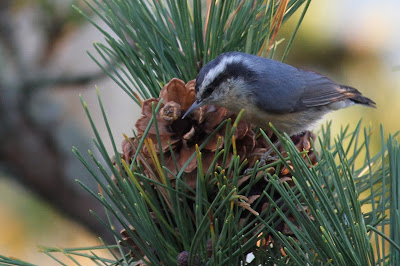 As our day began to draw to a close, we finally put in a little more effort to add a few extra birds. Crawling round the streets of Cape May Point looking for Tufted Titmouse (we never did find one!) we chanced across this Red-breasted Nuthatch. This was our first of this species for the fall and was in marked contrast to last year when we had a huge invasion of these birds as they headed south from the northern forests to find food [photo by Mike Crewe]. 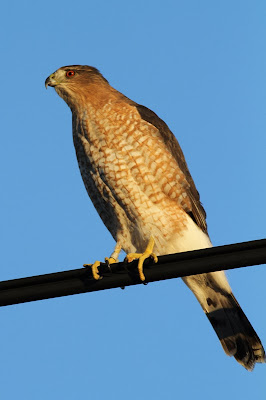 As well as visitors, we enjoyed the locals too. This adult Cooper's Hawk has become a regular fixture around Cape May Point, where it seems to have become more tolerant of close human presence and often allows close approach. You can bet that it ate well today!! [photo by Mike Crewe]. 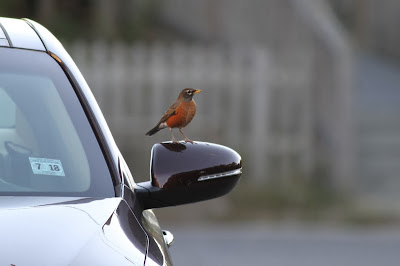 As if you needed confirmation that birds were pretty much everywhere around Cape May Point today - here's a chirpy American Robin looking both ways before crossing the road [photo by Mike Crewe]. 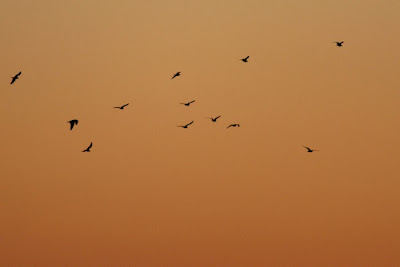 For the perfect day, always finish as you began. The day had actually started very spectacularly with a partial solar eclipse, right after sunrise, but the wonderful sunset that we experienced was well up to standard too, and a fitting backdrop to watch the gulls go to roost at the end of a perfect day. Oh, and our total for our casual jaunt around the point? A respectable 112 species, the grand finale being two Short-eared Owls and a Long-eared Owl heading out to continue their southward journey. [Photo by Mike Crewe].

By the time you read this, tomorrow will be upon us and another day of Cape May Magic will be under way. November is a very special time at Cape May and if you haven't given it a try before, maybe this year is the time...