November, as I am sure I have said before, is a great time to be out and about in Cape May. It's a great time of change and a time that brings unexpected bonuses for the birdwatcher. Nights continue to get colder, frosts gradually become more frequent and the flaming sunsets of sweltering summer are slowly replaced by the pastel, cool colors of winter evenings. If you are out and about just after sunset, look toward the east and watch for the whirring, plump forms of American Woodcock, hastening out of the woods to feed in wet meadows. Keep an ear out too for the distant calls of Snow Geese, for it won't be long before they are heading south overhead. Last night, my departure from the Northwood Center was accompanied by the calls of several Great Blue Herons as they spiralled upward from the shrubby edges of Lake Lily and set their sights on Delaware, and beyond.

Evenings in November are wonderful, but dawns are pretty good too, as great planes of American Robins stretch out across the sky and Hermit Thrushes bumble about in the leaf litter. In between those chilly dawns and pastel sunsets, there's the sheer enjoyment of just being out and about, and birding Cape May. Good birds continue to pass our way and high on the list of priorities here at the moment for most birders is the gathering flock of Snow Buntings at South Cape May Beach. Starting with just one or two birds, the flock has slowly but steadily built up to a peak so far of around 63 birds. Such flocks are always worth checking for other species and the last two days have seen at least one Lapland Longspur hanging out with the flock. If you visit the beach to the south of TNC's South Cape May Meadows, keep an eye out too for the Short-eared Owl that has been seen intermittently there.

This weekend could see a new record set at the Hawkwatch too - so if you are wondering what to do on Saturday or Sunday, you could be present when Tom Reed hits the jackpot. Currently, 38 Golden Eagles have been recorded at the Hawkwatch this season which equals the record set in 1996. There's still more time to get that elusive 39th bird and the weather this weekend looks as though it could provide Tom with that bird. This past week also saw the appearance of a Rough-legged Hawk on the Hawkwatch totals - given that this species winters in small numbers most years in the north of the county, it is perhaps surprising just how rare this species is at Cape May Point. Indeed, this is the first Rough-leg to be recorded at the Hawkwatch since 2008 and many of us 'locals' still need the bird for our 'south of the canal' lists. Here's hoping this bird is the first of several - you never know.

Other good birds this week have included a Nashville Warbler at Higbee Beach and Northern Parula at The Beanery on 19th, a day in which there was a pretty spectacular arrival of American Robins around the point. This arrival was also accompanied by a good number of Fox and Chipping Sparrows, Dark-eyed Juncos and American Goldfinches. The duck show at the point continues to build nicely, with a number of Hooded Mergansers and Buffleheads now showing up. Michael O'Brien reported four Eurasian Wigeon in the state park today (two female, two male) which should stay around for a while, but an American Moorhen on Lake Lily on 15th hasn't been reported again. The Avalon Seawatch is starting to turn up a good number of Common Eiders and is well worth a visit this weekend - a Red-necked Grebe was noted on 21st too.

Robin-fest! American Robins swarmed across Cape May Point this week and provided some great photo opportunities. Great variety exists in the overall saturation of colors in American Robins with, generally, a cline from the richest, darkest birds in the north-east to the palest ones in the south-west and down into Mexico. Though several races have been described, it is not possible to say exactly where most of them end and another starts. However, many birds in the recent arrival had jet black heads, heavily-streaked throats and deeper rufous underparts, typical of birds found in north-eastern Canada [photo by Mike Crewe]. 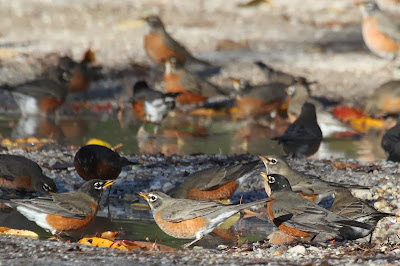 More American Robins, supping up before heading on south [photo by Mike Crewe]. 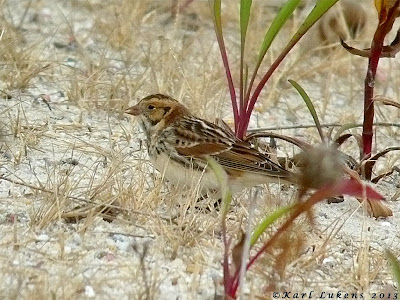 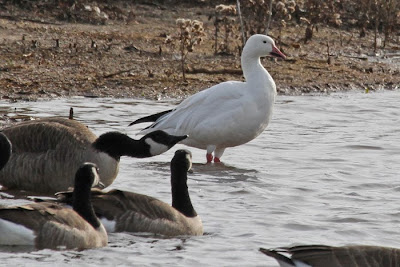 This small goose put in a brief appearance at The Meadows on 15th and raised hopes of a Ross's Goose. However, a quick look at the bill reveals this to be a Lesser Snow Goose - note the black 'smile' on the cutting edge of the bill. There is only one species of Snow Goose but it comes in two sizes; the vast majority of birds that winter on the Atlantic seaboard of the USA are so-called Greater Snow Geese, which are bigger and relatively longer-billed than this bird. Lessers mostly winter in the south-western USA [photo by Mike Crewe]. 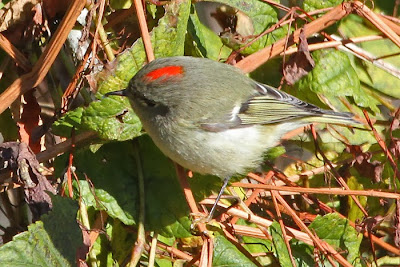 Sometimes birding just makes you see red! The brilliant scarlet head patch that gives the Ruby-crowned Kinglet its name is often well hidden by overlapping green feathers and thus very hard to see. Just occasionally you will get a feisty bird flaring its crown feathers to good effect, but this bird showed its red patch the whole time I was watching it and I came to the conclusion that there were actually some green feathers missing [photo by Mike Crewe].
Posted by Mike Crewe at 10:15 PM