Sometimes it's necessary to keep an eye on more than just local conditions to keep up with what's happening in the birding world and certainly keeping an eye on reports in eBird can be a useful way to plan ahead for your days in the field. A quick trawl through more recent sightings in New Jersey will quickly reveal one thing that is bound to get you ready to head out into the cold - it looks mighty suspiciously as though we might just be able to conjure up a Snowy Owl for Thanksgiving!

A quick look at eBird data shows that there has been a number of Snowy Owls reported from the North-east over the past week and it can surely only be a matter of time before one puts in an appearance at a beach near you. With two at Sandy Hook and singles reported from Barnegat and Stone Harbor, most birds have predictably been along the shore, but one was well inland (though close to the river) at National Park in Gloucester County too. At least two birds have also already made it to the south of us, with singles at Dover Air Force base and Assateague Island, while the coastline in New York and New England is lighting up with reports. The weather looks pretty hideous for tomorrow, but after that, it would be great to get every one out and checking for these fabulous creatures.

Where to look? Well, Snowy Owls are creatures of the high Arctic, well north of the treeline and even in winter they prefer to hang out in areas of flat, open expanse. Undisturbed coastal habitats (as rare as hen's teeth in NJ I know!!) are certainly favored, but further inland, open grasslands and even flat, agricultural lands may attract birds. With no snow around to disguise them, a large white lump in a field or on a dune is pretty easy to pick out so wrap up warm, pick up your binoculars and go for a walk - and don't forget to report your sightings!

Note: Do bear in mind that Snowy Owls are very vulnerable to disturbance and birds that wander well south of their normal range may well be underfed and desperately in search of a meal. Please keep a respectful distance from the birds and allow them to go about their lives. At present, birds seem to be moving through quite quickly, with most birds moving on after just a day or two - perhaps because they haven't found ideal conditions yet. With this in mind, the presence of some birds may best be kept quiet until they look more settled. Once settled, Snowies can become relatively habituated to people and even move into towns to feed. Once this happens, it can be much easier for news to be spread and birds to be enjoyed by all. It does look as though more birds will come, so just be patient, keep an eye out and you might just find yourself turning that tatty, white, plastic bag into something far more interesting... 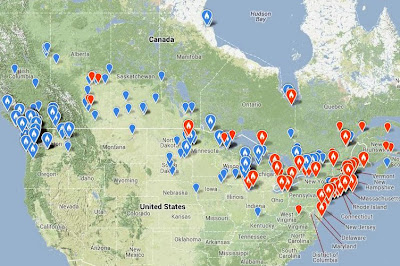 A look at eBird data maps can be a great way to get a feel for what is happening, especially regarding irruptive, Arctic and Boreal species. This map shows reported sightings of Snowy Owls for August to November in 2012 (blue pins) and 2013 (red pins). What is immediately apparent here is that the Northwest had the lion's share of birds in 2012 while in 2013 it is the turn of the Northeast. It is likely that the 2012 and 2013 movements involve birds from different parts of the range and movements may well be due to localized food shortages. Conversely, movements such as this can also occur after a very good breeding season, causing a temporary 'overstocking' of birds and a need for at least some to move elsewhere to find food. Data from eBird; map copyright of Google. 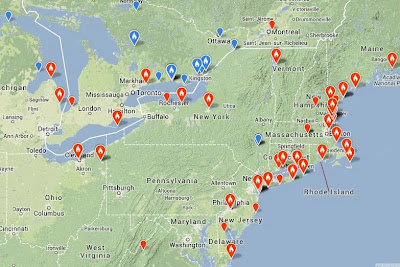 Homing in a little closer on the Northeast, it is clear to see that the vast majority of Snowy Owl sightings have come from the coastal strip. While there might be at least some observer bias in this, it seems likely that birds are genuinely hugging the coast and the Jersey shore offers plenty of opportunity to find more. Data from eBird; map copyright of Google. 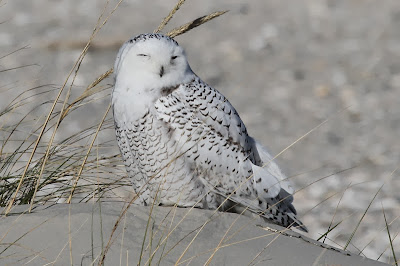 Snowy Owls are pretty easy to identify, though briefly seen Barn Owls can occasionally get the heart racing. Barn Owls, however, are clearly buffish in color above, while Snowies are almost all white with varying amounts of dark barring according to age and sex [photo by Mike Crewe]. 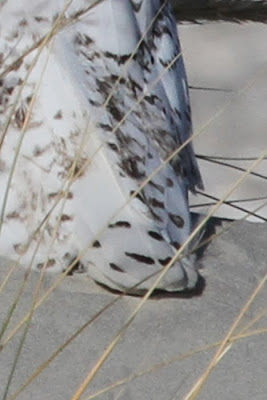 Adult male Snowy Owls are almost all white with very few marks, while first-winter females can be very heavily marked with dark, almost black bands. The rest, though, can be problematic and, though ageing and sexing Snowy Owls is often possible, many intermediate birds just don't give good enough view to be certain. A key place to start looking is the central tail feathers; check for complete versus broken bars, and count the number. The bird above had two broken bars and an incomplete third bar (hidden in the picture). This is consistent with a non-adult male [photo by Mike Crewe], 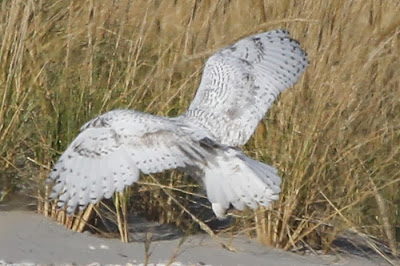 This bird is further confirmed as a male by the pure white outer two pairs of tail feathers. The narrowness of the bars (especially on the back and belly) and lack of markings on the primaries are all good for a young male but in the end I sort of got stuck at first-winter or second winter male for a variety of reasons. Knowing the age and sex of birds that make erratic southward movements such as these can be important in helping us to understand what is happening within the population; but if you can't get that critical wing or tail shot, don't worry, just enjoy the bird [photo by Mike Crewe].
Posted by Mike Crewe at 9:00 PM