A Tribute to The Master

We know why they come, they come for the awesome birdwatching. But how do they know to come to Cape May? Simple - because Pete Dunne told them to come. And if Pete Dunne tells you a place is good for birds, it's good for birds. I write this as an all too brief tribute to Pete, since he made the anouncement today that we all will make one day. Pete is stepping into new shoes next summer, not stepping down, or even aside, but fulfilling a different role that will allow him to continue to be the amazing ambassador that he has always been for Cape May Bird Observatory.

And one thing is for sure; the man who first snuck a picnic table into a corner of the state park and started counting raptors at Cape May Point way back in 1976 will be back at the platform, weaving his magic and reminding us all why we are here - and who got us here in the first place.

In the mean time, the hawks paid their own tribute to The Master today, for it was a truly spectacular Cape May morning that greeted the final Cape May Point walk of the season. Northwest winds rattled the window frames this morning and the temperature was set firmly on 32F as I left home, but the effort was worth it. American Goldfinches, American Robins, Brown-headed Cowbirds, Red-winged Blackbirds and American Pipits all featured strongly in a great flight over the point, while Northern Gannets and Ring-billed Gulls flooded into the bay. Smaller numbers of Killdeer were on the move and the odd Bonaparte's Gull joined forces with lingering Forster's Terns. Purple Finches and Fox Sparrows filtered into the area quietly and flocks of mixed sparrows and juncos graced many a side yard in the streets of Cape May Point.

But the real spectacle today came from the Red-tailed and Red-shouldered Hawks that swept effortlessly across the state park and tilted a wing toward The Master. 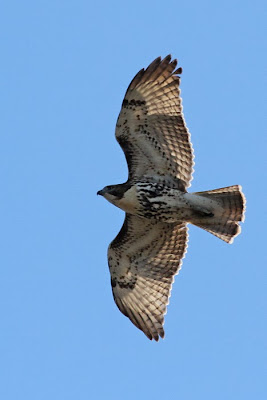 When Red-tailed Hawks are queueing up to be photographed it's only polite to oblige! Red-tails, like many Buteo species, are notoriously variable in plumage and not many have such a clear and obvious belly-band of streaks as this one [photo by Mike Crewe] 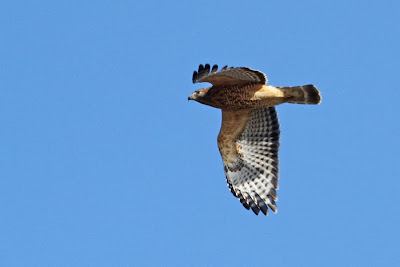 Who can resist a CMBO walk around Cape May Point when spectacularly-marked Red-shouldered Hawks are riding the wind right across Lighthouse Avenue... [photo by Mike Crewe]. 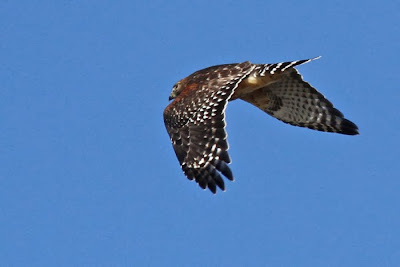 Red-shouldered Hawks are pretty special above too, though you don't often get the chance to see the upper side [photo by Mike Crewe] 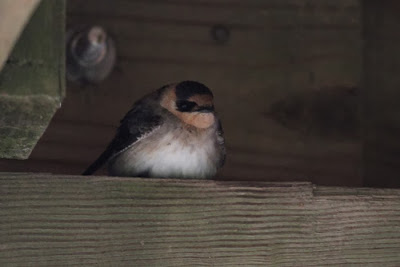 Huddling up against the cold, the now expected arrival of November Cave Swallows from the southwestern USA has seen a slow trickle of birds so far this year. But that's OK with us as these birds really seem to struggle here this late in the year and just what the species gets out of these late-season movements is hard to understand. Over the last few days, one or two birds have been resting under anything that might vaguely resemble a bridge it seems [photo by Mike Crewe]. 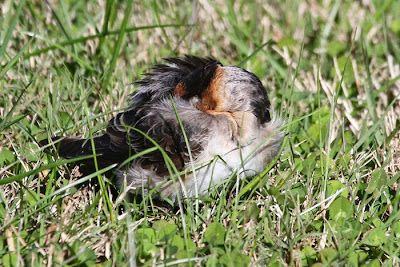 And some Cave Swallows just seem to stop where ever they can. This tired individual literally curled up and went to sleep on the grass right in front of the Hawkwatch Platform today. Though it clearly was cold and very tired, ten minutes later it was hawking insects with Tree Swallows over Bunker Pond and the rest seemed to have done it some good. Though perhaps it's a good job there are no feral cats at the state park... [photo by Mike Crewe] 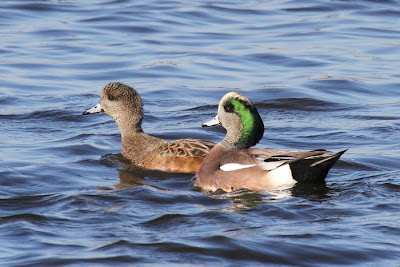 There's birds to be seen at Cape May, with a significant increase in duck numbers over the last 48 hours, like these really spiffy American Wigeon. What would Pete Dunne do tomorrow? He'd go birding... [photo by Mike Crewe]
Posted by Mike Crewe at 8:26 PM