Come November, come the ducks and with them, a whole new season of birding at Cape May. While the start of the build-up of ducks begins in late September, there's so much else going on at that time, that the arrival of the early birds almost goes un-noticed. Perhaps this is at least in part because many of these early season arrivals are still in their annoyingly boring, non-breeding plumages. A disheveled assemblage of motley ducks creeps into the area under cover of darkness and struggles to make its presence felt. Until, one day, they all seem to have thrown off their brown attire and replaced it with a multicolored coat of breeding finery.

Ducks are very much in evidence right now and will remain so for the next few months. And ducks have certainly featured in many a Cape May walk of late, so here's a few duck-related pictures to get you all fired up... 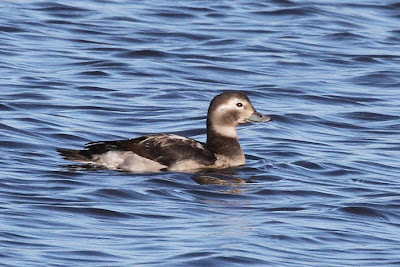 Ducks can and do turn up in odd places at this time of year, so do keep an eye out, especially during rough weather or foggy conditions if you live away from the coast. Wandering, or temporarily lost individuals can drop in on any convenient body of water, hang out for a while and then be on their way again. Though Cape May is pretty much all coastal, seaducks are still uncommon on bodies of freshwater here, so it was a nice surprise to see this juvenile male Long-tailed Duck drop in on Bunker Pond for a few minutes during this morning's CMBO walk [photo by Mike Crewe]. 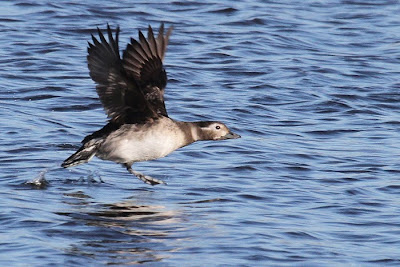 As I said, it was only a few minutes, then he was scuttling off across the water. Note here the all black wings with no wingbars or white patches - a classic feature of Long-tailed Duck [photo by Mike Crewe]. 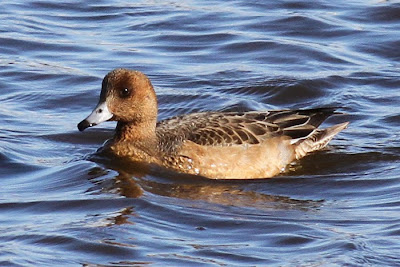 Ducks can throw you surprises too. This drab, female Eurasian Wigeon had been on the Cape May Point State Park ponds for several days before it started acting strangely. Actually, what it did was to start using the advertising call of a male Eurasian Wigeon! Once the bird came close enough for a really good look, it was possible to see just a single gray feather, right at the back of the flanks - see it? Yep, it's a young male, not in a hurry - it seems - to be coloring up just yet [photo by Mike Crewe]. 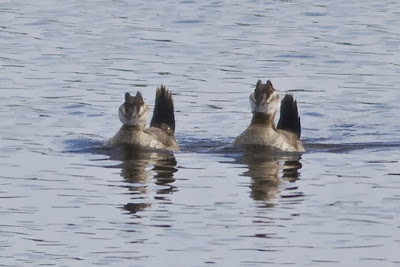 Talking of ducks throwing us surprises, three 1st-winter male Ruddy Ducks were hurling themselves full on into their bizarre courtship display, despite the lack of breeding plumage and a decided absence of bright blue bill. Ruddy Ducks are different to most other ducks in that they acquire breeding plumage - and thus do their courtship - in the spring, not the fall or winter. While still wearing their stripy-faced juvenile plumage we were certainly struck by the impression that they were wearing chipmunks as hats!!! [Photo by Sam Galick] 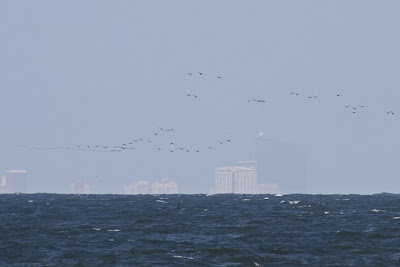 But if its migration spectacles that you still hanker for during the duck season, you could do little better than to head up to CMBO's Swarovski Optik-sponsored Seawatch at 7th Street in Avalon. Here, the duck watching really can be truly spectacular. Staring out across the water, the first sign of movement that you get is of squiggly lines in the sky, right in front of the Atlantic City casinos [photo by Mike Crewe]. 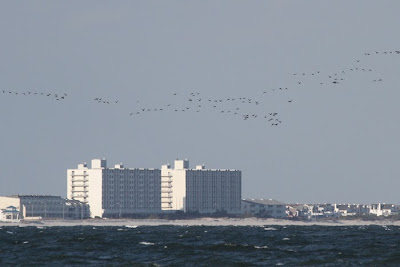 As the birds come closer, they pass the familiar backdrop of Sea Isle City [photo by Mike Crewe]. 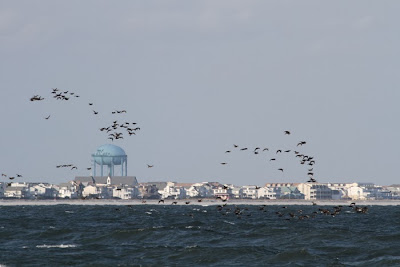 Closer still, waves of ducks - now identifiable as scoter by their all black appearance - swing to their left to hurl themselves around the jetty at Townsend's Inlet [photo by Mike Crewe]. 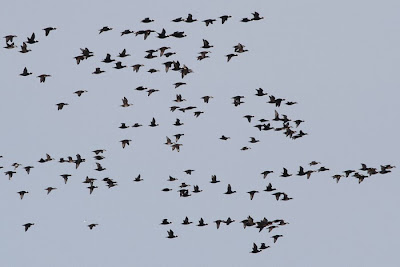 And now the ducks are passing right in front of you, sometimes seeming to fill the whole sky with their numbers [photo by Mike Crewe]. 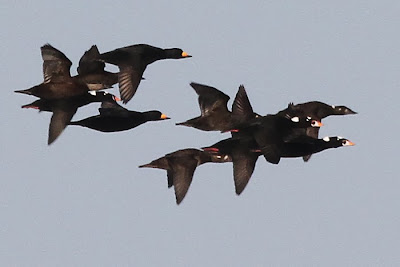 And now the real identification can be made - here males and females of both Surf and Black Scoters cluster together for point blank identifications. Compare the long head profile of the patchy-faced male Surfs with the ping pong ball heads of the male Blacks. Now see if you can match up the females with the males... [photo by Mike Crewe]. 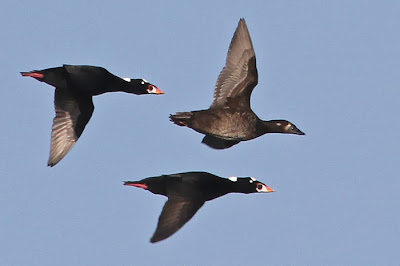 And if you miss the first line of ducks, there'll be another along in a minute. Indeed, day counts of over 20,000 scoter have been made on a number of days already this season at Avalon so if you haven't enjoyed the spectacle yet, now is the time - but wrap up warm and take plenty of hot coffee [photo by Mike Crewe]. 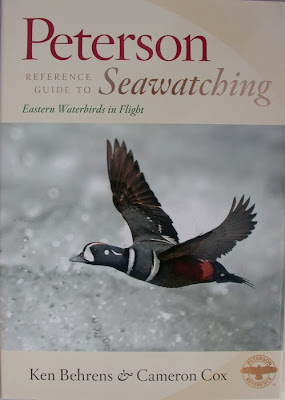 Just in case you need a little more help - and who doesn't?! The latest in the ever-growng line of Peterson Reference Guides is available now at our stores. If you can't get here to buy one, just pick up the phone and we can dispatch a copy to you. And if you are still not convinced at the wonders of a seawatch at Avalon, just flick through this book and see how many of the photos were taken right here at the Avalon Seawatch - and those who put in amazing amounts of volunteer time are rightfully recognized in the dedication... 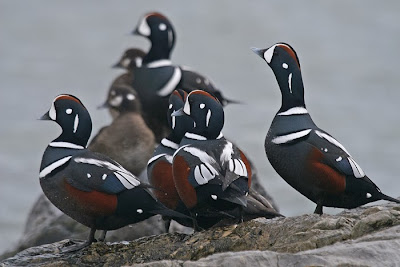 And finally.... the ultimate duck? All this talk of ducks reminds me that the CMBO Harlequin Romance trip to Barnegat Light will be happening on Saturday, December 7th and still has just a few places left. The Harlequin Ducks at this location are pretty much the most southerly, regularly-wintering birds here and this walk offers the very best opportunity to get up close and personal with this charismatic bird - call us now to reserve a space as numbers are limited [photo by Mike Crewe].
Posted by Mike Crewe at 5:43 PM