Evening-primrose brings life to the beach

Cape May's beautiful sandy beaches are much in demand by just about everyone, from sunworshippers to surfers to fishermen; we all want our time on the beach - and there's an awful lot of us, which puts a lot of pressure on the native wildlife which eeks out a living on the Atlantic shore.

One of the many plant species that is officially listed by NJDEP as imperiled in New Jersey because of its rarity, is Seaside Evening-primrose (Oenothera humifusa) but it's a plant that - thankfully - seems to be bucking the downward trend. Seaside Evening-primrose is actually quite widespread along the Cape May coastline, and this year seems to have been a particularly good year for this plant. So why am I mentioning it now? Well this unassuming little plant has really taken off on the South Cape May Beach this year and has provided some great wildlife viewing opportunities. This is a plant that is adapted to growing on coastal sands where, as well as providing us with attractive washes of pale yellow flowers through the late summer and fall months, it also provides food for a whole range of wildlife.

This last week, Seaside Evening-primrose has provided a link between the end of fall and the start of winter. Fall has not been in a hurry to depart Cape May this year, as brief waves of chilly weather have failed so far to get a real grip and sunny weather has prevailed. So much so that butterflies still feature on many of our late season walks and many plants have continued flowering well beyond the dates given for them in most flower books. A single, slender white spike of Nodding Ladies'-tresses, a late-flowering orchid, can still be seen at the Plover Ponds, while our friend the Seaside Evening-primrose continues to flower on the beach. Perhaps this extended season will also give a much needed boost to the worryingly low Monarch population this year and allow just a few more to make it through pupation and head south to Mexico.

The late flowering of the evening-primrose ties in with the late fall, as well as with the lateness of many insects this year, since quite a number of White-lined Sphinx caterpillars have been feeding on the succulent leaves and seed pods. And this brings us to the link with the start of winter, because my late lunchtime stroll on the beach found the evening-primrose center stage again as its pods were providing seeds for a party of Snow Buntings to eat. Connections like this are always interesting and help to show just how important the most insignificant species can turn out to be - lose the evening-primroses and the birds and insects might disappear too.

Though we still await November's traditional 'goody' in the bird line, there's still plenty of good birding to be had around Cape May. Another Golden Eagle showed up at The Beanery on Saturday, continuing an excellent fall for the species; small numbers of Snow Buntings are performing daily on the beaches at the point and the impressive scoter flight of the past couple of weeks still continues. Up at Avalon, the seawatch has been producing some excellent counts of Parasitic Jaegers and Northern Gannets, while a juvenile Brown Booby was reported from there on the morning of November 9th. Keep an eye out for Tundra Swans passing through now in small numbers and, with a northwesterly bringing a prediction of wintery rain on Tuesday, expect cold weather birding to be just around the corner. 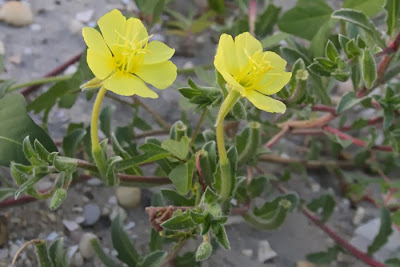 Seaside Evening-primrose is marvelously adapted to a life on the beach; its low, spreading habit resists wind in open, exposed places, while the thick covering of silky hairs on its leaves and stems protects it from dessication in a hot, windy, salt-laden environment [photo by Mike Crewe]. 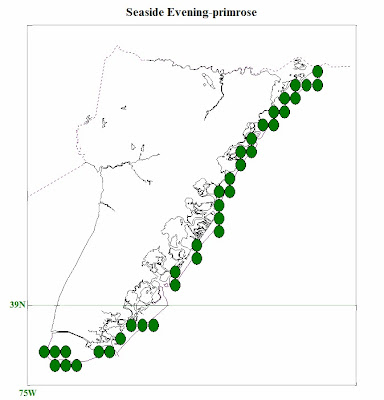 My plant survey work over the past two years has shown Seaside Evening-primrose to be widespread along the beachfronts and dunes of Cape May County. However, it remains vulnerable and could all too easily be lost if we don't remember to share our beaches. Notice the gaps in distribution along the barrier islands in what should be suitable habitat for the species; these are all places where beach raking is carried out from the low tide mark all the way back to the dunes. 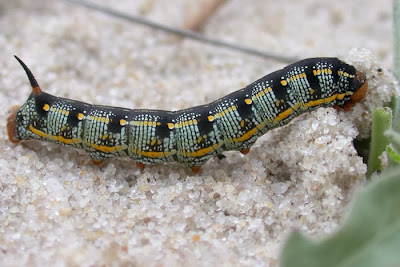 Caterpillars of most of the sphinx moths can be told by the prominent, hook-like spike on the rear end. White-lined Sphinxes are typical southern chancers, that head north in late summer and lay eggs on suitable larval host plants whenever and where ever the opportunity offers itself. The poor caterpillars on South Cape May Beach are eating plants so small that they can't even climb onto them and have to tolerate being sand-blasted while they munch. Some of these guys probably won't make it this late in the year, but a fresh influx of moths will arrive from the south next year [photo by Mike Crewe]. 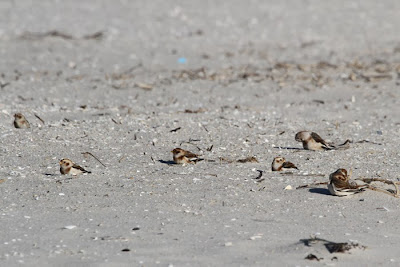 The first blizzard of winter - a party of Snow Buntings, hunkered down in footprints on the beach. Snow Buntings are highly active birds and flocks regularly erupt suddenly for no apparent reason. This is a defense strategy against predators, along the lines of 'a moving target is harder to hit'. In between feeding bouts, Snow Buntings often hunker down like this in open and exposed locations. They seem to do this during rest periods from eating, during which they spend time preening and probably digesting what they have just eaten. It is likely that resting in open areas like this gives them a good 360 degree view to keep an eye out for predators [photo by Mike Crewe]. 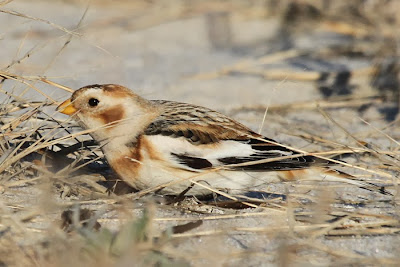 Snow Buntings can be hard to approach during their 'sitting out in the open' spells and if you want good views, it is always better to wait until they go back into feeding mode. Snow Buntings have very complex and variable plumage patterns and telling the age and sex of individual birds in the field can often be tricky. However, a bird with this much white in the wing is likely to be a male [photo by Mike Crewe]. 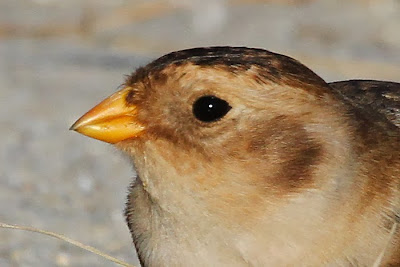 Snow Buntings have wonderful color tones in their faces, often carrying the burnished browns and buffs of fall well into the winter - and all topped off by that amazing orangey yellow bill [photo by Mike Crewe]. 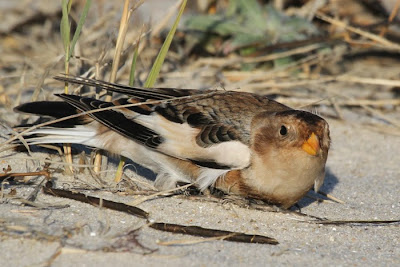 The crouching style and cryptic colors of Snow Buntings are typical of birds that spend time in open, exposed places and help to reduce the chance of detection by potential predators - and photographers too unfortunately! [Photo by Mike Crewe]
Posted by Mike Crewe at 11:07 PM