We all know that Cape May is all about the birds; the awesome spectacles of migration that we get through here spring and fall are certainly what bring people here in the first place. But part of what keeps people coming back to Cape May is, well, the people. The friendships that start between birders at Cape May can last a lifetime and there surely can be no better place to enjoy great birding and great cameraderie than the Cape May Point Hawkwatch Platform at the state park.

This last couple of days has certainly seen a dramatic fall off in numbers of visitors, as the season 'officially' ends after Autumn Weekend - or does it? Visitors certainly drift away, but there's still plenty of good birding to be had and there's still a great hardcore of locals, as well as visiting birders who stay to enjoy what nature decides to offer us through November.

So what of the people who are still here at Cape May? Well, here's just a few of them.... 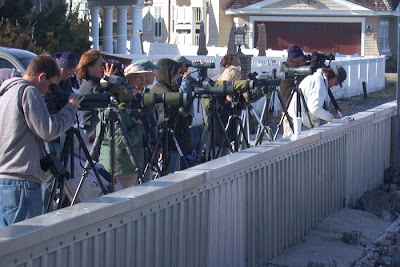 Don't believe that the birding ends when the birders go home. Late October sees the Avalon Seawatch only just warming up and numbers of ducks are likely to increase as we head into November. Tuesday saw an ever-growing clan of birders gathering at the intersection of 1st Avenue and 7th Street to watch a spectacular movement of birds, including over 50,000 scoter [photo by Mike Crewe]. 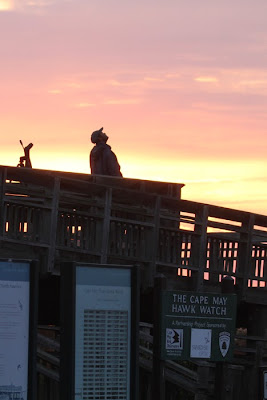 In contrast to the seawatch, the hawkwatch starts to wind down around now and the CMBO Hawk Counter can cut a lonely figure at times - though it's always nice to be out to enjoy another glowing Cape May sunrise [photo by Mike Crewe]. 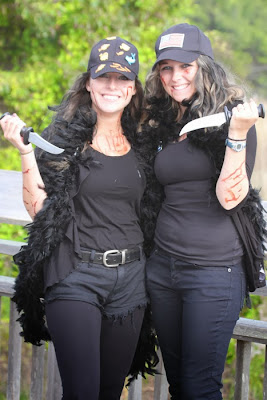 I guess a whole season at the hawkwatch can turn people a bit peculiar! The wonderful Emilys did us proud as Interpretive Naturalists throughout September and October, but turned into a murder of crows for Halloween!!! [Photo by Mike Crewe] 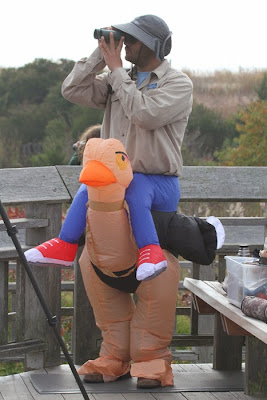 And, well, I guess a whole season as Hawk Counter can do strange things to a person too... [photo by Mike Crewe] 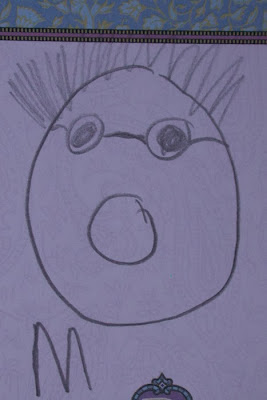 The Autumn Weekend gave some of us a great opportunity to engage with some of the very youngest birders in Cape May - the generation that holds the future of our environment in their hands. I was delighted to have young Sophia Nemeth draw a portrait of me during one of my Higbee Beach walks so, since I never seem to post pictures of myself - here's my portrait. Happy Halloween!! 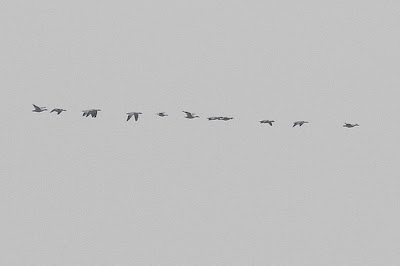 In case you think it's all over.... OK, not a spectacular shot, but we did get better looks through the scopes!! With a lot of squinting and much imagination, you might just be able to make out a Ross's Goose in the middle of this line of 11 Snow Geese which flew up the Delaware Bay today (hint: it's the little one in the middle!). Though it might seem odd, November is our best month for rarities at Cape May, so there's still plenty of good birding to be had - watch this space... [photo by Mike Crewe]
Posted by Mike Crewe at 5:09 PM