Cape May has birds - though one of our warblers is missing...

Now that we are in the final countdown for the awesome Cape May Autumn Weekend, it's great to be able to report that the weather forecast still looks pretty darned good for the coming few days; it's also great to be able to report that Cape May has birds. The radar for much of last night was showing a spectacular nocturnal movement of birds down the eastern seaboard of the USA; and with the movement continuing at dawn, it was clearly going to be a great day to be out in the field. I had time to squeeze in a quick run around the fields at Higbee Beach first thing, where Megan and I ran into some happy birders enjoying what seemed like a blizzard of Yellow-rumped Warblers, raining down from above and forging their way through the bushes and hedgelines. Around the fields, bundles of streaky brown sparrows scuttled for cover as we walked slowly along, giving us plenty of opportunity to get frustrated! Among the mass of Field, Swamp and White-throated Sparrows, we did chance across one Lincoln's Sparrow - never a common migrant here, as well as a super-blue male Indigo Bunting.

Late morning today was dominated by some fabulous raptor movements, in particular kettles of Turkey Vultures that have been bringing a number of Bald Eagles and at least one Golden Eagle to the point. A light morph Swainson's Hawk was also reported from Cape Island Preserve, a small property owned by The Nature Conservancy that can be accessed from the East end of Wilson Street, off Broadway in West Cape May. Being a light-plumaged bird, this is clearly not the Swainson's Hawk that was here last week, so chalk up another one for the point. The backbays are warming up in good time for our boat trips that will be taking place as part of the weekend festivities; up at the Wetlands Institute, up to eight Marbled Godwits have been roosting at high tide with Western Willets and Greater Yellowlegs, while a party of four Purple Sandpipers turned up at the Avalon Seawatch today - reminding us that the seawatch is well worth a visit right now, with over 20,000 scoter logged there on both of the last two days.

Just to show that it is not all laid out quite so easily for you, an elusive hummingbird has been lurking along Coral Avenue at Cape May Point for two days now and still not revealed its full identity. The mass of orange in its plumage shows it to be a Selasphorus hummingbird (sorry for the technical jargon!) which essentially means that it is either a Rufous or an Allen's - but we need super good views of the tail feathers to work out which one... Who's up to the challenge?!

So, why do I say one of our warblers is missing? Well, there can be no better indication of the sheer tenacity of migrant birds than when one survives being blown off course across an entire ocean. News that a Cape May Warbler has just been seen at the very northern tip of the British Isles, in the Shetland Islands, just shows what incredible survivors these birds are. We may have lost a warbler, but we are currently gaining birds from all points north - here comes the weekend!!! 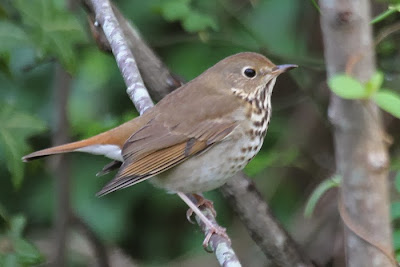 Appearing in a yard near you - Hermit Thrushes arrive late in Cape May and many stay for most of the winter. Look for these birds in the darker, shady recesses of your yard and expect to see them where there are plenty of berries to be eaten [photo by Mike Crewe]. 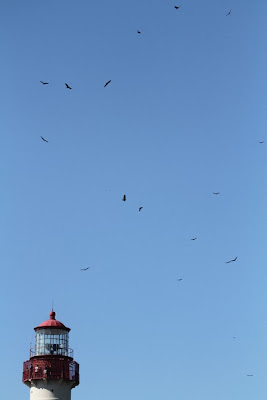 Appearing over the lighthouse right now! Iconic Cape May - a lighthouse, a bright blue sky with North-west wind - and a kettle of raptors on the move [photo by Mike Crewe]. 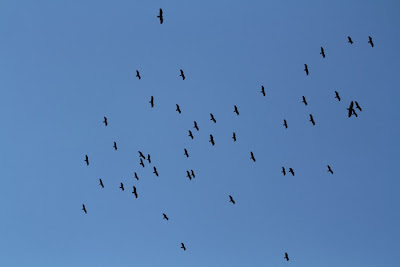 Appearing in the skies right overhead - though Turkey Vultures are common birds around here for most of the year, southerly movements of birds do occur at Cape May and can be pretty impressive at times. If you come across such groups of large, dark raptors, check through them carefully for something different... [photo by Mike Crewe]. 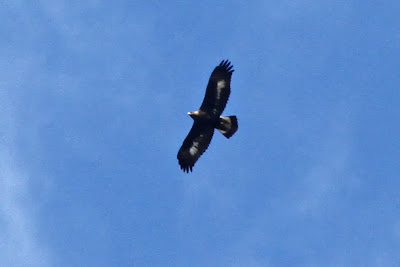 Appearing in a vulture kettle near you? There's something special about the appearance of a Golden Eagle over Cape May Point that certainly gets the pulse racing and gets birders out on the street. This bird was a very special one here as it was a new 'yard bird' for Bill and Edie Schuhl. Bill and Edie do staggering amounts of volunteering for CMBO, as well as for other organizations, and have been leaders in establishing prime wildlife habitat at the point. So it was with much pride that I was able to show them this bird and repay them in gold for some of their time - thanks guys! [Photo by Mike Crewe] 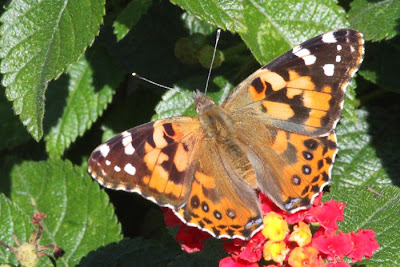 And finally, its been an interesting fall so far for Painted Lady butterflies; despite a very quiet year for this species here at Cape May, we are only just now seeing an interesting influx of these insects, which are most likely heading south to kick start another generation down in the Gulf of Mexico and get the ball rolling for next year. Painted Ladies have no overwintering survival strategy and the species survives by retreating south for the winter, from where future generations will eventually recolonize the north next year [photo by Mike Crewe].
Posted by Mike Crewe at 3:44 PM