Well, after suggesting a whole range of ideas for things to do indoors on a rainy day, luckily a lot of people ignored me and went outside! I say luckily, because Cape May has been over-flowing with birds this week and all it takes is a few extra layers of clothes and some hot coffee and the rewards are there to be enjoyed. The presence of so many birds may seem non-intuitive since it is reasonable to think that birds won't be migrating during such blustery conditions. However, when we get a north-easterly like we have just experienced (and are still experiencing as I write!) it is not unusual to find birds caught up in the weather pattern and finding themselves unceremonially dumped at Cape May Point. Some interesing nocturnal heron flights have been taking place this week and, this morning, at least 30 Black-crowned Night Herons were roosting in trees at Lake Lily, while a Least Bittern was reported from the South Cape May Meadows - the first of this rapidly declining species that I have heard of south of the canal this year. To witness the spectacle of heron and egret flight, I would suggest trying one of the Cape May Point dune crossovers at either dawn or dusk and just keep an eye on the sky.

Yesterday saw something of a 'Patagonia Picnic Table Effect' at The Meadows. It's a long story but essentially, a rare bird was once found at some picnic tables near Patagonia, Arizona; in the following days, birders travelling there to look for this bird, progressively found other rarities at the same site. There were no rarities as such found at the Meadows, but a nice run of birds was turned up by those seeking earlier finds. Michael O'Brien set the ball rolling with reports of a Long-billed Dowitcher, two Clay-colored Sparrows and a Nelson's Sparrow along the East Trail. Those heading out for these turned up Greater Scaup, 20+ Pectoral Sandpipers, single Baird's and White-rumped Sandpipers, two Wilson's Snipe and two Cliff Swallows - a pretty good list of birds! The hawkwatch has been quiet, as one might expect, but with a lot less rain so far today, American Kestrels, Merlins and Peregrines have been readily viewable. The Eurasian Wigeon remains on Bunker Pond and the House Sparrow flock in front of the Hawkwatch Platform currently holds Eastern Towhee, White-crowned Sparrow and a very obliging Dickcissel. Yesterday, Cox Hall Creek WMA was full of birds, including Scarlet Tanager, Rose-breasted Grosbeak and Baltimore Oriole.

Almost expected at this time of year, the Northwood Center is holding good numbers of warblers and other songbird migrants. I heard of a late Cape May Warbler today, while Nashville, Black-throated Blue and Black-throated Green Warblers are all still present among the parties of Blackpoll and Yellow-rumped Warblers, Golden-crowned and Ruby-crowned Kinglets and more. Both Winter and House Wrens have been at Northwood this week and a small influx of Brown Creepers took place mid-week.

The backbays have been interesting recently, at least in part due to the weather keeping water in the channels and providing some very high tides. It's been a good time to see Seaside Sparrows and both species of night heron out on the marshes, while a couple of late Whimbrels were reported today. What little habitat remains on the barrier islands is also worth checking - such as the small bird reserves at Stone Harbor, Avalon and Ocean City. 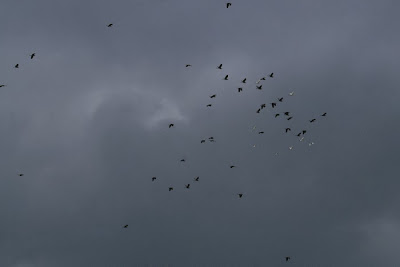 Heron migration is always spectacular to watch when these large birds are moving in good numbers. Here, part of a large flock of Great Egrets and Great Blue Herons heads out over Delaware Bay against a moody sky [photo by Mike Crewe]. 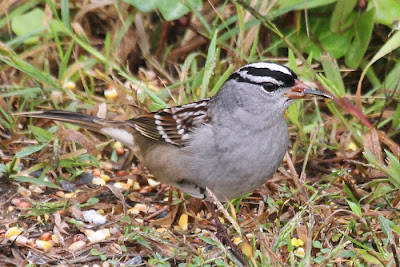 Sparrow flocks are worth studying during October and early November as a wide range of species will be passing through. This smart White-crowned Sparrow spent today feeding right in front of the Hawkwatch Platform [photo by Mike Crewe]. 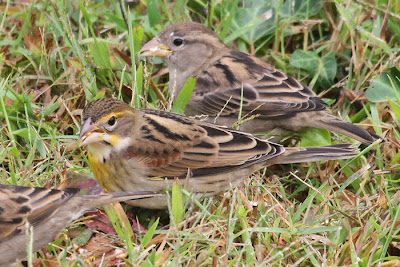 This Dickcissel also spent the day at the Hawkwatch. The similarity of feather colors and markings between Dickcissels and House Sparrows - shown here - is really remarkable, given that the two species are not that closely related to each other [photo by Mike Crewe]. 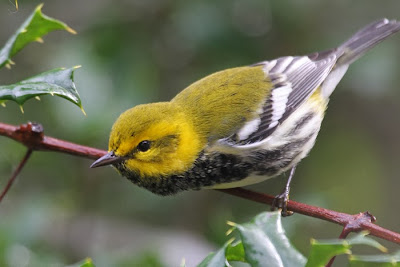 Despite the great birding to be had outside, work schedules dictated that I had much to do indoors today. Thankfully though, my old faithful window came up trumps and offered me this superb Black-throated Green Warbler - life can be tough sometimes! [Photo by Mike Crewe]


As an added incentive to be outside tomorrow, you can make your mark by paying a visit to the Hawkwatch Platform, for Sunday, October 13th will be the day that Cape May birders put in their effort for The Big Sit! This competition is an annual event run for fun, sponsored by Swarovski Optik and hosted by Birdwatcher's Digest. Cape May has a fine track record in this competition so come and check out how the list is going through the course of the day and, if you don't think you can contribute a bird to the list, how about some cookies or coffee?!!! See you at the platform....
Posted by Mike Crewe at 3:58 PM