From Big Sit to Big Fall.

As mentioned in an earlier post, last Sunday (13th) saw the annual Big Sit! event taking place across North America. Cape May has a proud history in this event and valiant efforts were made once again by Cape May's birders. It's fair to say, however, that this year saw the weather conspiring against Cape May getting a good total and, while watchers were present at the Hawkwatch Platform for some 23 hours on the day, the total of around 118 species is well below the figure hoped for. Of course, 118 species represents a great day in the field for most people, but we get a little spoilt here and, having achieved well into the 140s in the past, this year's count was a tad disappointing.

With the past week continuing to provide mediocre conditions for a Cape May bonanza, it was with great excitement that we headed out into the field this morning - for the weather conditions looked ideal. And ideal they proved to be! Late October looms upon us and the desire to be outside is getting harder and harder to resist. As I sit typing with the window ajar, there's a cacophony of White-throated Sparrow, Eastern Towhee, Eastern Phoebe, Golden-crowned Kinglet and Yellow-rumped Warbler calls going on, tempting me to go and investigate.

A quick scout around the Northwood Center premises this morning, followed by a quick walk to the end of the road and back revealed even more birds this morning. Dominant among the busily feeding masses were White-throated Sparrows and Ruby-crowned Kinglets; the former kicking up the leaf litter, the latter flitting through every cedar along the street. Among them was so much more: Field, Chipping, White-crowned, Swamp and Song Sparrows, Eastern Towhees, Dark-eyed Juncos, Winter and House Wrens, Eastern Phoebes, Hermit Thrushes, Brown Thrashers and Gray Catbirds. Even warblers were well represented with seven species being logged, while several Brown Creepers worked the tree trunks along with Yellow-bellied Sapsuckers and Downy Woodpeckers. Unfortunately, the north-west winds that had brought us these birds were soon deflected by south-easterlies, swirling off a weather system that brought us some light drizzle and put paid to a good raptor flight. But, tomorrow looks good too, with north-west winds set to return so, well, you know what to do - see you in Cape May tomorrow, because there will be birds!!

Typically on a day when there is a good number of birds around, little in the way of real rarities was reported. However, I did hear of a Swainson's Hawk which was hanging out beside Ocean Drive, just south of the Grassy Sound toll bridge, south of Nummy's Island. If north-west winds whip up again tomorrow, we could see that bird appearing at Cape May Point... 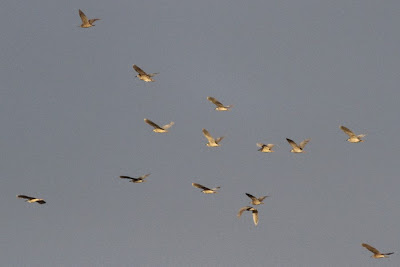 Black-crowned Night Herons circle Cape May Point as the sun sets on another fun Big Sit! at the Cape May Hawkwatch Platform [photo by Mike Crewe]. 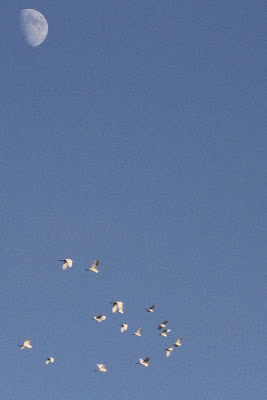 As the sun disappears, we are left to watch birds drift pass a rising moon. Here, Great and Snowy Egrets head out over Delaware Bay, part of a wonderul movement of herons and egrets that took place at Cape May Point on October 13th [photo by Mike Crewe]. 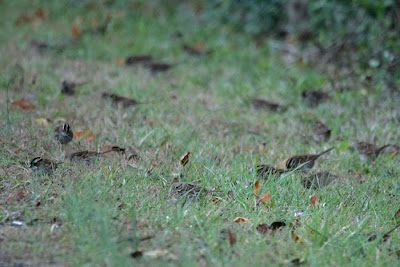 For the best experiences of Cape May birding, you need to be out before the cars and dog walkers force tired and hungry migrants off the roadsides. Grassy edges with leaf litter were alive with activity early this morning as mixed flocks of sparrows smothered the ground [photo by Mike Crewe]. 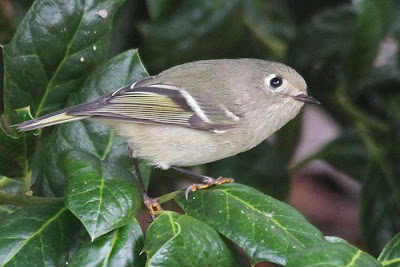 While sparrows did the ground work, Ruby-crowned Kinglets were hyperactive in seemingly every tree at the point today [photo by Mike Crewe]. 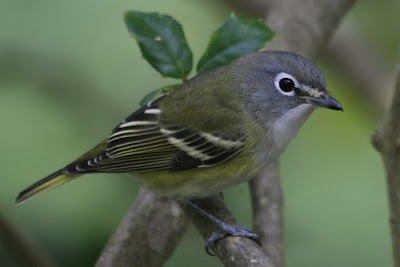 Just one day later than last year, a Blue-headed Vireo popped up right outside my office window. Others were reported from Cape May Point today [photo by Mke Crewe]. 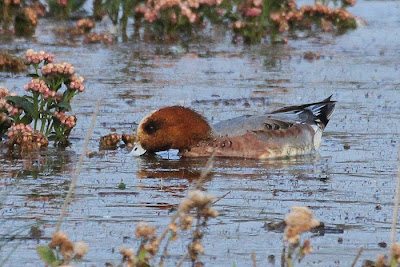 And if you are in town this weekend, don't forget the old regulars - our male Eurasian Wigeon continues to commute between the state park and TNC's South Cape May Meadows, with the latter mostly being favored of late [photo by Mike Crewe].
Posted by Mike Crewe at 2:38 PM