So many places, so little time!

If you are down in Cape May for a week, the sheer volume of birds and other wildlife, and the number of locations to visit can almost seem overwhelming. This last few days has certainly been a case in point; wherever you choose to go right now, you are likely to have great wildlife experiences - but you can bet there will be something equally good going on elsewhere. It's a tough decision. With a front heading our way, bringing the possibility of some rain over the next couple of days, there may be time to reflect, catch up and plan a course of action for later in the week. The good news is that north-west winds are forecast for Wednesday and Thursday so it could be a great week ahead.

So where are the hotspots right now? Well you can plan a day like this: start at either Higbee Beach or at one of the dune crossovers around Cape May Point. Both locations are ideal for watching migrant birds early in the morning; at Higbee Beach, birds are mostly night migrants reorienting themselves to find suitable habitat in which they can spend the day. At the point, birds are mostly species that are happy to continue moving during the day. At the former, expect warblers, vireos and flickers; at the latter, expect blackbirds, finches and flickers. As the day warms up, it can be a good move to head for the Hawkwatch Platform at Cape May Point State Park. If raptors are moving, mid morning to early afternoon is usually peak time - though falcons also push through in late afternoon too. Late afternoon can be spent around the Northwood Center for warblers - and a good place to find out what is being seen elsehwere too. Early evening is a good time to visit The Meadows off Sunset Boulevard for a chance of Sora and a good mix of ducks and other waterbirds.

Having crammed all that into your day, you somehow also have to remember not to miss Nummy's Island and Stone Harbor Point for shorebirds (still Piping Plovers and Western Sandpipers at the latter), Cox Hall Creek WMA for warblers, sparrows and much more, a visit to the Avalon Seawatch, a boat trip out on the back bays..... oh yes, and you need to find time to eat and sleep too!!!

One thing is for sure, there's a lot of happy faces around Cape May right now! 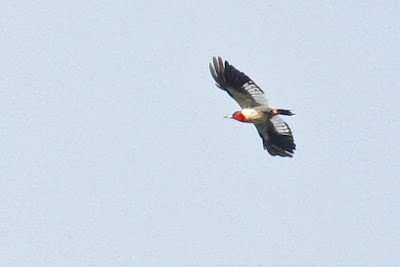 Higbee Dike is perhaps something of an acquired taste, as rapidly passing birds that don't stay in view for long are not everyone's favorite thing. But the experience of being there on a good flight is certainly something different and, even if you can't identify everything that whizzes by, it's still a great thing to do at least once. The dike itself is a bit of a monster to take on, but there is a readily accessible wooden platform from which you can get some great moments. This Red-headed Woodpecker was one of my own highlights on the dike a few days ago [photo by Mike Crewe]. 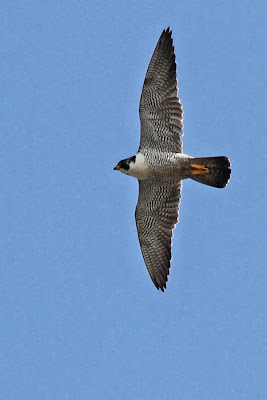 Have you had your fill of Peregrines for the year yet? If not, you probably weren't at the Cape May Hawkwatch Platform yesterday. Peregrines put on a fabulous show with this year's counter, Tom Reed, totalling 173 Peregrines past the platform, including this superb adult that got the oohhs and ahhs going! [Photo by Mike Crewe] 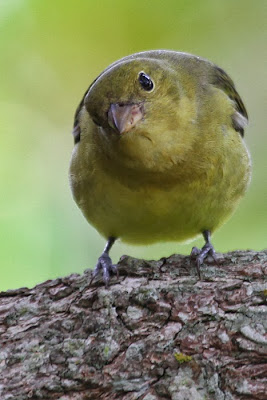 The trees around CMBO's Northwood Center at the north end of Lake Lily have become justly famous for producing great birding around this time of year. Much of the activity centers around the Siberian Elms, which harbor huge numbers of aphids on their bark. These insects are moving in to overwinter in the cracks of the deeply fissured bark and the birds have been quick to work out that there is a quick meal to be had. Siberian Elms have been planted at a number of locations around Cape May Point and those along East Lake Drive and Coral Avenue are generally very good also. Indeed, the original 'Magic Tree' is a Siberian Elm, standing in Bill and Edie Schuhl's garden on the corner of Cambridge and Coral and always worth more than a passing glimpse at this time of year. The Scarlet Tanager above chose to peer in through my office window at the Northwood Center a couple of days ago, reminding me that it really was time to get back into the field... [photo by Mike Crewe]. 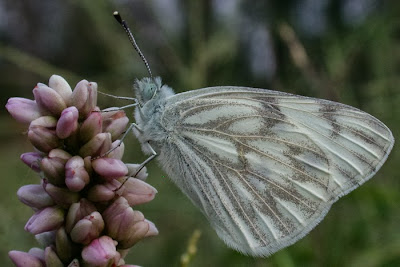 Even at the height of migration, Cape May is not just about the birds. Yesterday, Will Kerling and Dave Amadio chanced across this Checkered White at the Rea Farm and set off a mini twitch. Though this species was once fairly common in the east, it has declined greatly and it has been many years since this species was reported around Cape May. Checkered Whites are abundant further west in the US and its decline in the east may be due to a loss of farmland to development. However, it is also speculated that the species has never been common in the east and its presence here is simply a result of occasional influxes which result in relatively short-lived colonies becoming established [photo by Mike Crewe].
Posted by Mike Crewe at 11:22 AM