As if by clockwork, the birds seemed to know that September is over and October has began. And this morning The Switch took place; it actually caught most of us off guard. The weather forecast certainly didn't look overly promising, with winds in the 'wrong' quarter, but we awoke to the sound of birds this morning - birds chirping and tweeting overhead.

On our regular Wednesday morning walk at the state park, it soon became apparent that The Switch had taken place. Gone were the American Redstarts and other late September birds and in their place was the first major push of Yellow-rumped Warblers. Other early October birds were apparent too: a good number of Indigo Buntings and Savannah Sparrows were around, several Eastern Phoebes and small waves of Northern Flickers and Blue Jays. A number of Yellow-bellied Sapsuckers were reported today too, and one or two American Pipits were drifting along the dune line. All signs of The Switch; signs that October is upon us and, while it may be a sign that the warblers will be on the wane, it is also an indication of greater numbers of birds, for October has a tendency to send us great wadges of sparrows, raptors, ducks and more.

And of course, this increase in birds is the very reason that our Autumn Weekend will take place at the end of this month - a whole series of walks, talks and other fun events, as well as all the entertainment at the convention center in town. Many birds will pass our way between now and then, but the end of October is almost certain to be a great time to be birding in Cape May - check out details of our autumn weekend by clicking here, and get signed up to be part of the fun!! 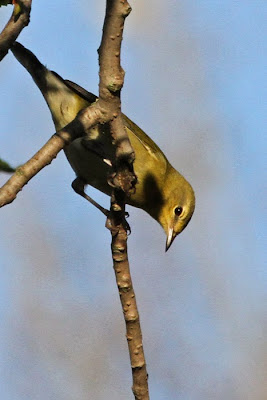 The Switch brought us our first notable movement of Yellow-rumped Warblers today, but with them came another classic October switch - the Magic Trees were plugged in and switched on!! Siberian Elms over a certain age have deeply fissured, craggy bark which serves as a wintering location for aphids. Once a few cooler nights kick in, the aphids turn up on the bark of the trees and the warblers have discovered this - like this Tennessee Warbler, photographed in the original - and still best - Magic Tree in Bill and Edie Schuhl's garden at Cape May Point. Stop by the Northwood Center for updates on which elms are currently producing the best birding [photo by Mike Crewe]. 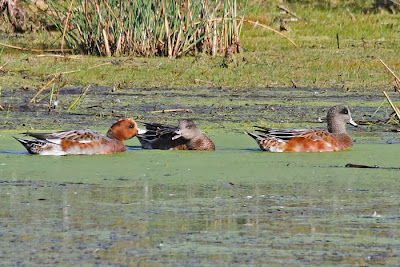 The Switch usually also brings a change to the ponds at Cape May Point, with outgoing shorebirds giving way to incoming ducks. The male Eurasian Wigeon seen here having a conversation with a female American Wigeon turned up at the state park just a few days ago and is most likely the same male that has appeared around this time for several years now [photo by Mike Crewe]. 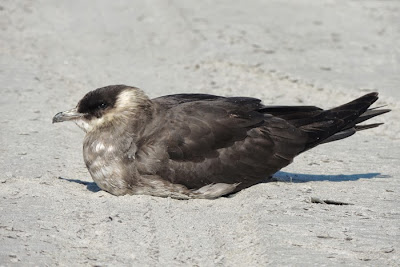 Of interest in the area recently has been a peculiar run of jaeger sightings on land. Jaegers making landfall at Cape May are very rare, but this Parasitic Jaeger, photographed at Stone Harbor Point on 1st is the third jaeger (two Parasitics and a Long-tailed) to have appeared on Cape May beaches in the past few weeks and gives certain cause for concern. When standing up, this bird could be seen to be extensively oiled below with a greasy substance and it seems likely that some unpleasant spillage is swilling around offshore somewhere. Most birds like this one die by ingesting the oil when they try to preen it out of their feathers [photo by Megan Crewe].

With promises of some reasonable migration weather to come in the next few days, it's time to get out into the field...﻿
Posted by Mike Crewe at 12:34 AM