"How do you know it's a Parasitic Jaeger?"

The title of today's blog was far and away the commonest question that I heard asked at Cape May Point today; the reason being that a Parasitic Jaeger decided to completely ignore all the text books and do what no self-respecting Parasitic Jaeger would normally do, and that is, put in a land-based appearance on the East Coast of the USA.

Despite being the commonest of the three jaeger species in South Jersey, experiences with this species usually involve distant views of birds chasing terns and gulls, well offshore in The Rips. Tom Reed was surprised to get a few shots of this bird as it passed all too quickly over the Hawkwatch Platform on Saturday, but it was an even greater surprise to all present when the bird reappeared today and parked itself on Bunker Pond. After 20 minutes or so, it lifted off and flew over to the beach, remaining on the sand just west of the bunker for well over an hour. Eventually the jaeger took off and flew around for several minutes before settling on Lake Lily. After departing the lake, it was not reported again today, but may reappear tomorrow.

So, how do we know it's a Parasitic Jaeger? Jaegers are notoriously difficult to identify to species, mainly because there is a certain amount of overlap in size between the species, and because there is much variation in plumage at all ages. We can start by ageing the bird which in this case is, fortunately, very easy. The whole plumage shows more or less equal amounts of wear with no signs of there being feathers of different ages present. In addition, there is no sign of a dark cap. These two facts add up to the bird being a juvenile. With this in mind, there is now a quick and easy way to identify the species - juvenile Parasitics are the only Jaegers to show crisp, well-marked pale tips to the primaries. A bird actively feeding a mile offshore would be much harder and identification would rest on more subtle differences in body and wing structure, and the amount of white in the primaries.

A Parasitic Jaeger resting on a New Jersey beach is not really an indication of a healthy bird and there is a fair chance that this bird is not well. With no obvious outward sign of injury it is difficult to know what is wrong but maybe it will recover and carry on south for the winter. Here's a few annotated pictures of today's star visitor to Cape May Point. 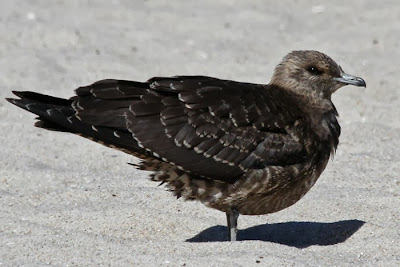 Parasitic Jaeger is 'Mr Average' when it comes to jaegers - larger than a Long-tailed but smaller than a Pomarine, and with an 'average'-sized bill. Overall, this is a typical intermediate morph bird with chocolate brown upperparts and well barred underparts. Note the obvious pale tips to the primary flight feathers [photo by Mike Crewe]. 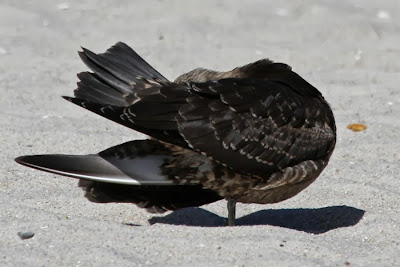 When preening, our bird conveniently gave us a good look at its tail feathers. Notice that the two central feathers are a little longer than the rest of the tail and have sharply pointed tips [photo by Mike Crewe]. 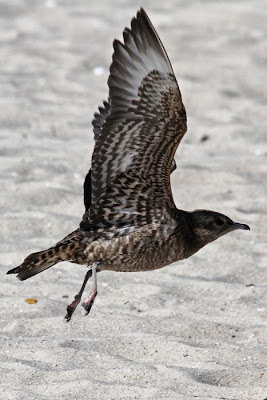 In flight, more of the underparts are visible and the bird appears overall much paler. Note the extensive amount of white in the base of the primaries [photo by Mike Crewe]. 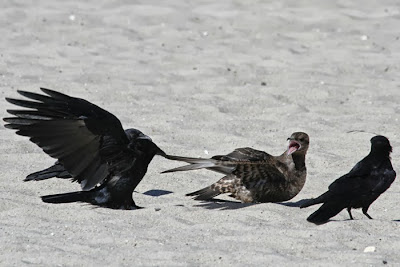 Perhaps the biggest indication that our bird is not 100% fit came when the local Fish Crows dropped in to investigate it. Crows have an uncanny knack for spotting anything living that is not entirely fit and will sometimes relentlessly harass injured or dying creatures. Here, one of the two crows on the left has hold of a primary and is giving it a good tug. Happily, our jaeger came out of this experience unscathed [photo by Mike Crewe]. 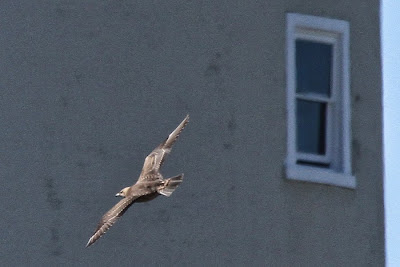 Finally, yes, it's Cape May, so here's the obligatory lighthouse shot... [photo by Mike Crewe]
Posted by Mike Crewe at 10:58 PM