Long-tailed Jaeger and other Cape May Craziness!!

In a game of two halves, today was something of a Cape May Classic; one of those days when you drag yourself out of bed at O'dark thirty, both eyes on one side of your face and your tongue feeling lke a felt ferret. You really could do with another two hours in bed, but you just know that, if you don't get up, you're going to miss something - and you'll regret if for an awfully long time.

The weather was strangely variable today, with winds beginning in the NW and veering to the East and producing conditions that made it difficult to predict what birds would do. The dike flight at Higbee Beach was not big, but produced some interesting birds (see Sam's Post), while our Higbee Beach walk this morning was tricky to say the least - gusty winds kept birds down in cover but we slowly built up a nice list that included a Veery feeding on grapes, a scattering of Baltimore Orioles and Blue-gray Gnatcatchers and some skulking Common Yellowthroats. The highlight of the walk though (albeit brief) was the extraordinary sight of a perched Common Nighthawk being mobbed by a Blue-winged and a Golden-winged Warbler, two Northern Parulas and some Carolina Chickadees!

The Hawkwatch beckoned but, with winds veering quickly and then dying off, the flight of hawks headed in completely the wrong direction; though raptors were passing through Cape May Point, seeing tested the patience of Job as birds went stratospheric and headed out over the bay at a height of several thousand feet. Over 170 Ospreys were logged passing south today, but many were the merest specks in the sky and Tom Reed had to resort to a prone position to have any chance of locating anything. With cloudless skies and calm conditions, the heat haze frazzled the landscape and the afternoon looked like it would tail off as an un-noteworthy event. But it wasn't to be as news soon broke of a juvenile Long-tailed Jaeger on South Cape May Beach, to the south of The Meadows. This was a chance not to be missed and anyone in the position to do so was soon on the spot and enjoying a bird that is more than a little tricky to get onto your Cape May list. Though the bird was on view for some time, it eventually headed out toward 2nd Avenue jetty, where it seemed to take great pleasure in breezing through the Black Skimmer flock and harassing a Forster's Tern or two. The bird promptly disappeared but was later refound by Richard Crossley at Poverty Beach.

Though the jaeger was very mobile today - and was surely the bird seen by Tom Reed briefly from the Hawkwatch Platform yesterday - it is quite possible that it will remain in the area for a few days, so it is worth keeping an eye out for it around Cape May, though it could feasibly pop up anywhere between Villas and the Coast Guard Unit...

Oh, and as a amazing finale to today's activities, the Minotaur V rocket launched from Virginia and headed to the moon was visible this evening from Cape May (an awesome sight from the back yard!) as a brilliant orange flare, headed right out over the ocean around 11:30pm - what a day!!

As the UK National Lottery would put it, you have to be in it to win it, so I would suggest a day in the field this weekend - start at Higbee Beach, make your way to the Hawkwatch around 10:00am, then be ready to hurtle off for who knows what in the afternoon!! 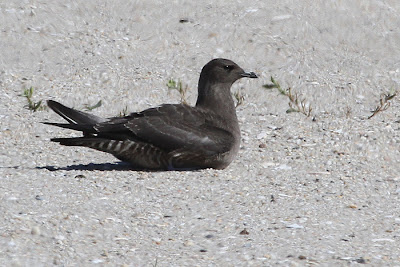 Identifying jaegers in the field is one of the most challenging tasks for a birdwatcher; there is much overlap in size between the three species, while plumages of all three are highly variable and pinning down diagnostic field characters are not easy. When first located today, the juvenile Long-tailed Jaeger (aged by the overall rather plain brown coloration with contrastingly strongly-barred undertail coverts) was resting on the beach just south of the TNC's Migratory Bird Refuge (aka The Meadows). Resting birds are particularly problematic, but note the strongly bicolored, relatively small, bill [photo by Mike Crewe]. 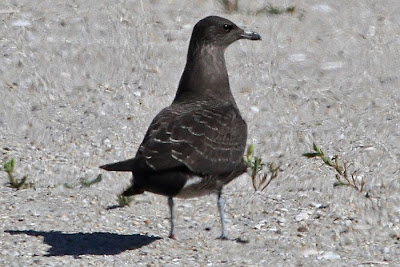 In a standing pose, the jaeger still looks relatively delicate and, in this shot, notice that the primary flight feathers are all dark, without the pale tips that are usually present on Parasitic Jaegers at this time of year [photo by Mike Crewe]. 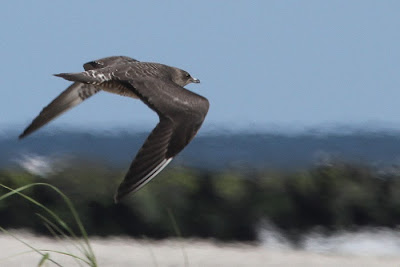 In flight, we have a few more clues to help us identify this bird as a Long-tailed Jaeger. Classically, this bird shows strong, white feather shafts to just the two outermost primaries - Parasitic Jaeger would typically show four or five white shafts. Though difficult to see here, another useful feature of Long-tailed Jaeger is that the secondary flight feathers tend to be contrastingly darker than the wing coverts. In Parasitic Jaeger, the secondaries and wing coverts tend to be more uniform in color [photo by Mike Crewe]. 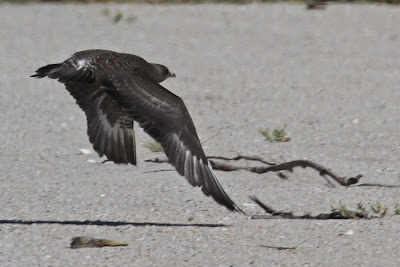 As an exercise in identifying birds by photographs after the event, this photo - if the only one obtained of this bird - could have been problematic. Here, the wings are over-extended as the bird lifts off powerfully and there appears to be extensive white on the upper side of the primaries. In fact, this is due to the angle of the feathers relative to the sun, as well as the posture revealing pale bases to the primaries that under most viewing conditions would normally be unseen - it's always wise to take as many photos as possible to help build up a better, more accurate impression of a bird [photo by Mike Crewe]. 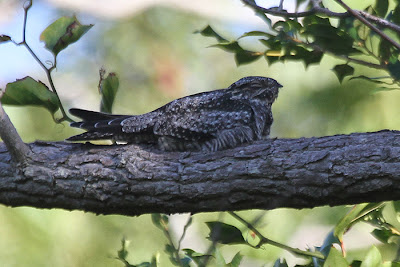 It's a good time of year to be checking that that odd piece of wood really is part of the tree! This Common Nighthawk was perched near the SW corner of the first field at Higbee Beach today [photo by Mike Crewe]. 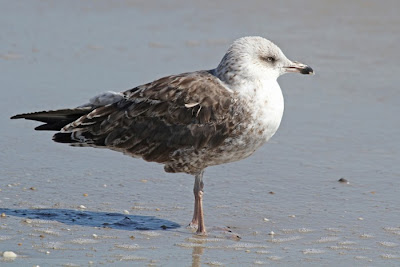 Fieldcraft lesson number 378 - always be on the look-out for birds; September is a great month to be looking for Lesser Black-backed Gulls at Cape May and I counted nine along South Cape May Beach as I yomped down toward the jaeger today. This typical second calendar year bird shows a much paler head than an American Herring Gull of comparable age, with a clearly defined, bicolored bill and a pale eye [photo by Mike Crewe]. 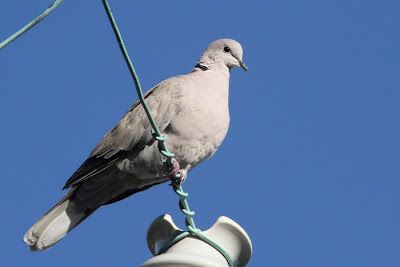 As if you need reminding - Eurasian Collared Doves are still hanging out along Lincoln Avenue. Currently, three birds are being reported, one of which appears to be a juvenile so it does look as though our single pair bred again this year. Here's one of the adults near Lincoln and Lehigh this evening [photo by Mike Crewe].
Posted by Mike Crewe at 12:30 AM