With the marvel of another fall migration at Cape May now well under way, the bird stories are coming in thick and fast. Perhaps the most popular bird of the past few days has been the American Bittern that has been steadily demolishing the frog population on Bunker Pond at Cape May Point State Park. What has made this bird an exceptional experience for its admirers is the fact that it has spent a great deal of each day feeding right out in the open - often in full view of admirers on the Hawkwatch Platform. Bitterns can often be notoriously difficult to see as they spend the majority of their lives feeding within dense, marshland vegetation, so this has been a wonderful opportunity to get to see a bird that is not uncommon but is rarely encountered by most people.

Since there are other herons passing through on migration right now which could be confused with American Bittern, here are some pictures taken around Cape May in just the last few days and which highlight the differences between the species. 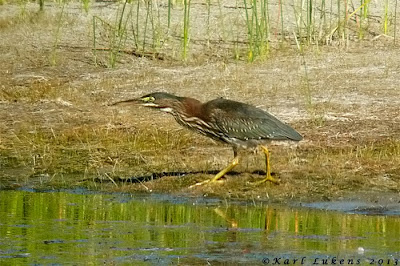 Juvenile Green Heron on our Wednesday morning, Cape May Point walk. Note the overall dark coloration to the back, wings and top of head, the rusty tone to the neck and the relatively small, pale spots on the wing coverts [photo by Karl Lukens] 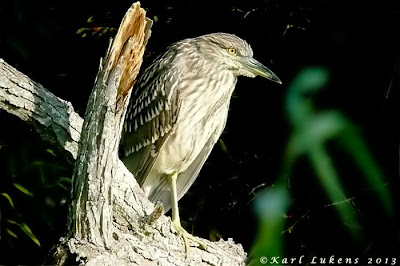 Juvenile Black-crowned Night Heron at The Beanery on our Saturday morning walk. In this species, note the overall paleness to the underparts, the regular lines of narrow streaks across the whole head, neck and underparts, and the relatively large, pale spots on the wing coverts [photo by Karl Lukens]. 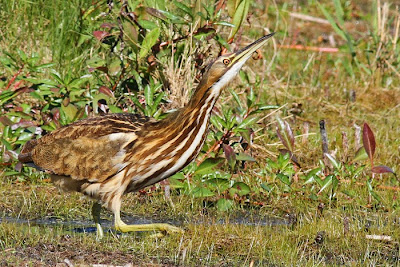 Our friendly, neighborhood American Bittern on Bunker Pond. Note the broad, warm brown streaks on the lower neck, the lack of spots on the wing coverts and the clean, white throat [photo by Mike Crewe].

Other migration spectacles around Cape May at present have been captured by an array of photographers, snapping away at anything that moves it seems! Here's a few that I received recently. 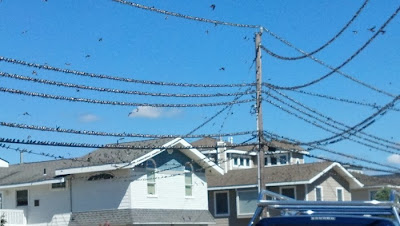 Tree Swallows always create spectacular shows when they gather in great numbers around Cape May. Tree Swallows are around our area for several months during the fall and, during this time, they gather to feed on the ripening berries of the bayberry bushes along the coastal dune habitats. Traditional areas to see these gatherings are at Avalon, the Two-Mile Beach reserve just south of Wildwood Crest and South Cape May Beach. The flock in the picture above was photographed recently in Avalon [photo by Ralph Johnson]. 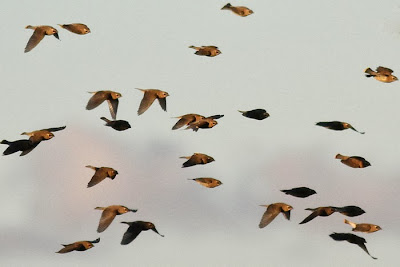 Flocks of trilling Cedar Waxwings, buffetting around on a blustery day in late September are always a delight to watch. Look for them during early morning flights of birds at Higbee Beach or around Cape May Point [photo by Mike Crewe]. 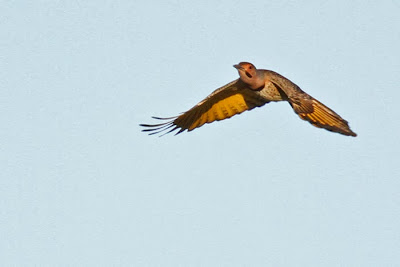 The second half of September usually marks the start of the main Northern Flicker migration through our area. Though numbers of birds are much lower than they once were, parties of up to 100 birds can still be seen, especially at Higbee Beach during early morning flights. Seeing flickers in flight is the best way to enjoy their amazing golden wings [photo by Mike Crewe]. 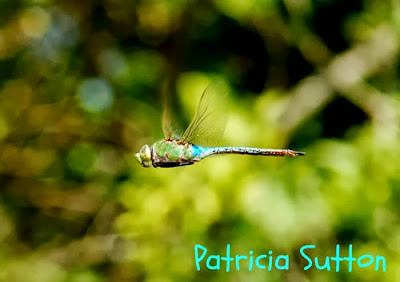 Anyone walking around Cape May looking for birds over the past couple of weeks surely can't fail to have noticed the huge flights of dragonflies that we have been witnessing this year. Numbers and species make-up have varied, but Black Saddlebags, Swamp Darner and Green Darner have made up the bulk of the southbound migrants. Pat Sutton captured a great image of this Green Darner on one of the recent big dragonfly days. 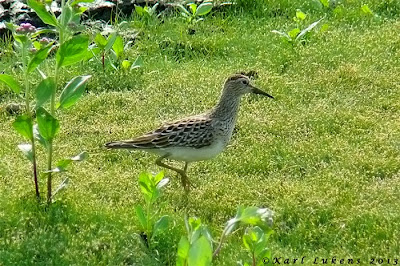 Shorebird migration is now past its peak for this year, but there are still good birds to be found if you know where to look. This Pectoral Sandpiper showed well to the whole group on one of our recent Meadows walks on Monday morning [photo by Karl Lukens]. 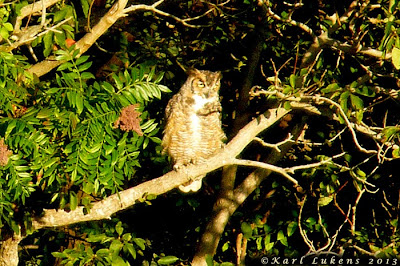 Ever tried one of our evening walks at The Meadows? If not, you may be missing seeing this fabulous Great Horned Owl that has been posing in trees overlooking the site in the evenings (photo by Karl Lukens). 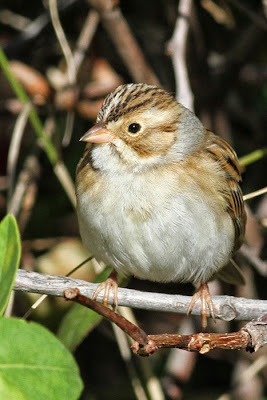 Though typically a bird of much further west than New Jersey, Clay-colored Sparrows are now expected in small numbers at Cape May in fall. Look for them in open, grassy areas, usually with a few bushes to hide in if danger threatens. Cox Hall Creek WMA, the dunes and beach cross-overs around Cape May Point and the fields at Higbee Beach are all traditional places to find them. Look for an overall rather small and pale sparrow with a finely streaked crown, well-marked face pattern, brown rump and contrasting gray nape patch [photo by Mike Crewe].
Posted by Mike Crewe at 5:16 PM