Well thankfully, as predicted, birds descended on Cape May today and, given the prevailing conditions, it is no surprise that Higbee Dike was the place to be at first light this morning. Though there wasn't a big flight today it was, nevertheless, well worth being there, as pockets of mixed warblers swept past at knee height, interspersed with a good showing of Baltimore Orioles, Scarlet Tanagers, Blue-gray Gnatcatchers and Rose-breasted Grosbeaks. Ruby-crowned Kinglet, Dickcissel and Red-headed Woodpecker added to the variety, while commonest species included Bobolink, Cedar Waxwing, American Redstart and Blackpoll Warbler, as well as a good showing of Black-throated Blue Warblers. Glen Davis's full 'official' count for Morning Flight will be posted on our Seasonal Research page.

In contrast to the dike, the fields were pretty quiet by all accounts, although a quick look after I left the dike revealed two Cape May Warblers and three Veeries at the north end of the main trail. An Olive-sided Flycatcher was the highlight of our Beanery walk this morning, with a smattering of warblers, two Yellow-billed Cuckoos and other migrants making for a fun walk. I haven't heard the final score from the Hawkwatch yet today, but when I stopped by there before lunch there was a nice movement of birds shaping up - my brief visit produced three Bald Eagles, Peregrine, Broad-winged and Red-tailed Hawks, male Northern Harrier and a run of American Kestrels.

Finally, if you are in town, it's worth staying out a little later of an evening now and checking ponds at The Meadows; both Sora and Common Nighthawk were there last night, so I reckon there will be a few pairs of eyes scanning this evening. 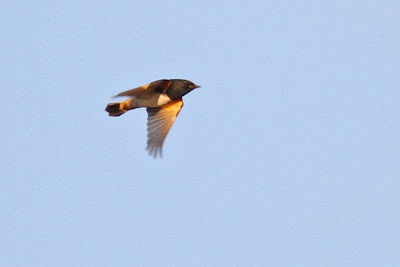 This morning's American Redstart flight was early enough in the season to include a high percentage of colorful adult males [photo by Mike Crewe]. 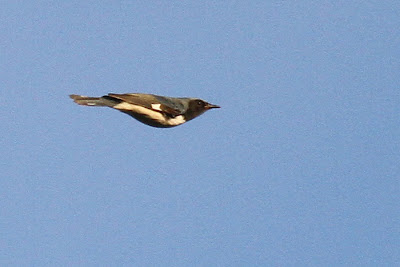 Even in flight, that white 'pocket handkerchief' helps to make a Black-throated Blue Warbler readily identifiable [photo by Mike Crewe]. 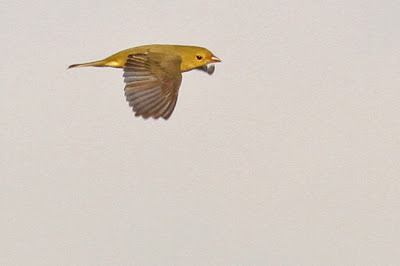 A small run of Scarlet Tanagers accompanied the warbler flight at Higbee Dike this morning [photo by Mike Crewe]. 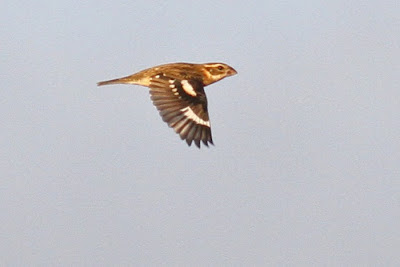 A heavy head, chunky bill and a lot of white in the wing are good pointers toward an adult male Rose-breasted Grosbeak [photo by Mike Crewe]. 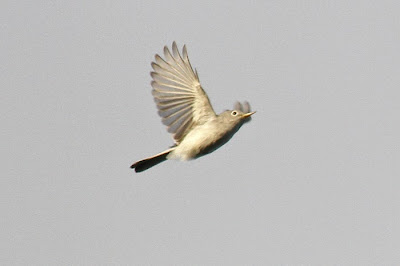 In complete contrast to a grosbeak - small-headed, small-billed and without wingbars all add up to Blue-gray Gnatcatcher [photo by Mike Crewe]. 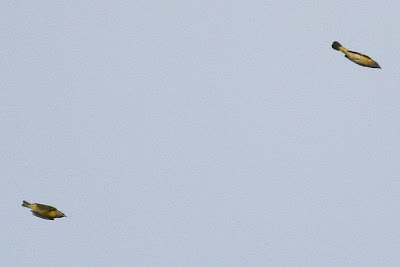 In the 'one that got away, subsection bird' category, comes the little guy on the left. I was trying to photograph the American Redstart on the right and discovered the Nashville Warbler on the left only after I downloaded the photo! Now, would you count it on your list?! [Photo by Mike Crewe] 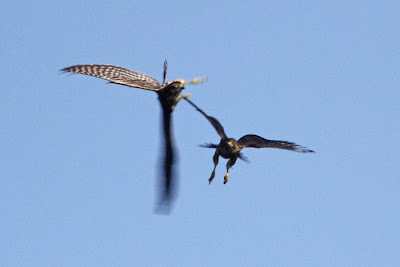 And finally, 'the one that got away, subsection photograph' category. I could pretend that I used a slow shutter speed deliberately to create the feeling of movement here, but really, I messed up by having the camera on the wrong setting! I was photographing the Merlin on the right as it headed straight toward the Hawkwatch Platform when the crazy guy on the left came hammering in and made a fool of himself! As we've said before, Merlins really can't pass anything moving without giving it a good seeing too... [photo by Mike Crewe].
Posted by Mike Crewe at 4:26 PM