Warblers at The Point - and more...

Though a run of unfavorable winds - ranging from north-east to south-east - seems set to continue to plague us for a few more days, there is, nevertheless, a nice scattering of birds around Cape May Point at the moment. The trees around the Northwood Center and the eastern side of Lake Lily have consistently provided good birding opportunities over the past few days, with a dozen or so warbler species being noted - including two Bay-breasted Warblers that hung out together for quite some time. Not too far away, off Stevens Street, banders reported Hooded, Mourning and Canada Warblers, Yellow-bellied Flycatcher and Ruby-crowned Kinglet in a single yard.

Over the past week or so, a nice run of good birds has shown up and provide a good, solid opener to the main event still to come. Highlights and birds of interest of recent days have included Parasitic Jaeger, Northern Gannet and four Brown Pelicans off Avalon on 8th, Yellow-headed Blackbird at Bunker Pond on 9th, Lark Sparrow at Higbee Dike and Clay-colored Sparrow at Brigantine on 9th, four Baird's Sandpipers reported briefly at The Meadows and a Sora there on 13th, Olive-sided Flycatcher at the Rea Farm and Lark Sparrow at Davey's Lake on 14th, Red-headed Woodpecker at Cape May Point on 15th, a showy American Bittern and a fly-by group of five Hudsonian Godwits seen from the Hawkwatch Platform on 17th. The Long-tailed Jaeger seems last to have been seen on 13th.

Not sure what to make of the weather over the next couple of days, but this time of year always produces good birding at Cape May - and sometimes the 'wrong' weather brings re-orienting strays to the point. Tom Reed predicted a Northern Wheatear at the point today. Maybe it was here, just not found, but there's plenty of places to go looking. This morning's state park walk saw plenty of birds breeze in and out of our field of view, from two Least Flycatchers and a Cape May Warbler at the parking lot to a noisy group of two adult and two juvenile Caspian Terns passing low overhead. At least four Lesser Black-backed Gulls were on the south beach and a good mix of herons and egrets continue to pass through the area. 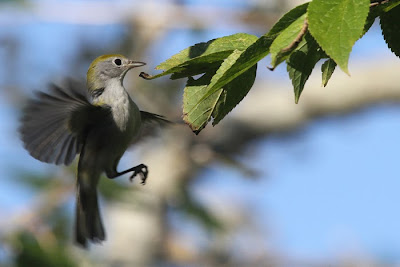 Keep an eye out anywhere around Cape May Point for warblers over the next couple of weeks. This agile Chestnut-sided Warbler was leaf-gleaning around Dwarf Hackberries on East Lake Drive this evening [photo by Mike Crewe].
Posted by Mike Crewe at 10:24 PM