From Hawkwatch to The Dike

Having kicked off the 2013 Hawkwatch on its first day at the weekend, I managed time on Tuesday morning to join Sam Galick on Higbee Dike, on what proved to be a day that wasn't massive on birds, but certainly provided plenty to enjoy. This was actually the first time I had an opportunity to use a faster-focusing camera lens that I had bought some while ago and was hoping that it would cope with the tiny specs zipping overhead - it did! Higbee Dike can seem daunting to a lot of people in so many ways. The dike itself is daunting enough and, this year, another six feet or so has been added to the height. The bank is pretty steep and not recommended for anyone without Rocky Mountain Goat blood in their veins, but there is always the viewing platform on the other side of the track which offers plenty of good views of passing birds.

If you ascend to the top of the dike, you will find yourself right at tree top height, indeed, slightly higher than that now, and with a commanding view of the whole area. Much of what passes the dike has, traditionally, been counted by ear - birds being identified by their distinctive (to some at least!) flight calls. But things are changing a little now, with modern digital cameras producing more and more pixels and allowing finer and finer detail. But there's another way that increased pixels help - you can zoom in to a smaller and smaller part of the picture and still have a surprising amount of detail. This latter system is what works on the dike. You might not get a prize-winning photograph, but you get a picture of a readily identifiable bird - even when it's a tiny blip, way, way, out there. Sam Galick is one of a number of growing 'masters of the art' of using a camera as an identification tool and you can enjoy regular posts from him this season on our Seasonal Research blog. For those who haven't made the crossover yet, here's a few pictures from my first attempts on the dike... 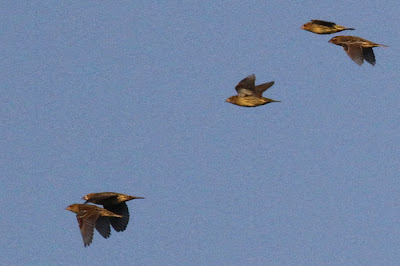 Groups of Bobolinks were pouring through Cape May yesterday morning with over 1300 logged at the dike. With so many going through, it wasn't too hard to get passable photos. Heavy bills, streaked flanks and double wingbars are all visible here; we even had some birds with a few black feathers left over from breeding plumage, while one group contained a young male Yellow-headed Blackbird [photo by Mike Crewe] 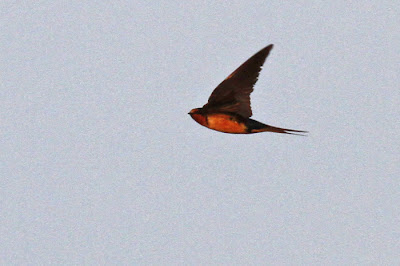 Swallows are readily identifiable by their streamlined shape and relatively long, pointed wings. Add rusty underparts and a long, forked tail and you have a Barn Swallow [photo by Mike Crewe]. 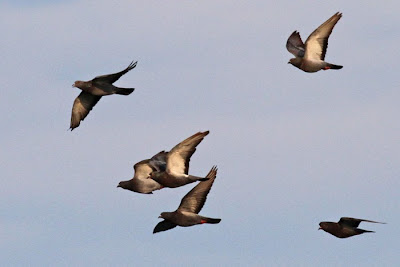 Don't be afraid to take pictures of common birds such as these Feral Rock Pigeons. Taking photos of common birds and studying them is a good way to familiarize yourself with them. These then become your 'yardsticks' by which you measure other, less common, species. Note the stocky bodies and relatively small heads typical of pigeons and doves. Feral Rock Pigeons most closely resembling their wild counterparts have very white underwings with neat, black trailing edges [photo by Mike Crewe]. 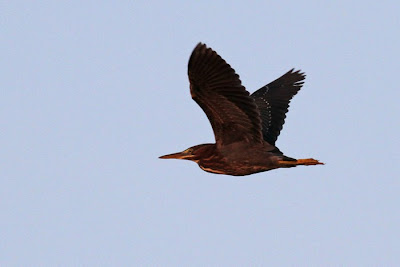 Sometimes you have to remember to allow for the amber glow of early morning light. Remove the orange cast and this thick set bird with long bill and feet, broad, rounded wings and a well-streaked neck soon becomes a juvenile Green Heron [photo by Mike Crewe]. 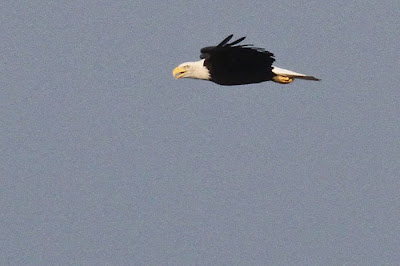 Of course, some birds are pretty obvious whatever the lighting conditions! An adult Bald Eagle gave us a quick sideways glance as it cruised by. The power of modern cameras is demonstrated here by the fact that this bird was flying by way out over Higbee Beach - quite some distance from the dike [photo by Mike Crewe]. 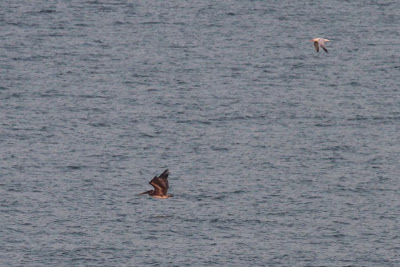 Birds even further out over the water can also be picked out with the camera and identified. This young Brown Pelican lumbered past well offshore, accompanied by a Royal Tern yesterday morning [photo by Mike Crewe]. 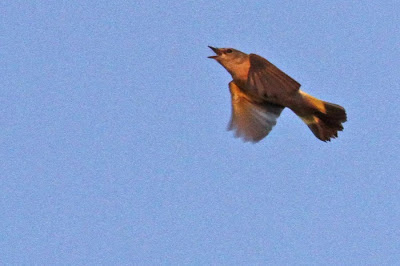 But it's warblers that people come to see at the dike and they offer some rather unique challenges. Quick and frequent changes of direction and a generally rather rapid flightline means that many, many pictures never see the cold light of day and, if you try the camera ID method, you will spend more time deleting than saving. But the lucky shots will come, like this American Redstart, rising out of the reeds along the dike and calling as it passes by in the warm glow of an early morning well spent on the dike [photo by Mike Crewe].

Recent Sightings
With the season really taking off now, there's plenty of birds lining up to be seen around Cape May and more to follow in the next couple of days I reckon. On September 1st, another early Philadelphia Vireo was at Cox Hall Creek WMA and a White-rumped Sandpiper was reported from the South Cape May Meadows (still present on 2nd at least, when joined by a Baird's Sandpiper), while an early juvenile Bonaparte's Gull was photographed at the state park on August 31st. Carol McClelland reported 10 Piping Plovers still enjoying the beach at Stone Harbor, while the same location has been holding very good numbers of Red Knot recently. On September 2nd, a Western Kingbird flew south at Higbee Dike and was later seen a little closer in the first field at Higbee Beach, from where it flew off toward the bayshore. September 3rd kicked off with a young male Yellow-headed Blackbird passing south with Bobolinks at Higbee Dike and another, or perhaps the same, Western Kingbird, this time passing Cape May Point. Late on September 3rd, a Say's Phoebe was located behind the dunes by the Plover Ponds at the state park by Tom Reed. There has been no further reports of it today but -  keep your eyes peeled!


Marbled Godwits were once rare on the East Coast but are now to be expected in fall, with some birds often remaining through much of the winter. Keep an eye out for them now on our boat trips into the back bays; this one was photographed by Charles Krueger from The Osprey on 1st. 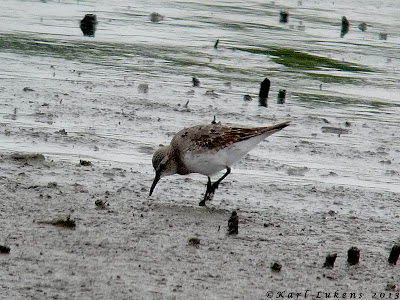 White-rumped Sandpipers are regular passage migrants in small numbers; look for a larger, longer-winged bird than accompanying peeps - and an all-white rump if you see it fly [photo by Karl Lukens]. 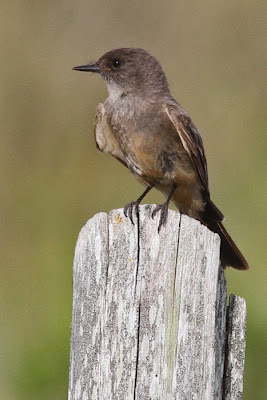 Say's Phoebe at Cape May Point State Park on September 3rd - a heavily-molting adult and perhaps not the prettiest of flycatchers...[photo by Mike Crewe]. 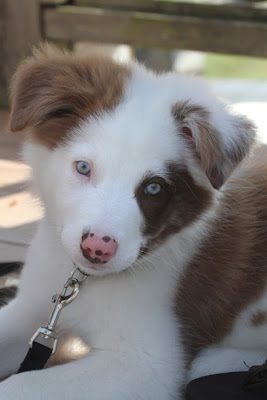 We like to welcome all newcomers to our community of Cape May birders, so please welcome the latest addition. If you visit the Hawkwatch Platform or Higbee Dike you'll run into Captain soon enough - he's getting far too much attention already! [photo by Mike Crewe].
Posted by Mike Crewe at 4:04 PM