CMBO is pleased to provide weekly summaries of the Cape's birding highlights. Coverage is limited to sightings in Cape May County. Readers should keep in mind that some reports may not be confirmed. Information and photos that may be of use for weekly summaries should be emailed to compiler Tom Reed (coturnicops at gmail dot com).

The period began with warm conditions ahead of a strong cold front that arrived during the overnight hours 21-22 Sep. Decent hawk and songbird movements took place after the passage of the front, and NW/N winds persisted through 24 Sep. High pressure dominated Cape May's weather through the rest of the period, with winds increasing from NE/E through 27 Sep. Notable birds during the period included Eurasian Wigeon and American Avocet.

HERONS THROUGH SHOREBIRDS
At least one American Bittern was observed throughout the week at CMPSP (m. ob.).  A single Cattle Egret was observed in Goshen 27 Sep (JS). Small movements of Great Blue Herons and Black-crowned Night-Herons have occurred during recent nights with E winds.  Hawk flights were again light, with the exception of 1,414 birds counted at CMHW 22 Sep (TR). Selected daily maxima for the period included 531 Sharp-shinned Hawks, 127 Cooper's Hawks, 485 American Kestrels, and 107 Merlins on 22 Sep, along with 163 Ospreys and 86 Peregrine Falcons on 25 Sep (TR). Multiple Soras continued to show sporadically at SCMM through the week. An American Golden-Plover flew past CMHW 21 Sep (RC et al.), and the same or another was present at SCMM 21-22 Sep (RH, KH, m. ob.). Thirteen Whimbrel and two Marbled Godwits were observed in the back bays from The Osprey tour boat 25 Sep (m. ob.). An American Avocet spent most of 27 Sep at Bunker Pond, CMPSP (TR, m. ob.). Eight Stilt Sandpipers were also present there 27 Sep (TR). 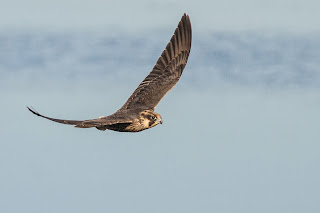 [Peak Peregrine Falcon flights will likely occur during the next ten days;
225 were counted at CMHW 25-28 Sep. Photo by Tom Reed.] 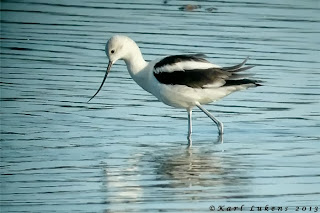 [American Avocet is a rare species at Cape Island. This individual was a
one-day wonder at CMPSP 27 Sep. Photo by Karl Lukens.]


JAEGERS THROUGH WOODPECKERS
At least seven Parasitic Jaegers have been seen in "the rips" off Cape May Point this week (RC, m. ob.). Two or three Eurasian Collared-Doves remain at Cape May Point. Common Nighthawks continue to be seen during some evenings, most often hunting between SCMM and CMPSP. A Chuck-will's-widow flew in from the ocean at CMPSP 25 Sep (TR). Small numbers of migrating Red-bellied Woodpeckers have been seen from CMHW recently, and a Red-headed Woodpecker flew past CMHW 23 Sep (TR).

NUTHATCHES THROUGH WAXWINGS
Red-breasted Nuthatch, a species that is scarce this season, was seen from CMHW 25 Sep (TR). Nocturnal movements of thrushes were noticeable on a few nights, with a decent number of Gray-cheeked Thrushes over Cape May City 23-24 Sep (MO'b, TR). The season's first American Pipit was noticed at the Higbee Dike 25 Sep (SG). Numbers of Cedar Waxwings are rising; 391 were counted at the Higbee Dike 23 Sep (SG).

WARBLERS THROUGH FINCHES
The Higbee Dike saw a number of quiet days, though a nice flight on 22 Sep included 1,077 birds including 27 Cape May Warblers and six Tennessee Warblers (SG). Species highlights from the Dike included Bay-breasted Warblers 22 and 23 Sep, Hooded Warbler 25 Sep, and Connecticut Warbler on multiple dates (SG). Fair numbers of warblers were found in residential Cape May Point, with the east side of Lily Lake being the best area in recent days. A Mourning Warbler was found at the Two Mile Beach tract of Cape May NWR 25 Sep (VE). Clay-colored and Lincoln's Sparrows were found at the Dike 25 Sep (SG). Clay-colored Sparrow was also found at CMPSP and at Field #5 at Higbee Beach WMA during the week. 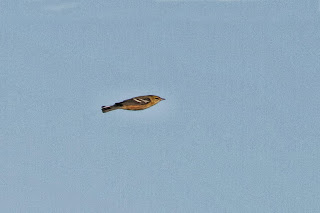