Never a dull day at the Hawkwatch

Day one of the 2013 Cape May Hawkwatch; so how did it go? Well, if you were in town looking for hawks, then it's fair to say it wasn't your lucky day. With just two Ospreys and a Merlin making it onto the official count sheet, you might by very easily led into thinking that we had a dull day on the Hawkwatch Platform today, but no, not a bit of it. Unlike other hawkwatches that might be situated on a remote hill top somewhere, the Cape May Hawkwatch pretty much always provides something to look at and Tom Reed's total of 83 species logged from the platform is testament to a great day out for anyone there to enjoy it.

With two American Golden Plovers moving through almost at the very start of the day, it was soon clear that it was going to be a good shorebird day and, with a breezy south-westerly drifting in off the bay, many of the shorebirds were passing right over the platform. With a reasonable Bobolink flight early on, a good mix of terns, gulls and skimmers and an almost full suite of swallows and martins, today was a great day to be out witnessing visible migration at its very best. Here's a few photos that sum up the day. 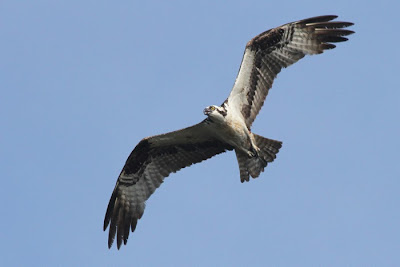 Ospreys are certainly contemplating heading south now, but most of today's birds, like this adult, were happy to just catch sunfish in the sunshine at Bunker Pond today [photo by Mike Crewe]. 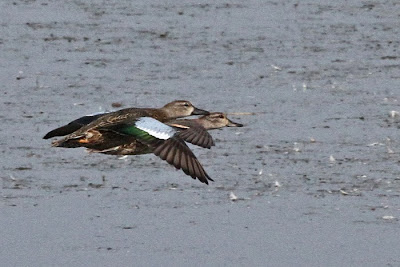 A fair range of ducks are already sneaking back into our area from breeding grounds further north - though most males are still in their rather drab summer plumage right now. This was almost a nice opportunity to compare Green-winged and Blue-winged Teal in flight but the Green-winged kind of got lost round the back there somewhere [photo by Mike Crewe]. 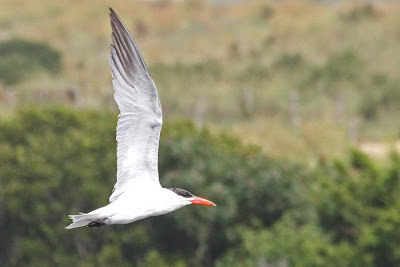 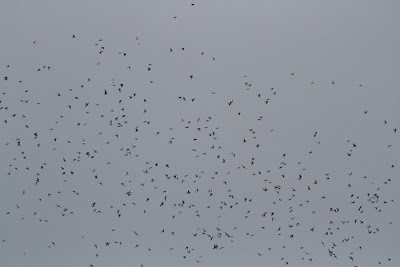 A good movement of swallows and martins took place, but most eye-catching in this family today was the steadily growing flock of Tree Swallows along the dune edge and around Bunker Pond [photo by Mike Crewe]. 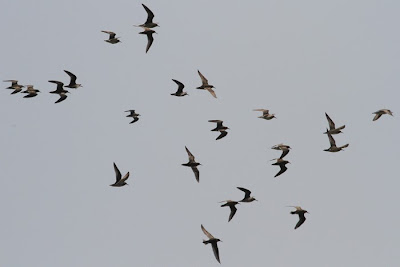 Steady numbers of shorebirds passed the Hawkwatch Platform throughout most of the day today, including some very obliging flocks of Pectoral Sandpipers [photo by Mike Crewe]. 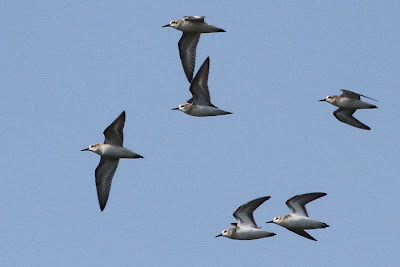 Semipalmated Sandpipers cutting the corner of Cape May Point and giving a chance to photograph a few shorebirds heading left instead of right! [Photo by Mike Crewe] 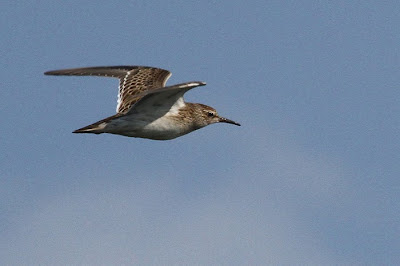 Patience pays off when opportunities are coming thick and fast. This Pectoral Sandpiper gave a great opportunity for photographs as it whizzed past the platform and headed toward the bay [photo by Mike Crewe]. 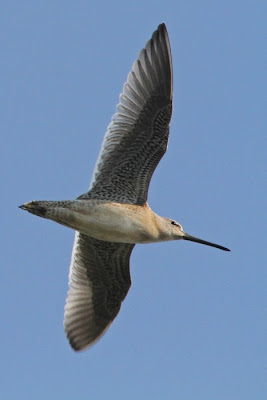 Squeeky clean plumage and a soft, cinnamon wash to the chest help to mark this Short-billed Dowitcher out as a juvenile, heading south for the first time in its life [photo by Mike Crewe]. 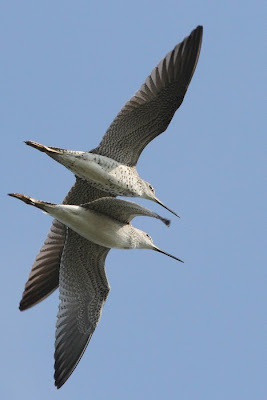 The grand finale - formation flying by a brace of Greater Yellowlegs! Differences in underpart and underwing patterning between molting adult (upper) and juvenile Greeater Yellowlegs is nicely demonstrated here [photo by Mke Crewe].
Posted by Mike Crewe at 1:12 AM