Those who know me, know that I am very cautious when it comes to making predictions of good birding days at Cape May, but tomorrow is shaping up to produce something interesting. With winds turning to north-westerly last night, there was some hope that we would have a fallout this morning, but that idea was knocked on the head by the thunderstorm that passed to the north of us, cutting off any flow of birds that might have been heading our way. Perhaps as a result, our Higbee Beach walk this morning was pretty quiet for songbirds, but we nevertheless still saw a nice range of bird species. A good flight of Royal Terns was taking place, with birds moving north on a localized feeding mission - a couple of Caspian Terns put in an appearance too, one of which made a half-hearted mobbing attempt at an adult Bald Eagle that was cruising right over our heads at the time.

A quick check at the Hawkwatch Platform at lunch revealed a good falcon flight shaping up - if you're in town, I suggest getting down there this afternoon as the American Kestrel and Merlin flight that is currently taking place may well continue this afternoon.

In the hope of many more things to report on in the coming couple of days, here's a set of random pictures that have been waiting for an airing over the past week... 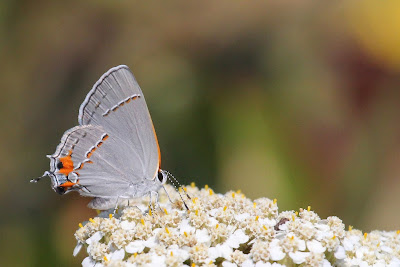 Mike Newlon recently sent me a fine trio of hairstreak photos that he shot at Higbee Beach recently, and which I felt were well worthy of a wider audience. Hairstreaks are small and perhaps easily overlooked, but keep an eye out for them around Cape May Point during the fall. Gray Hairstreak (above) is the most likely species you may encounter during September or early October and is the only one of our hairstreaks that will habitually sit with its wings open. 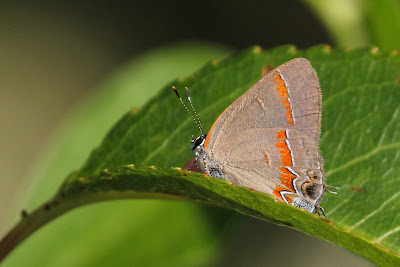 Red-banded Hairstreak is easily told from the other species by the bright, orange-red band that runs across both pairs of wings on the underside [photo by Mike Newlon] 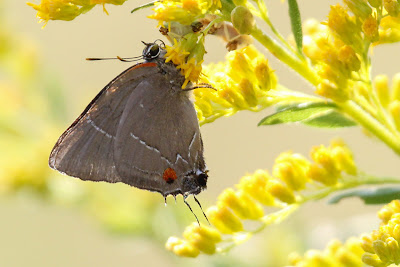 Least common of the trio here is White M Hairstreak. Compared with Gray Hairstreak, it has less red at the back edge of the hindwing, a dotted white line that forms a more obvious 'M' or 'W' mark (depending on which way up it is!) and it has a small, isolated white spot near the leading edge of the hindwing [photo by Mike Newlon]. 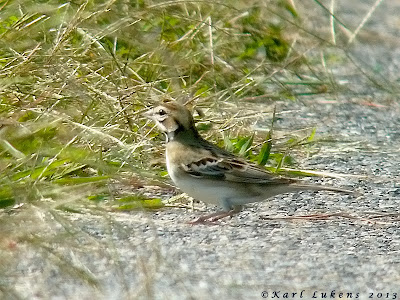 Lark Sparrows seem increasingly more regular through Cape May each fall - this one spent a few days at Cox Hall Creek WMA recently. Though this bird now seems to have moved on, there may well be more - the path behind the dune line at Cape May Point State Park is a good place to look [photo by Karl Lukens]. 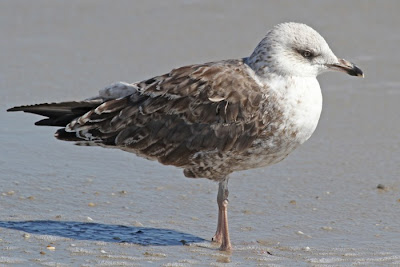 September is peak time for Lesser Black-backed Gulls at Cape May Point - check for them down on the tideline along the South Cape May beach. Highest count I have heard of over the past week is 12, with a good range of different ages represented. Once they have their slate-gray backs, that alone will distinguish them from other gulls in the area. For young birds like this one, look for a bird the size of an American Herring Gull but with plumage more like a Great Black-backed Gull; ie with a much paler head than a young American Herring Gull. Young birds like this have pink, not yellow legs [photo by Mike Crewe]. 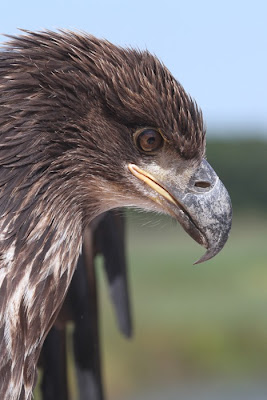 The Cape May Hawk Banding Demonstrations will be starting this weekend, Saturday September 21st and will continue to the end of October. Demonstrations take place by the Hawkwatch Platform on Saturdays and Sundays at 10:00am. This young Bald Eagle was caught by the banders this week, marking a fine start to the season for them [photo by Mike Crewe]. 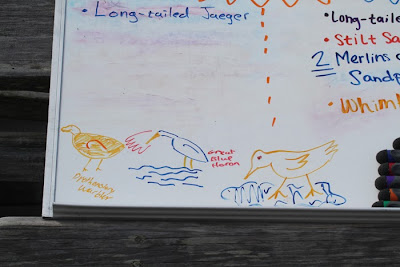 And talking of the Hawkwatch Platform, don't forget to stop and say hi to our wonderful interpretive naturalists stationed there this season. As you can see here, my visit there today revealed that they are really pushing the boat out to ensure that the very best identification skills are shared on our recent sightings board!!!
Posted by Mike Crewe at 2:24 PM